The Battle of the Boyne 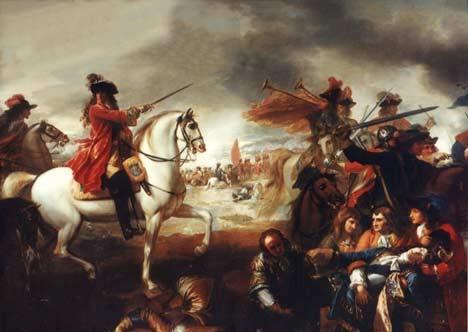 The Battle of the Boyne, which was fought in 1690, is commemorated on both sides of the divide that stands between Northern Ireland under British Sovereignty and the Southern Republic of Ireland.

‘It was old but it was beautiful, and its colours they are fine,
It was worn at Derry, Aughrim, Enniskillen and the Boyne,
My father wore it as a youth in bygone days of yore,
And it’s on the Twelfth I love to wear, the sash my father wore’.

As you can see, it is celebrated on the 12th July but typically Irish, it actually occurred on the 1st. Perhaps that is not quite fair for you see the twelve days were lost when the Gregorian calendar was adopted many years later. It is also legendary as the premier battle between Protestantism and Catholicism when the English Crown won control over all Ireland and dominance was gained by the winners – the Protestants.

It was not in fact a ‘religious’ war but more a political one with European politics taking pride of place. Within that framework there was indeed a religious aspect but it played only a minor role.

After the death of Oliver Cromwell in 1658 (curse and spit at the mention of his name), Charles Second was invited to return to England and be crowned as the rightful heir to the throne. In 1660 he did so with the ‘line of accession’ thereby restored. On his deathbed in 1685 Charles was received into the Roman Catholic Church. This did not bode well for the Protestant elite who had governed since the time of Henry the Eight.

Charles was succeeded by his son James who was to become the last Catholic monarch of the United Kingdoms of England, Scotland and Ireland. This further enraged the Protestant elite who began planning a revolt against him. Things got much darker when James produced a Catholic heir.

James’ daughter Mary had married the Dutchman, William of Orange, who was in fact his cousin. The elite ‘invited’ William to invade England with a large army from the Netherlands. This he did causing James to flee with his family to the continent. By doing so he was deemed by the government and Lords to have ‘abdicated’. William and Mary were invited to become Monarch and Queen.

James began to try to regain his throne from continental shores with the help of foreign monarchs who were sympathetic to his cause.

The scene was set for a great battle to settle the issue. James’ followers became known as ‘Jacobites’ whilst those following William were known as ‘Williamites’.

At this point, although James was Catholic and William Protestant, the forthcoming battle was not in fact being fought directly on that issue. You see, France was becoming very forceful with designs on the conquest of most of Europe. The King of France believed that if James were to be restored as King in England, he would assist him in his endeavours. Other European governments wanted to stop the French so they assisted and backed William.

Many members of the Dutch army, subjects of William, were Catholics and sided with William. In fact, and more importantly, part of his own elite force ‘The Dutch Blue Guard’ fought the battle under the Papal Banner in agreement with the Vatican. After the battle, when news of the Williamite victory arrived at the Vatican, the Pope celebrated a Mass of Thanksgiving.

The Germans hoped for a Jacobite success thereby thwarting the aspirations of the French. Most of their soldiers were Protestant and fought for James. Likewise, many English and Scottish Protestants who were loyal to James on account of the ‘line of accession’ fought on his side.

On the other hand, many Irish Catholics fought for William. Many of these were those who had gained lands from the Crown in the past and feared that they would be dispossessed if James won. The poor working class Irish Catholics fought for James in the hope that he would restore religious freedom. To complicate things a little further, some of the French regiments were composed of German Protestants and fought for James.

It therefore goes to show that the battle was little or nothing to do with religion but part of a complicated political affair to halt the rise and ambitions of the French.

The various armies arrived in Ireland and preparations were planned for the coming battle. The Williamites consisted of 36,000 men whilst the Jacobites had a mere 25,000. Both armies made up the largest battle group ever assembled in history up to that date. They formed up on both sides of the River Boyne on the West side of the city of Drogheda. There were skirmishes which took place until the Jacobites were totally outflanked in a pincer movement. Over 1,500 men were killed whilst James fled the field of battle.

His cowardice earned him the Gaelic title of ‘Seamus a chaca’ which means ‘James the Shit’.

As a result of the lost cause, thousands of Irishmen were exiled to Europe and never returned. This was known as the ‘Flight of the Wild Geese’.

Sadly, Ireland’s ‘troubles’ continued for another three hundred years with the Lambeg Drums loudly beating out each 12th July in memory of the victory (The Ulster Protestants conveniently forget the part that the many Catholics played ‘on their side’ during the battle…

Mike-The Battle of the Boyne, which was fought in 1690, is commemorated on both sides of the divide that stands between Northern Ireland under British Sovereignty and the Southern Republic of Ireland.

At the Point of the Gun