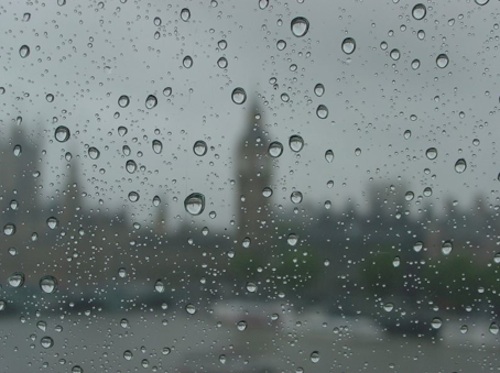 This year, during the so-called summer on this side of the pond, we are up to our necks in rain. Back in March this year, the water authorities in most of the UK announced that they were introducing a ‘Drought Order’ which basically means to us ordinary citizens a ‘hose-pipe ban’. Their main reason was that due to two successive ‘dry’ winters the water-table was dangerously low.

Typically British, it has basically not stopped raining since resulting in severe flooding in all corners of the country. Some places, particularly in Wales have had – more than once – a month’s average rainfall within twenty-four hours. One county in the north-west had three times the July average rainfall in a thirty-six hour period. Britain is not the only country to suffer. Southern parts of Russia have suffered equally as bad with many deaths as a result.

Meanwhile, on the other side of the pond in the US I read of deathly heat waves and fires……………

The ‘weather experts’ are blaming a change in direction of the ‘Jet Stream’ which usually hits Northern Ireland and Scotland. This year, for several months, it has been hitting four or five hundred miles south of its usual route. This year ‘they’ claim that the jet stream has got ‘stuck’ way too far south causing low pressure systems to form thereby causing all the rain and subsequent flooding.

In fact, this is the worst Summer I can remember throughout my life………..

However, (and there is always a large ‘however’), things can always be worse. It could just as easily be like 1816 – also known as Eighteen hundred and froze to death – a summer that changed the world in more ways than one.

In any event, the major effects were felt in the northern hemisphere, in particular Northern Europe, the American Northeast and Eastern Canada. It was a major disaster throughout these areas. The temperatures for summer in these areas are generally stable with the average being between 68 – 77F. They rarely fall below 41F. and summer snow is seldom if ever seen.

The first signs of what was to come came in May 1816 when severe frost killed off most of the crops that had been planted. In June two major snowstorms hit eastern Canada and New England which caused numerous deaths. More crops, which had survived the earlier frosts, now succumbed and died. This caused localised famine from which many died. Those who were weakened by hunger quickly fell to various diseases adding to the death list.

In July and August, lake and river ice was seen as far south as Pennsylvania. However, within the same period temperatures would be normal or above average one minute and within hours plummet to near freezing. Some farmers in the south area of New England managed to harvest some crops, in particular maize and other grain, but the prices rocketed. The cost of oats jumped from 12 cents a bushel the previous year to 92 cents – an eightfold increase. This would be the equivalent of petrol at $3 a gallon jumping to $24 inside twelve months.

I can hear someone saying ‘so what?’ Well the point is, there were no cars in 1816 and the main mode of transport was by horse. They were also used for all the heavy farm work. Horses need ‘fuel’ and the ‘fuel’ was oats. Most of the roads were in poor condition or non-existent, which caused more problems. Food and feed could not be transported from an area of plenty to those in severe distress.

In Europe, the problem was even greater. The Napoleonic Wars had just ended and even without the ‘new’ problems, food was short. There were food riots in France and Britain with grain stores being looted. On the continent huge storms raged causing abnormal rainfall and flooding of the major rivers. Frost began to settle in August. Thousands died as a result.

Hungary and Italy experienced ‘brown’ or ‘red’ snow, which provides modern scientists with the root cause of the problem. There were amazing colourful sunsets from the same cause. In fact, in some of Turner’s famous seascape paintings, the colourful misty yellow tinge impression that can be seen is also attributed to ‘volcanic ash’.

There had been two large volcano eruptions the previous years. In 1812 on Saint Vincent in the Caribbean and in 1814 in the Philippines. These played a major role when between 5th April and 15th April 1815 further eruptions on Mount Tambora in the now Indonesia, ejected enormous amounts of dust into the upper atmosphere. This volcanic ash circulated around the globe preventing sunlight passing through the atmosphere and thereby lowering temperatures.

The summer of 1816 caused much panic on the eastern side of America and Canada. News that the western regions were more or less unaffected caused an exodus of tens of thousands who struck out for the better growing conditions of the Upper Midwest, then known as the Northwest Territory.

Because of the weakness shown in the lack of horse-feed and the impassable road conditions, other means of transport were being experimented with. There is little doubt that the German, Karl Drais invented the first type of bicycle at this time. This led to further and better means of transport, which would eventually end up with the motor engine and its associated benefits. After all, ‘Necessity is the Mother of Invention’.

Finally, can I suggest that we all keep our fingers crossed that the weather soon improves – I doubt if I could continue with what we are now having.

Incidentally, the Water Authorities lifted their Drought Order in late June……..the only problem being, who needs a hosepipe whilst it is raining so hard?

Mike- In fact, this is the worst Summer I can remember throughout my life….

Eminent Domain to the Rescue, or Not So Much?