In many homeless forums I’m noticing a general apathy among the active homeless — a sort of contentment or lack of interest about changing their housing situation. 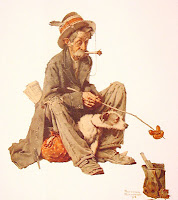 In a post from the GREAT CAMPFIRE FORUM  a man expresses his dreams of homelessness and freedom:

“I’ve often thought of doing just that, livin’ off the land, hangin’ out with fuzzy woodland…”
Good Fortune and Bad Decisions

Acceptance and adaption seem to be changing the perception of many who are living homeless today; at least, if I am to accept much of what is said in the homeless forums.

But, one wonders if these forums actually represent the mainstream of today’s homeless population. Or, do they represent a class within a class? Certainly, in the homeless communities dotting the landscape of America, we have developed several social classes within the homeless community. One can observe this simply by spending one night in a shelter and watching the variety of residents.

Among them, one can witness the following:

These are people who exist in the homeless shelters across America because they lack the training or skills to meet the requirements for jobs that pay a living wage. They generally work in entry level or minimum wage positions with very little opportunity for advancement. Many of them will tell you that they have never collected a government benefit in their lives; and in many cases, it is this sense of “pride” that has kept them exactly where they are…struggling for very little.

Certainly, there are a number homeless college students across America. Many live in transitional housing; out of their cars; or even couch surfing their way between many the sofas of the many friends they easily pick up.

They spend less time worrying about finding a way to survive, than getting their education. For the most part, these homeless kids aren’t exactly the types that come to terms with their station in life. Their needs are still very material and they see hope in the future, once they graduate. They may be homeless, but they still have the latest technology in cell phones, computer games, and other technology.

America’s construction workers, plumbers, electricians and many other fields have been without work since the foreclosure crisis halted the sale of homes. They are now displaced. Many have experienced this in mid life, aging into their sixties now, homeless. As a result, many feel let down, lost and with skills no longer in demand; they are stuck hoping for a solution to pull them out of their problem. There are several who have decided to retrain. These heads of families who have lost their jobs and homes, due to the housing bubble.

As the war in Iraq has come to a close; many of our nation’s soldiers have come home shrouded with a number of psychiatric and physical disabilities. Some have turned to substance abuse to deal with the confused feelings they have. Some are merely lost and having an impossible time trying to find their way towards adapting to a normal life, again. They wander through life seeking a way to exist, but suffering from recurring feelings that fight with opportunities for healing. Sometimes, this ends up creating a financial dilemma that brings them to homelessness.

Sadly, there is a nonchalant group of spoiled kids in their twenties and thirties who spend many nights in homeless shelters, often too high to go home after a night of partying. They finance endless parties by not paying rent and staying instead, in shelters, as an alternative.

You can often spot them. They waltz into the shelters with their dreadlocks and booze breath, or glassy eyes; their voices always loud and annoying. They have little regard for others and often pretend they are having more fun in life, than life should allow. Eventually, many of them turn into addicts and remain in the shelter existence.

These are your drunks and druggies. They have burned every bridge they have encountered with their substance abuse. Now, they have now landed on rock bottom. They will either seek help and try to move up from here; or live a life in and out of homelessness, like many do.

Today’s disabled are not always easily detected by simply looking at them. They may be mentally disabled with disorders as undetectable as suffering from post traumatic stress disorder, to as obvious as experiencing a series of ticks and walking the manic depressive shuffle.

They may also be as serious as suffering end stage cancer, going through chemotherapy, and holding onto the last threads of life they have left. They may be temporarily disabled, without insurance and waiting for a surgery that may correct their condition; but knowing that social health services take years to get them to that awaited operation.

And they may be as insane as the old bag lady with sores all over her body, a continual bad hair day from the matted snarls of filth accumulated after months of not bathing. They may be the women that continually scream frustrations to no one in particular; but directed to every man that made their life hell. They may have been rape victims that never got treatment and carry box cutters now to use if any person comes too close. They may be the old lady that stands in the corner of the shelter, raises her skirts, squats, and pisses like a race horse, watching her steaming urine run along the cement as she laughs insanely.

Some are people who have a pattern of making the worst decisions in the world, and do this over and over. They seem to live their lives playing a continual poker game with their well being.

They risk spending rent to buy some meaningless thing they figure they can’t do without at that moment and regretting it later. They plan to collect an outstanding debt from a friend who has no intention of ever paying his obligation, in order to pay the outstanding rent they owe. When they find out they gambled poorly, they end up homeless.

They spend their time in the shelters still making those risky decisions, shirking responsibility for their bad logic. Some are also ex-gang members who have opted to re-enter society as they age into creating families of their own. In addition to this, many ex-convicts are trying to find their place in society at all, and they have been released due to the overcrowding of prisons.

And some people simply have the worst luck in life. They appear to have an omen floating over their head in life. They may have lost a number of relatives to death. They are fabulous employees; but they are laid off during downsizing, over and over, just because they have a trade or skill that falls out of demand. Maybe, they have even suffered a number of house fires, drownings…situations so many horrible that we can’t believe it is happening to THEM again.


I’m not sure if this new adaption to homelessness is simply the naivety of youth speaking out from living a vagabond lifestyle that offers less responsibility and more freedom. Kids in their twenties seem to have affection for flopping in friend’s homes; until they grow up and realize that someone has to pay the bills. And they haven’t lived through the hobo days; so they romanticize that era.

Or, is this is a movement among the homeless to adopt some utopian view of a new society of poor? People creating intentional communities that attempt to create an ideal society revolving around homelessness?

The idea of this bothers me more than the idea that a few students are simply having a good time learning to survive on the streets and imitating the hobos of yesterday.

Because, it means that capitalism might possibly have marginalized the homeless to the point of adapting to less and less. And this could have sad implications.

In essence, it is possible the homeless today are creating a new, leaner lifestyle. They may be following the hobo lives of our historical past, and accepting their situation.

In the article, The American Hobo, by Colin Beesley the hobo is described as follows:

…the hobo remains something of an enigma. For many Americans the word “Hobo” is replete with contrasting and often contradictory images. To some the hobo is a harmless n’er-do-well, for others a sinister vagrant. He is seen as a “reckless, perambulating soldier of fortune” or as a “waste product”, a drunken bum littering the sidewalks in the less salubrious quarters of America’s cities such as Chicago’s Hobohemia. Most certainly these superficial impressions of the hobo are compounded by his invisibility, because for the most part his life is lived beyond the redoubts of the settled society from which he is often alienated and excluded.

What concerns me about that is many of our nation’s hobos were excluded from prevailing societies; and I wonder if today’s homeless, choosing to accept their plight for whatever reasons, will be excluded as well.

For instance, I can see the corporate elite managing voting districts by bankrupting communities and eliminating the voice of today’s unfortunate. And with corporations now having the dubious honor of being “persons,” I wonder if we aren’t giving the elite additional power by marginalizing entire categories of people…namely, poor people; because as “persons” the corporations can now manage their affairs by suing in court.

I wonder what implications this could have on the rest of society.

If capitalism can marginalize a poor man to the point that he accepts the most miserable conditions in life, and grows to feel that living this way is acceptable, then what does the next financial class of people give up? And if this happens, who are the people that stand to gain the most and have even more control?

Today, in contemporary western society, the capitalist mode of economics has presented us with a dilemma. We now have a yearning for material wealth, instead of a model that satisfies our needs with a demand that fulfills our needs. Because of capitalism we are unfulfilled and divided from ourselves and others.

I do know that many of the definitions of Colin about the hobo’s perception of themselves appear to have been adopted by this new breed of homeless proud people:

“The hobo works and wanders the tramp dreams and wanders and the bum drinks and wanders.” Most hobos are unanimous in that they are committed to the work ethic, as Road Hog (1997) a hobo for over forty years insists, “Real hoboes are workers…”

To be sure there are some differences in emphasis, some “worked to be on the road” and others were “on the road to work”. Whatever their motivations they became part of a distinct caste, that of the hobo. Equally important and fundamental to any delineation of the hobo, and an aspect which is seldom included in attempts to define them, is the use of the train.

For the hoboes the train was their primary method of transport as they ranged across the country in search of work. From this most hoboes developed an intimate connection with, and knowledge of, trains and the railroad network.

In today’s economics, what is our latest hobo optimists enamored with?

They certainly aren’t the romantic hobos of the past, who hang out around railroad yards, in rough groups, roasting a day’s meal over a fire. But who are they?

And what will this new breed of homeless bring to the rest of society’s expectations in life and living conditions? 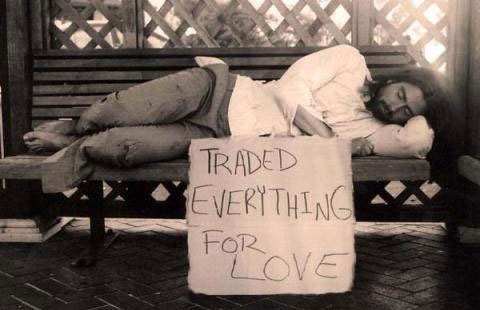 Jennifer Lawson-Zepeda-In many homeless forums I’m noticing a general apathy among the active homeless — a sort of contentment or lack of interest about changing their housing situation.