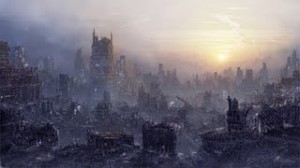 The evangelical freakshow which has become the Republican Party seems poised to anoint either Mitt Romney (my personal choice; perhaps because I really do like whistling past the graveyard and he’s the least mentally-challenged of the lot), or Rick Perry (a fellow who makes G.W. Bush look like Thoreau). Both are followers of a particularly-nasty brand of Christianity – Romney is a Mormon, and believes in things like baptizing dead people and wearing magic underwear; Perry is a Fundie, who believes that renting a whole stadium to pray for rain while getting rid of several thousand firefighters is the best solution for a drought and wildfire problem in his home-state of Texas.

Romney gets at least a point or two for not bringing religion into the general discussion. He has, however, made it pretty clear that he thinks Bush was a genius, and that undoing everything done by Obama is his first priority.

Perry doesn’t get points. At all. His Imaginary Friend is a particularly scary bastard; a guy who founded America, but who wants to destroy it the moment we quit supporting a gang of equally-nasty thugs who are busy pissing-off half the world by way of running the show in Jerusalem; He’s the sort of fellow who’s coming back on a white horse, packing a flamethrower and ready to sort-out anyone who doesn’t believe not only in Him, but in guts, guns and the Republican party.

Meantime, the bow of the Economic Ship of State is well-underwater, and there are some pretty serious signs that the pumps aren’t working at all – we didn’t create Job One in August; first time claims for unemployment were the highest in several months, and leading indicators are pointing to that double-dip recession-with-a-cherry-on-top which I predicted a year ago.

Further, the mayor of New York City, Michael Bloomberg, said in front of the whole world the other day that prolonged unemployment could cause civil unrest (read: riots).

When the bankruptcy rate for college graduates is through the roof, and when PhD’s are standing in line to apply for the few jobs which are available screwing wheels on BMWs in South Carolina for half the pay of their German counterparts, we don’t have a temporary problem in America – we have a problem with our economic structure; the kind of thing which requires government re-regulation to set right, along with the prosecution of those who created the collapse in the first place.

One doesn’t solve these kind of problems by continuing to bring up the strawmen of abortion and same-sex marriage, calling them ‘America’s real moral issues’ – not when the privileged few are worrying about preserving their largesse and discussing where in the world they’ll take this year’s three-month vacation, while there are people dying of bad teeth and starvation. You solve that problem by holding the perpetrators accountable, and setting the circumstances to rights which cause the problem in the first place. Both, however, require a kind of courage which is missing in the Oval Office.

Deep down, Americans know this. Tanning BinLaden’s hide and hanging it from the White House fence as a trophy might have helped a little, but the same problems were here when the party was over. You can only cheer so much for the demise of one man, no matter how evil, when you’ve no job to go to on Monday morning; no paycheck come Friday; no food come Saturday morning.

Going broke slowly is something which even the rank-and-file can see coming – going broke quickly is a conundrum; one of those things which induce good old-fashioned panic. (James Carville said the other day that with two special-elections going the way of the GOP; both in traditionally Democratic territory, it’s time to do just that – time for Obama to use the old Soviet method of firing everyone in sight, putting privates in charge of regiments if that’s what it takes to stop the relentless tides of Republican Panzers from overrunning his political Stalingrad). A kind of panic is now setting its shadow across the land; the kind of uneasy fear that precedes things like revolutions.

You may not be fully aware of this, getting your news from CNN and Fox, but Europe is actually in pretty bad shape. The Euro is rapidly becoming worthless in its home-countries and convertible into very little else; from Great Britain to Greece, European economies are teetering on a precipice named ‘debt’, and none of them have any real solutions. The closest most of us get to the problem is the Dow, which either rises or falls 150+ points each day depending on whether one of the Eurotrash nations is going to default.

Such a catastrophe would certainly carry more than a few American banks with it. This could be the nick in the nation’s fabric which causes the whole thing to unravel; it could be (as I postulated in a piece of alternate-history a while ago) the default of a major state, or something entirely as mundane as a howling mob of a few thousand 99ers deciding to apply a pitchforks-and-rope solution to the mansions and persons of the wealthy in Anytown, America.

America is rapidly becoming ungovernable in any conventional sense; people who are working are just hanging on, terrified of losing their jobs; the unemployed are rapidly losing hope and coming to the realization that they’ve nothing to lose in a nation run by a hapless but well-meaning President who surrounded himself with, instead of men and women of some courage, a thoroughly disappointing gang of cowards, amoral grifters and chickenshit politicians. On the other side of the radio-dial, the Tea Party is nothing but the collective mouthpiece of the plutocrats who are pulling the puppet-strings on everyone from Limbaugh to Bachmann in order to continue turning the United States into the economic equivalent of a 1970’s-era Argentina or Chile, and the socio-religious equivalent of 17th century Salem, Massachusetts.

It may well be that Obama is the last president, at least for a time; maybe forever. Certainly Romney or Perry (or whoever the plutocrats choose to replace him; the last great hope of the common American) will have to face that possibility; that they could be the Romulus Augustulus of the 21st century. The falcon sure as shit can’t hear the falconer, and the center quit holding a hell of a long time ago.

Somewhere, someone is thinking. That person might be a recent college graduate, incapable of finding a job, or an unemployed steelworker, fed up with beans at the homeless-shelter, someone who’s watched one too many children die from a lack of medical care, or a governor of one of America’s more liberal states. Whoever they are, I don’t doubt he or she exists. For one thing, there are too many people just like them everywhere in America – and America is begging for leadership and action.. Just what that action is, what form it takes, and whether our civil liberties are intact on the other side is anyone’s guess.

Absent a random Army general whose name has never surfaced on CNN taking a drive across the river and making an end-run on the Constitution, one of these people is sooner or later going to take action themselves. As I’ve said before: When they start handing out those crisp new brown shirts and armbands, think hard – because it’s a lead-pipe-cinch they won’t tell you the price-tag.

(I’m going to Washington next week to take part in the October2011 protest. More info when I return.)

W.D. Noble- Going broke slowly is something which even the rank-and-file can see coming – going broke quickly is a conundrum; one of those things which induce good old-fashioned panic.

The Dangers of Pacifism