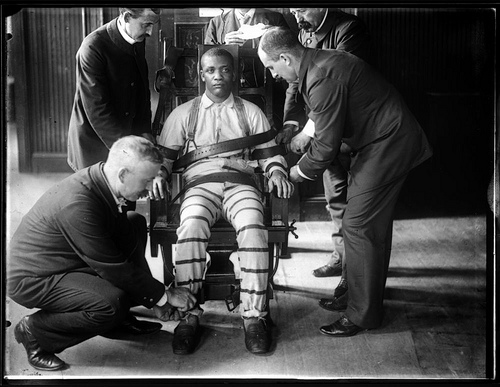 About the author: . Writer, singer, linguist and activist Daniel Patrick Welch lives
and writes in Salem, Massachusetts, with his wife, Julia Nambalirwa-Lugudde. Together
they run The Greenhouse School [ http://www.greenhouseschool.org ]. Translations of
articles are available in over 30 languages.

I used to think that the US was a deeply religious country; so much so that its theocratic fundamentalism distorted every aspect of its crazed political agenda. Well, that last part is still true. But no one could engage in the kind of rampage of sadistic, destructive behavior in which our nation is engaged without the belief that there is no accounting, no consequence–in short, that there is no hell.

When the state of Georgia murdered Troy Davis on Wednesday, it brought condemnation from around the world. This act of state-sanctioned murder also brought into focus the death grip of moral certainty which now has a stranglehold on the US, even in the face of a world which increasingly sees it as morally bankrupt. But a society as thoroughly racist as the US is just as thoroughly determined, perhaps paradoxically–and perhaps not–to deny, ignore and deflect criticism that would raise any doubt, lest the festering sore of its legacy be provoked and proceed to sepsis.

Like a cornered liar or a thief with a guilty conscience, the righteous executioners must continue to see themselves as upholding justice, democracy, human rights–whatever the good guys do–even when, no especially when, their crazed and horrific actions bring disastrous consequences for those around them. It is no surprise, then, that Barack Obama thought it inappropriate to intervene in the Davis case while simultaneously trying vigorously to blunt the effort for Palestinian self-determination (could Hugo Chavez still smell the sulphur?). Nor could he or any in the elitosphere be expected to see the irony of his disinterest in Georgia’s killing a black man while he crowed to the UN about “liberating” Libya, his much vaunted and bombastic rhetoric empty except for the contempt it showed for the Libyan people, the black segment of which is now at the mercy of the rapist racists of the NTC while Obama and his Euromercenary allies glad hand each other and twist the arm of any who dare disagree.

This sort of irony just can’t be scripted. Or, as Bart Simpson once famously said, “the ironing is delicious.” But irony is apparently dead, as the banksters, swindlers, liars and oligarches who bankrolled Obama’s election to the tune of 700 million dollars know all too well. And boy, did they get their money’s worth. Is it even possible to tailor a more perfect stooge for the job of pressing ahead with the Project for a New American Century and all the other tasks of empire with which the US president must be comfortable in order to keep his job? In the words of Zippy the Pinhead, “is dis a system??”

As in Georgia, there will be no remorse, no self-doubt, no awareness of what the rest of the world sees. Full steam ahead. And why should there be? The Peace Prize bestowed by the dynamite-inventing Nobel family (maybe irony died a lot longer ago than I thought) gave Obama carte blanche to pursue unfettered the dreams of empire, peddling old snake oil in new bottles to a gullible public that foolishly gave him the benefit of the doubt.  Honey, the Chinese intern hopelessly in love with Doonesbury’s Duke, once went to, of all people, Henry Kissinger for some much needed advice. How, she wondered, could she reconcile her country’s revolutionary ideals with the excesses of the Cultural Revolution? Kissinger demurs: “Mao did what he had to do in the face of the Soviet threat. To counter the same threat, I advised Nixon to invade Cambodia,  resulting the deaths of hundreds of thousands of innocent civilians! But you don’t see me moping around….” “Easy for you to say, Professor,” Honey retorts. “You have your Peace Prize to fall back on.” The more things change…

And true to form, leaders given an unearned benefit of the doubt are quick and deep to disappoint by any means necessary, throwing one yet another actual body under the doubt bus whose undercarriage is now clogged with the figurative bodies of Jeremiah Wright, Jesse Jackson and so many others. Naturally, it is just this benefit of the doubt that is denied to Troy Davis and so many like him. In fact, while their oppressors kill, imprison, invade, impoverish and lay waste with impunity and moral certainty, the Troy Davises of the world are punished for not expressing enough self-doubt, lest they be tagged with the most racist of all labels, uppity.

More than anything else, Troy was killed for being uppity, for not playing the game. The system’s final victory over the soul is to force it to submit. Orwell’s Room 101 was designed to do just that, to inflict such psychic pain that Winston Smith would cry ‘Do it to Julia!’ and eventually, of course, to love Big Brother. Troy denied them this victory. The day after the Supreme Court finally decided there was absolutely nothing unsettling about the Davis case, the Georgia Board of Pardons granted clemency to a white man who actually killed someone–admittedly shot him and beat him to death with a paint can. But unlike Davis, who stubbornly held to his uppity claim of innocence, the white fella showed remorse, good,  Christian, tear-jerking, self-reforming remorse. Nothing a parole board loves more; we are after all, aren’t we, as David Duke and Evan Mecham dreamed, a Great White Christian Nation?

Perhaps it is better to have some clarity, to have issues defined in terms so black and white (pun intended–help me out here, people! I’m trying to breathe some life back into this irony thing). A lot of the work is already done for us, as capitalism and empire creak under the enormous weight of their own internal contradictions. The House of Cards is falling, and the guilty are running for the exits, just as they did at the UN in “protest” of Ahmedinejad’s speech. Obama’s presidency is doomed, thank god, and will be little mourned. End It, Don’t Mend it, to paraphrase Senator Yoda aka The Hobbit aka the horrible little man, Joe Lieberman. Maybe we can put aside Progressive Internationalism–what those who claim to be progressives call the imperial killing of Iraqis, Pakistanis, Libyans, and soon, Syrians and Iranians if they have their way–and get back to good old Full Metal Spectrum Jacket Dominance…Syndrome…-itis…or whatever empire’s new label will be. Liberals can still be the useful idiots they are so good at being, but this time on our side instead of in service to empire and full-throttle-us capitalism.

And in the background, we can follow the advice of Troy Davis and the parting words of Joe Hill and Mother Jones–Don’t mourn, organize. Uppity is all we know, and there is no time like the present to push back against the powers who inculcate in us such paralyzing self-doubt while exercising absolutely none as they arrogantly plunder and take everything to which they feel entitled. This is a classic tool of empire, satirized in the old Irish revolutionary standard God Bless England. The kids like it for its catchy nonsense refrain, “Whack fol the diddle and the die do day,” but its true message is in the verses: “When we were savage, fierce and wild/ She came as a mother to her child/ Gently raised us from the slime/ Kept our hands from hellish crime/ And she sent us to heave in her own good time!/ Whack fol the diddle and the die do day.”

As the Third World awakens and sheds this slavelike moniker (we could never really figure out what the hell it meant anyway), it sloughs off the equally belittling skins of the undeveloped, underdeveloped, developing, emerging, and becomes the Global South. The world’s people are increasingly aware–much more so than their US counterparts for sure–of who is on their side and who is not. The Europeans shed crocodile tears over Troy Davis and tut-tut their disapproval of a violent, racist America, while their pilots continue to drop bombs on Libya and wherever the imperial agenda next dictates, bringing the New Democracy of One Person, One Bomb to an African, Arab or Muslim country near you!  Who knows, in the next installment they may be as prolific as in Libya, where their 30,000 bombs killed 60,000 people, or two people per bomb. See, under capitalism, even democracy expands in each fiscal quarter. Whack fol the diddle and the die do day….

Daniel Patrick Welch- Leaders given an unearned benefit of the doubt are quick and deep to disappoint by any means necessary, throwing one yet another actual body under the doubt bus whose undercarriage is now clogged with the figurative bodies