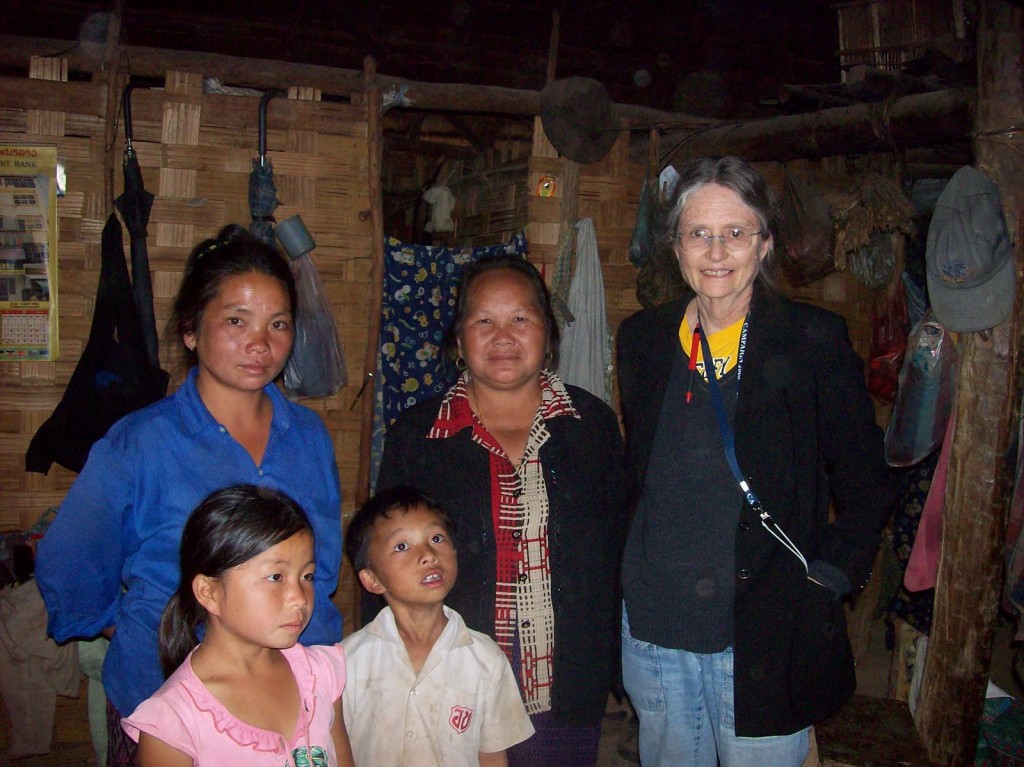 Collectively, most of us Americans seem to be experiencing the same common thread running through our lives right now — we used to have a whole lot of stuff but are now facing a future with not so much.  And almost each of us has a story to tell about his or her own personal loss of stuff.  And almost all of us also have stories to tell about our childhoods, our expectations for when we would become grownups, our reality today and what we think will happen to us in the future.

This week I too went on a quest for my past.  My first stop?  Brad Pitt’s latest movie, “The Tree of Life”.  Pitt’s film could have been based on my own childhood experiences too, back in the 1950s, when we all had a whole lot of stuff (Somalian famine victims would have LOVED to be you and me back in 1953) — but somehow, back then, a lot of us were miserably unhappy as well.

My mother used to sit on a fancy leatherette couch in our spiffy new tract house front room and cry her heart out.  She cried every day for a whole year.  My sister tried to run away from home.  My father lived for the moment when he could walk out our door and go back to his job the next morning.  I was an outcast loner who had no friends at school, even in kindergarten.  And in the midst of all this 1950s prosperity, we all suffered in silence and tormented each other — just like in “The Tree of Life”.

For the next stop on my journey back into the past, I actually went off to visit my old childhood home.  My strict old elementary school had gone all Montessori.  My former neighbors had mostly moved out or died.  All the new residents have remodeled.  No one is a McCarthy Republican any more.  The bowling alley is gone but the ice cream shop is still there (only with new owners and a new name).  I couldn’t see any signs of foreclosures, however, because my former home town is still sort of posh in its own small suburban way. 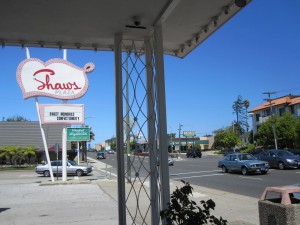 Next I stopped by the big house across the street from where I was raised, met its new owner and told her some of the history of her house.  “This whole housing tract was built for veterans returning from World War II,” I said, “but before that, your big old home used to be the only one for miles around, built by some wealthy gambler in order to live next to Green Hills Country Club so that he could play golf.  Then he died of a heart attack while hitting his ball onto the first green.”  I also heard that the gambler was from Texas, drove a new yellow Cadillac convertible and had ten slot machines installed in his front room.

“Then Col C.W. Jones and his wife Rita moved in.  She used to be an FBI secret agent.”  How exciting that seemed to me, just a bored, awkward and lonely little suburban kid.  “The colonel and his wife served as a haven for all us kids in the neighborhood who had no place else to go.”

After that, I went off to visit my parents’ graves.  Much as I hated my mom growing up, I always visited her grave first.  “Hi, Mom.  How are things going wit’ you up in Heaven?” 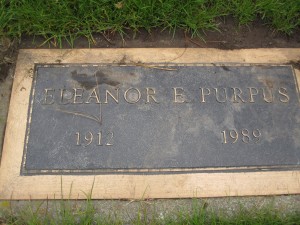 Next to my mother’s grave, workers had dug out a large pit and lined it with copper in preparation for a funeral later that afternoon.  What?  They think that if they line their grave site with copper, it will keep out the worms?  Not.

And like we all have our own individual pasts, every single one of us Americans also has a future.  What will that be?  Of course we’ll all die in the end, but before that happens, over 300 million different American stories will be lived out.

What I am hoping will happen is that whether it turns out that we are to be well-off and surrounded with stuff in the future or poor and surrounded with little more than cardboard boxes and shopping carts, that on the inside, deep down in our souls, that we will all be living a meaningful life and be relatively content with what we have — just the opposite to what happened to Brad Pitt’s family in “The Tree of Life”.  And also the opposite of what happened to me back in the 1950s. 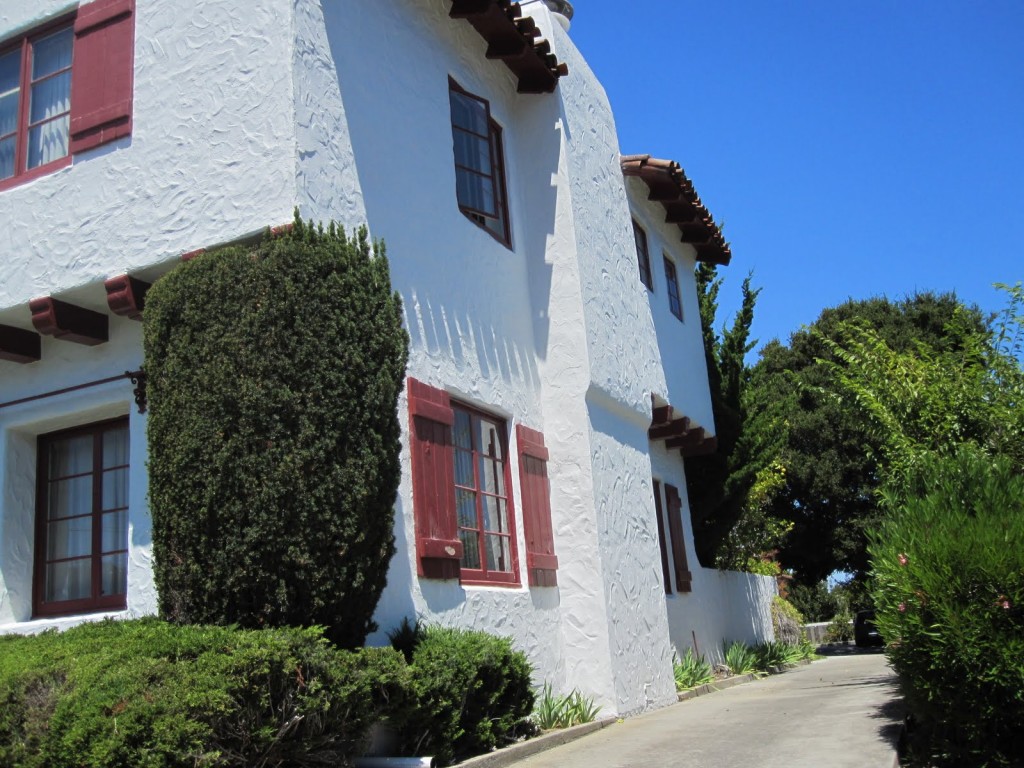 PPS:  The moral of this story?  Americans might consider the benefits of ceasing to live in denial about the future and then actually start preparing to not only survive but to thrive in a future that contains a lot less stuff.  We all seem to be still living in the fantasyland that our whole happy future depends solely on the accumulation of things.  However.  If we continue to think that our entire happiness rests on how much stuff we have, what will happen to us if we start to have less stuff?  We’re screwed.

And another big fantasy that we have is that America’s future happiness is based solely on getting its annual gross national product to grow.  If we think that this fantasy is ever gonna be true in the future — when it was hardly ever even true in the past, then our reality is definitely swimming upstream for sure.

And another moral here might be that Americans need to start becoming much nicer people if we are ever going to survive these coming hard times ahead gracefully.  My country’s current “I’ll do anything for money” attitude has gone on for far too long.  “Lie for money?  Steal for money?  Kill for money?  Sure!”  Are we sick of that yet?  Obviously not.

And the most important moral of all?  We need to start getting rid of the corporatists and oligarchs who got us into our current economic mess and our slavish dependence on stuff in the first place.  Let’s start taking away their “stuff” too.  I personally would love to see how gracefully they can live their lives like the rest of us do — without a billion extra dollars to prop them up.

Their greed has gotten us into our current economic folly — but their greed ain’t gonna get us out.

PPPS:  In mid-September, I am lucky enough to be going off to St. Louis to attend the annual BoucherCon http://bouchercon2011.com/ convention, where mystery writers and fans will honor Colin Cotterill for his excellent (and humorous and exciting) murder mystery series which takes place in Laos in the 1970s.

Laos at the time of the Vietnam war was the most frequently-bombed country in the world — thanks to the warped morality of Henry Kissinger.  And in my new and hopeful American future, I would also love to see Kissinger finally go to jail for dropping 280 million bombs on Laos (yes, that’s .84 tons of explosives dropped per person) — and who is still busy killing and maiming Laotian children even to this day https://legaciesofwar.org/resources/walt-haney-papers/ with his left-over evil and deadly unexploded cluster bombs.  Damn his eyes.

From Constancia: The Jenin Freedom Theater has been invaded twice this summer and members of the cast and crew have been arrested by Israeli occupation forces.  So much for Israel corporatists supporting the arts!  To learn more and/or donate to the theater, please click here: http://www.thefreedomtheatre.org/ 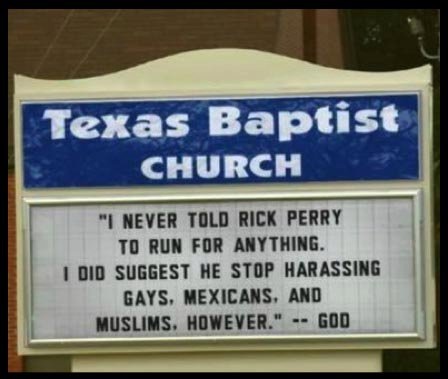 From Steve:  If you miss the way it used to be — then tax a millionaire, support a union, and buy American.

Jane Stillwater- We all seem to be still living in the fantasyland that our whole happy future depends solely on the accumulation of things. However, if we continue