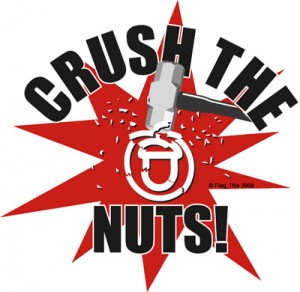 What happens when the “Right” turns out to be right about something?  Recently, television personalities like Glen Beck took credit for breaking stories on ongoing ACORN scandals.  At first it seemed easy to brush it off as another attack on public funded, grant supported programs that help the underprivileged.  These are exactly the kinds of programs the Obama administration is in favor of and trying to set up more of.  They are also similar to programs he has worked for in the past.  Community action agency work being one of the stand-outs in his resume.  Because of this freethinkers everywhere have gotten used to heaving a sigh and going to look for an argument against these pundits so they can continue to spread the gospel of rationality.

However in this instance it turned out the stories were correct and in fact probably there were a lot more skeletons in the closet to be found.

ACORN is a community action agency.  That means it writes grants to provide services deemed necessary in the communities where it is housed.  ACORN having had some good intentions and good grant writers over the years has received quite a lot of federal funding for things like first time homebuyers counseling; tax preparation help; bankruptcy counseling.  Depending on where you live and what state/local grants they received they may have also had programs for housing the homeless; legal advice on things like divorces, restraining orders, child custody cases; Back to work help.

What has occurred of late is a horrible strike to all legitimate Social Service Agencies.  During several investigations both official and “unofficial” as in run by James O’Keefe, (who is semi-well known for his undercover sting of abortion clinics) and posted on YouTube ,  the scum has floated to the top.  And it’s not pretty scum either.

ACORN employees have been videotaped giving advice on how to report illegal prostitution money on your tax report thereby using the federal government to launder your prostitution money.   They recommended using the tax code for artistic performance.  What is so incredibly concerning is they did not do this at one agency in one city but at several different locations in several different states, stand out ones being Maryland, New York, Nevada, California and Massachusetts.  These centers also offered advice on how to help import underaged women from variously named South American countries for the express purpose of putting them to work as prostitutes.  They gave advice on how to deal with immigration and how to make their work look legal.

It doesn’t stop there; ACORN has been ripping off their own agency and shielding the management from finger pointing.  This includes; plundering employee benefits and violating fiduciary responsibilities; refusing to report Dale Rathke’s (brother of ACORN’s founder) embezzlement of $948,607.50 as an excess benefit transaction; Investment fraud; False IRS filing; hiding illegal financial transactions; The list goes on but you can see it for yourself at the congressional report (1)

Because of all this there has been a push to press charges against ACORN federally for Racketeering.  This movement has largely been spearheaded by Sen. David Vitter (R-La.). It has also received a great deal of impressive media back up from right wing agenda based pundits.

Why is this a hot issue?  Besides the obvious,  as you may remember ACORN was accused during the 2008 presidential election of falsely registering people to vote largely in Democrat Barack Obama’s favor.  While this was pooh-poohed as bad apples following the Bush/Cheney chad scandal in Florida, it is beginning to look like there were a lot of dead people voting and folks that voted under names that weren’t theirs.

The Senate Majority Leader Harry Reid (D-Nev.)  dismissed the requests to look into the Prostitution/racketeering allegations.  In his response to requests he stated additional investigations would “Distract lawmakers from addressing more important matters, including healthcare and economic recovery.”   The majority leader also criticized Vitter for “politicizing” the unfolding probe and questioned his larger motives.

“As the U.S. attorney firings and DOJ hiring scandals remind us, we should be very careful about any activities that could be viewed as politicizing investigations and law enforcement decisions,” (The Hill-Tony Romm 9/23/09)

In a surreal feeling twist, Vitter fired back with reference to one of the favorite fiction writers of subversives everywhere pointing to George Orwell.

“It is almost Orwellian for the majority leader and these Senate Democrats to go on and on about how these investigations may be politically driven,” Vitter said, noting that 27 other Republicans signed his letter to Reid. “Anyone who has been following the committee work of these folks since 2007 would see that politically driven committee hearings and investigations are exactly their cup of tea.

“Interestingly, now, because of ACORN’s well-known close relationship with the Democratic Party, the majority leader believes the status quo for the last two and a half years could be harmful to our country,” Vitter added.

Now for my question, what exactly happens when the “Right” as in Right wing nut jobs turn out to be right?

I sat reading as the ongoing reports unfolded stumbling over my own built up prejudice.  I will admit, one of my first thoughts was “Great, now that they have a real story, they are going to do ever more damage to important things like Health Care.”   I don’t think that’s too far off base, it’s going to be easy and almost not even an argument to the average Joe to point at ACORN and ask if this is what federally funded health care agencies are going to be like.  Never mind that at the first wind of this the IRS pulled its tax program from ACORN and President Obama called for a complete investigation.

I worry that the mishandling of real newsworthy news such as this leaves people feeling like Pundits are telling the truth, especially if they “broke” the story which is what Glen Beck is claiming, never mind he doesn’t do any investigative journalism, that’s what his staff is for.  Never mind that his staff did nothing more then find and run a YouTube video that. James O’Keefe conducted and posted.  My thoughts run to people trusting everything these people say, putting bible-like status on their words.  These guys are raising a religion, and doesn’t the bible itself warn of “false prophets” and those who would give just enough truth to keep you on the path to hell?

Another question that quickly followed my first one though was: Is it okay for the “Right” to be right sometimes?

Regarding this question I had to personally concede it was okay.  What’s truth is truth.  Maybe the best way to deal with something like this is to say something along the lines of “You were right about that.” And move along to another issue.  This is a skill long employed by great arguers everywhere.  It’s good to concede when you are wrong and move an opponent to an issue that maybe they know less about.  Asking them to use their “obvious” skill to uncover the truth about something else often has the effect of one of two things. 1. Confusing them to the point that they shut up.  2.  Encouraging them to move in the direction of finding out more truth.

The latter is really the important goal; Getting them to want to know more, real truth.  Wouldn’t it be a good thing if all a sudden they became addicted to being right in fact and not just in their minds?  If handled right, these pundits could be the driving force for change.

And if change really happened in a true and positive way, I would even let Glen Beck take credit for it.  After all, he would finally be right in his head and for real.

(1)For More on ACORN investigation see the congressional report HERE