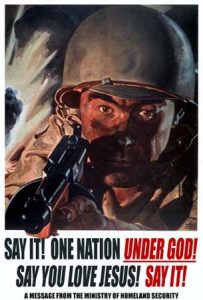 “In legio recubo auctorita est” – an old Roman saying, and a bit of gallows-humor; toward the end of the empire, thinking Romans saw that the legions, far from being a loyal part of the governmental structure, had morphed into a power of their own – insular; bound to separate loyalties and increasingly separated from and disdainful of the civilians they were ostensibly sworn to protect.

The notion of ’empire’ had decayed to the simple understanding that if a legion could be deployed to protect a piece of ground, that ground was Rome. Everything else was ‘barbarian’. Often, the legions were feared more than the barbarians in remote provinces – in fact, large landowners simply employed barbarian levies to protect them – sometimes from the legions themselves. These large estates on the frontier became so self-sufficient that they turned away Roman tax collectors – and became the foundation for feudal Europe in the dark and middle ages.

While I’m sure some of you already know where this is going, I’d be remiss if I didn’t include some recent history, as well.

In the early ’70’s, the United States made the fundamental decision to turn from a conscript-army to a volunteer force. What our leaders forgot – if they ever knew – was this: Volunteer forces carry within them a sickness of sorts – they are almost always drawn from working class conservative society, and as such do not reflect society as a whole. Nations which practice this process eliminate the stress of conscription (never popular), but they also run the risk of creating a military which lacks the values of the society as a whole.

This has never been so evident than it is today.

Evangelism and Fundamentalism – With An M-16 On Top…

Jeff Sharlet, a correspondent for Harper’s Magazine, puts it very well: “When Barack Obama moved into the Oval Office in January, he inherited a military not just drained by a two-front war overseas but fighting a third battle on the home front, a subtle civil war over its own soul. On one side are the majority of military personnel, professionals who regardless of their faith or lack thereof simply want to get their jobs done; on the other is a small but powerful movement of Christian soldiers concentrated in the officer corps.”

He tells a story of a group of soldiers in Iraq, who spray-painted “Jesus Killed Mohammad” on the side of their BFV (Bradley Fighting Vehicle); of a U.S.A.F. Major General (the commandant of the Air Force Academy), who made the National Day of Prayer services at the academy exclusively Christian, and who openly tells evangelical cadets to ‘share the gospel’. 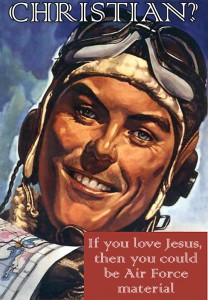 That all this flies in the face of both the UCMJ (that’s the Uniform Code of Military Justice) and the U.S. Constitution should go without saying – that the military is not only left alone with these actions, but encouraged to do anything which ‘improves morale’ should be appalling to anyone with any degree of sense.

The military, up to this point, has operated outside of politics and religion, and with good reason – every nation which has allowed its military to engage in either has invariably wound up with people wearing uniforms running the country. Even the Romans had a law against it; their failure to uphold that law or live to that standard cost them their Republic.

Today, however, we’ve seen the military undergo a transformation – the past twenty years have drawn a generation, home-schooled by Fundamentalist parents – into its ranks; devoid of any real contact with ‘the world’ (defined as ‘anyone outside the Fundamentalist Christian community’) ; these children of the postmodern Christian era have donned their country’s uniform for very different reasons.

They Serve Themselves Who Take The Oath…

To them, it is not an obligation to national service – it’s a chance to prove to their friends, parents and older siblings that they are willing to ‘defend’ the America they were brought up to believe could exist again, under the right circumstances – an America devoid of the corrupting influences which have brought about its decay; an America where ‘God’ was first.

Drawing volunteers from regions which are predominantly rural and with extreme-Conservative Red State values, the current demographics are shocking when examined in the light of day.

While over 80% are self-identified as ‘Christian’, over 30% of America’s military self-identifies as ‘Fundamentalist Evangelical’. Muslims are one in four hundred. Jews are scarcer still, and at the bottom are the list are atheist/agnostic, at less than one half of one percent.

This was recently brought home to me in a conversation with someone online. He served in the U.S. Marine Corps, with two tours in Iraq. I was asking him what he thought of the war. He was in favor of it – and thought that destroying Islam would be a good idea ‘while we were at it’. 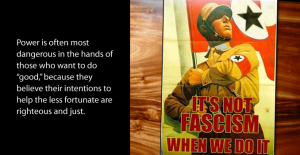 I expressed horror at that idea – and he replied, “I didn’t put on the uniform for you. I put it on for me, and mine.”

It was very evident to me who ‘his’ people were – fellow Fundamentalist Evangelicals.

The U.S. Constitution – An Inconvenient Truth…

This attitude is reflected in the highest levels of the American military. The Officer’s Christian Fellowship (founded during WWII and concerned primarily with the spiritual well-being of military officers for several decades), recently stated that “…if Satan cannot succeed with threats from the outside, he will seek to destroy from within.” Today, the OCF views its mission as a twofold-objective: Bringing America ‘back to God’ – beginning with ensuring that the military is first converted, and converted to a Fundamentalist form of Christianity. 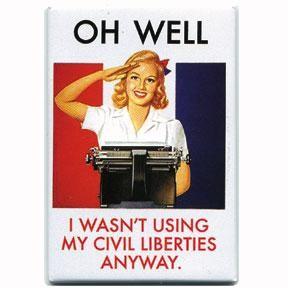 Most believe that the notion of ‘separation of church and state’ doesn’t exist – and the senior officers are using America’s military academies as a means of spreading that gospel-of-a-revisionist-Constitution. Little mention of the First Amendment is made there – in fact, many senior officers either plead ignorance or confusion when the twin-concepts of the Establishment Clause and the Free Exercise Clause are mentioned in conversation.

For the “God Soldiers”, a constitutional republic isn’t enough. They want a theocracy.

There’s a malevolent side to this – far beyond the idea of an insular military which increasingly views Civilian America as The Enemy.

With the advent of the War on Terror, a segment of society which embraces Christianity and which dislikes Islam has found a new home – wearing the uniform of one of the four branches of the U.S. armed forces.

Recruiters have found that Aryans, neo-Nazis and other extremists are fertile ground for recruiting, even though the official stance is that these people are not suitable candidates. The military doesn’t escalate many investigations beyond the unit commander’s level – oftentimes a late-twentysomething captain whose biggest concern is maintaining a full complement of personnel, not worrying about the content of the individual’s character.

The increase in extremists in the military has shown up in places like Baghdad and Kabul, where Aryan Nations and anti-Arab/anti-Muslim graffiti have sprouted like mushrooms after a spring rain. Dealing with the problem is nearly impossible, with troop-strength the main concern. Militia movements are gaining ground in America for the first time since the ’90’s; steeped in the ‘God/guts/guns’ philosophy of the extreme right, they’ve drawn most of their new members from former American military personnel.

America is now in a dangerous position. Our military is now more aligned with extremist elements than with the majority of the country. Half the nation engages in outright-worship of the American Soldier; in fact, stating that you have reservations about the current conflicts in which we are engaged will garner you names – like ‘Obama-lover’, ‘libtard’, ‘socialist’, or worse. In my own case, I’ve been ‘asked’ – albeit politely – if I wouldn’t be happier living in another country, where the ‘belief-system more closely reflected my own.’

This sort of exclusionary-thinking is common to extremists of all stripes – it’s the sort of thing which sent people to camps and gas-chambers by the millions in Europe about seventy years ago, and that sort of thinking has taken root here in America – because, as they’re quick to point out – it’s not bad when we do it, and when ‘God’ tells us it’s all right. 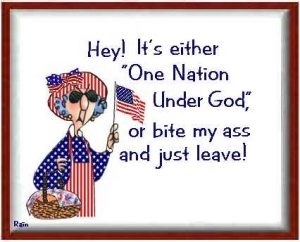 The economy is circling the drain, and shows no real signs of stopping. The next 15 months are going to tell the tale; we’ll either fix it or we’ll have civil unrest like we haven’t seen since the American Civil War.

The military will then be in a position to take center-stage. They’re convinced that America has ‘strayed’ – and that it needs to be ‘taken back’, ostensibly to a time when everyone was a Christian, and where ‘Christian values’ were the standard by which America operated.

Their handmaidens, the half of America’s civilians which offer them adulation and worship, are all too willing to allow troops in the streets, if they’ll ‘restore America to greatness.’ That this has massive implications for the future of America and the rest of the world also goes without saying.

“A soldier without discipline is but a brigand,” said Marcus Aurelius. In the legions, lie the power.

The Crusade for a Christian Military (Jeff Sharlet; Harper’s Magazine – May; 2009)

By Astra Navigo An Insular Military… “In legio recubo auctorita est” – an old Roman saying, and a bit of gallows-humor; toward the end of the empire, thinking Romans saw that the legions, far from being a loyal part of the governmental structure, had morphed into a power of their own – insular; bound to…