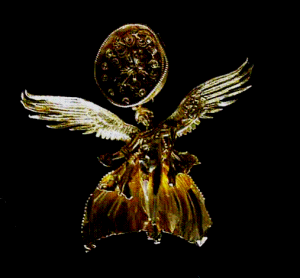 We welcome guest contributor Bill the Butcher.  Bill the Butcher is a thoughtful meat-packer, just be careful what cuts of meat you pick up from Bill as his ideas usually come to him on the job.  Also it’s probably safe to say he’s not your go-to for kosher meats.

Let’s do a thought experiment. You can actually do it if you wish; all it requires is a coin. Or you can just think about it. Either way’s fine.

Suppose I take that coin I mentioned, and I flip it into the air. Now, I can have “’faith” that the coin will come down again. So long as I remain on this planet or on any other planet, asteroid or satellite with a mass great enough to have a gravitational pull larger than the force with which I flip that coin, my “faith” will be justified every time: the coin will, indeed, fall.

Now, obviously, my “faith” in the coin’s falling is based on something: that something is the knowledge, which is verifiable and subject to testing, that every object that has mass attracts every other body with a force that decreases by a square of the distance between them. I know that my coin will therefore be attracted to the earth and, being much smaller than the earth, will “fall” to it. I can have absolute and total faith in this, and, as I said, so long as I remain on this planet, that faith can never fail.

On the other hand, suppose now I have “faith” that invisible winged angels are flying around everywhere and one of their duties is to grab flipped coins and push them forcibly down to the ground. I have total “faith” in it. I believe this with all my heart and soul; therefore I can invent rituals to appease these angels because otherwise they might refuse to push the coins down to earth, and the coins will then go flying upwards forever, making a sort of interplanetary blizzard of perambulating metal currency. My rituals, shall we say, involve the sacrifice of a live black rooster every week to those angels and smearing an altar with its blood. I can claim, with absolute and complete sincerity, that my faith is based on firm foundations: after all, the coins are still falling to earth, aren’t they?

The latter example, incidentally, isn’t altogether facetious; in India, millions of Hindus bathe and fast during solar eclipses, and others bang drums and so on, to frighten away the demon which swallows up the sun. Their faith is firm because the demon has released the sun every time, hasn’t it?

Now, obviously, if one proceeds with even the slightest claim to being a rational being, faith can only mean something if it has a foundation in fact; but whether that fact itself has any logical basis is something else. As we all know, there are facts and “facts”. For the purpose of this discussion, “facts” will mean “statements supported by empirical evidence.” The claims of religious books/leaders/seers/shamans and so on will not come under the heading of “facts”, though they can serve as a basis for faith if one believes what they say. All right so far?

Let’s do another thought experiment. Suppose I’m walking along the street and a piece of stone falls out of the sky and lies, red-hot and sizzling, at my feet. I can either assume that rocks circulate through space and occasionally come close enough to this planet to be attracted by its gravitational field, or I can have “faith” that some invisible Deity has sent that stone to me with a message, whatever that message is. If I choose the latter belief, even if you then come to me with absolute, incontrovertible proof that there are rocks circulating through space that may be attracted by the planet’s gravitational pull, I shall more likely than not stick to my “faith”. Because my “faith” is so “strong”, I may declare that it doesn’t matter a damn what the facts are, faith is above facts. This is, indeed, the most common response of religious individuals when challenged. It’s also one reason why so many non-religious individuals hold the religious in contempt.

Faith, in this context, therefore, is based on assumption. That assumption, if not based on verifiable fact, is essentially hollow and therefore the faith is also hollow. Because the faith-full (not faithful, which has other meanings and I wouldn’t want to confuse anyone) person is subconsciously aware of the fact that unverified assumptions are liable to turn out false, he or she is likely to aggressively refuse to submit his or her faith to scrutiny. In order to distinguish such “faith” from the kind of faith which is based on verifiable evidence, it should be called Blind Faith, or BF for short.

The great thing about BF, of course, is that if it doesn’t work out you can simply say that the faith wasn’t strong enough. Remember that coin we tossed? While your faith in winged angels means you always win when you announce it will fall to earth, it doesn’t help you when it comes to deciding whether the coin will come up heads or tails. But remember your coin angels? If you have faith that praying to those angels will make them turn the coin over each time, every time, to come up heads, and still the coin comes up tails, you can just say that your faith wasn’t strong enough. Jesus knew all about that; remember how he said that if one’s faith was as big as a mustard seed, one could tell a mountain, come here, and it would come. Naturally he didn’t try to demonstrate; but if one of his disciples had tried the feat, he’d have, of course, failed. Then all that would be required was to claim that the disciple’s faith wasn’t strong enough. Nice, huh?

The problem with BF, of course, is that it kills logic, and therefore can be extremely dangerous. For instance, suppose you have faith that your deity will protect you if you go down into the lion’s enclosure in the zoo. You try it and the lion makes a meal of you. In that case it makes not a tooth mark’s worth of difference whether your faith wasn’t great enough or whether it was based on faulty premises. You’re still dead as dead. And of course mass BF, as in the case of crusades or jihad, is infinitely more dangerous still.

I think I’ll stick to thinking things out.

By: Bill The Butcher
What brings tossed coins to the ground, Gravity or Coin Angels? Bill the Butcher has designed an object lesson to find out.