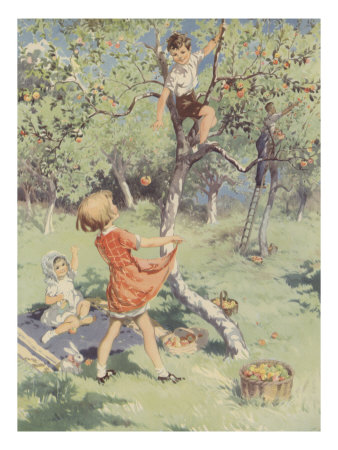 Back in my college days I was taking an off the maps hike with a friend of mine in upper Bidwell Park, Chico, CA.  Okay, it’s probably on a map somewhere, but we had crossed the creek at the end of the obvious trail and were kinda following the water, taking detours around obstructions, etc.  We were about two hours in when we came upon a grassy acre or so with very old abandoned apple trees.  I’m not an arborist but even I could see these trees were easily over 100 years old.  It was kinda of sad this small orchard sitting abandoned in an area left to go wild.  At the same time it was incredibly encouraging.  Not that the dried up apples hanging from the trees would have been good, those would have been awful had we tried them, but the thought that this was at sometime cultivated, then left and the apple trees, they lived on.  Obviously we have the right types of soil and weather conditions to support them all on their own.

Then, several years later, when I moved to the mountain community of Cohasset about 15 miles outside of Chico, CA, one of the first housewarming gifts I received were a pair of cherry trees that had been taken from a mother tree that a family friend had grown there for probably 20 years.

While helping us plant them we were told about the amazing apple orchards that once supported the now small community.  According to a thesis posted on the Cohasset Community website:  “It was learned that the combination of the elevation and suitable soil conditions produced an excellent quality of crisp apples that encouraged rapid expansion; many apple orchards, some relatively large, were planted to the exception of other fruit.

“Samples of Cohasset apples submitted to the 1904 St. Louis Universal Exposition (April 30 to December 1) won the silver medal for Thomas H. Benton Polk and the bronze medal for Augustus B. Hartt of Cohasset, the latter for his Stamen Winesap variety.  Mr. Polk purchased his property in the 1870s and built a farm on Vilas Road. Although his orchard has been completely neglected, remnants of it can yet be seen despite the unrestrained growth of brush and trees around the original fruit trees. In the spring time the blossoming of the apple trees make them distinctive from the others. Polk’s barn became noted locally as the home of many barn swallows; these birds returned to it each year as faithfully as those of Mission San Juan Capistrano.”

He also entered his apples at an exhibition in Watsonville, California in 1911 Dix entered sixteen varieties and won thirteen gold medals, thereby attaining for Butte County the best record for high quality apples of any county in the state.

“Soon thereafter apples were the main produce of the mountain community and the fruit was principally marketed in the valley communities with a large percentage being sold in Chico. The Wells Fargo Company developed a brisk two-way trade with Mexico, exchanging Cohasset apples for Mexican oranges and tangerines which had a ready market in Northern California.”

There are almost no signs beyond struggling left behind trees of this apple boom, although the conditions for growing have not changed.

The reason for the end of apple farming was cheaper apples being brought to stores from out of state.  So it was with a bit of sadness and commiseration that I read about the same thing happening currently in Sonoma County.

Sonoma County, in its apple growing heyday supported more than 13,000 acres of apple orchard.  The groves consisted of scores of varieties and supported hundreds of farmers.  (Source: http://www.smithsonianmag.com/people-places/Californias-Disappearing-Apple-Orchards.html)

But one by one, Sonoma County’s apple farmers are giving up. Though apples are the nation’s most popular fruit, they are relatively worthless in Sonoma County, where wine grapes draw more than ten times the price per ton and where imported apples on local market shelves are often cheaper than locally grown ones. Today, fewer than 3,000 acres of apple trees remain countywide, and just one processing and packing plant is still in business.

Now, some farmers aren’t even bothering to harvest with apples fetching less than 6 cents a pound.  It isn’t worth their while. Today, Chinese apples outnumber American apples seven to one and in 2010 amounted to 36 million tons–roughly half of all apples grown on earth. The reason for this is, of course, cost.  Some come less than 2 cents a pound, according to a 2010 U.S. Department of Agriculture report.

The remaining apple orchards are thinking of things like selling out, changing to another crop (like grapes), etc.  But what would be lost without these orchards?

Diversity is what would be lost. Sure wine grapes are great and a whole industry of bed and breakfasts; high end restaurants, etc have sprung up around the “wine country” of Sonoma County.  Heck, even Washington State, famous for its apples is beginning to get into the wine growing craze.

Besides which, there is nothing that is grown anywhere in the world that tastes as good as something plucked fresh from a tree and sold directly to you.  Or eaten as you pick it, as the case may be.

Sure, apples from other places may be cheaper and we all want cheaper, but what about the loss of nutrients as they are picked early and shipped long distances?  What about the flavor and general lack of variety that occurs when stores buy just for cost effectiveness?

Another ridge over from the lost orchards of Cohasset is Noble Orchards in Paradise, CA.  It is the last working orchard on that ridge and it boasts seventeen varieties of apples.  Seventeen!  Have you ever seen more than four varieties in a store in your life?

Not likely.  And considering the fact that there are somewhere in the neighborhood of 7500 varieties grown worldwide that is just a sad, sad thing.   But here’s a list of about 80 and what they taste like: http://www.pickyourown.org/apples.htm

Most of these are never going to be available in the stores because they just don’t make the trip well, so losing orchards means losing apples, maybe forever.

Which would be sad, because if the old saying “An apple a day, keeps the doctor away.” is true, I do not want to have to eat the same red delicious apple every day.

Grainne Rhuad- Apple Orchards are a vital part of our healthy economy and way of life.

By the Rivers of Babylon: More Netroots Nation reports