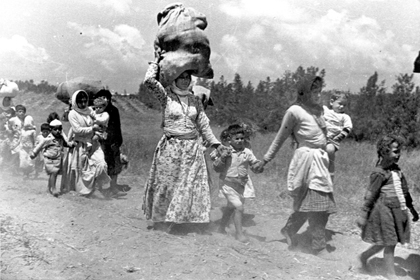 It is now pretty much a matter of record that, after World War II, refugees from Europe landed in Palestine and started a massive terrorist blitzkrieg campaign, massacring thousands of Christians and Muslims in their wake. In a vast display of ethnic cleansing similar to what had previously happened in Europe, approximately 500 local towns were destroyed, 15,000 residents of Palestine were killed and 750,000 more were expelled. Local residents of this area (the ones who actually survived, that is) started referring to this premeditated slaughter as “al Nakba” — The Catastrophe.

And a second “Nakba” is apparently now in the works.

According to University of Chicago political science professor John Mearsheimer, “Given the right circumstances – say a war involving Israel that is accompanied by serious Palestinian unrest – Israeli leaders might conclude that they can expel massive numbers of Palestinians from Greater Israel and depend on the lobby to protect them from international criticism and especially from sanctions. We should not underestimate Israel’s willingness to employ such a horrific strategy if the opportunity presents itself.” http://www.silviacattori.net/article3322.html

Are the land-grabbing neo-cons and faux-Jewish corporatists who now run Israel actually contemplating the instigation of an actual Second Nakba? Holy yikes! Are they seriously actually thinking about starting a second wide-ranging slaughter and ethnic cleansing on the scale of the first Nakba? Perhaps under the cover of a war on Iran? Good grief.

Both strategically and morally, that whole idea sucks eggs.

But then I got an e-mail from a Palestinian friend of mine who lives on the West Bank and he said that his village had just been brutally invaded by a needlessly-large number of highly-armed Israeli neo-con occupation forces.

“During the invasion last night,” wrote my friend, “one of the soldiers stole 1000 Nis (200€) from a moneybox of the youngest brother of my neighbor Mosab. Mosab’s brother had been saving this money for months, little by little from his work as a vegetable farmer and salesman. A laptop was also stolen from the house.

“Throughout the operation the soldiers fired sound grenades, a type of riot control weapon that produces a flash and a loud bang. The sound is sufficient to make the most weathered and well-prepared person flinch in fear and when this weapon is used inside a village at night, it will not only serve to keep people awake but also to bring about memories of past atrocities that the village of Ni’lin has had to live through.

“Many villagers came out of their houses to protest the brutality of the Israeli army and were met with tear gas and more sound bombs. The tear gas was fired straight at civilian houses which caused dozens children to suffer from tear gas inhalation. Live ammunition was also used by the Israeli soldiers as a scare tactic.”

Sure, maybe someday another full-scale blitzkrieg-style Nakba invasion of armed soldiers, settlers and thugs may suddenly descend en mass upon occupied Palestine and expel every single Christian and Muslim Palestinian in “Greater Israel” to the other side of the Jordan River, into Lebanon and Syria, or over into Egypt. And this would be dramatic as hell and make the front pages of all the newspapers. Sure.

But in the meantime, another “Second Nakba” has actually already begun: The Nakba by a Thousand Cuts.

According to Mearsheimer, “There are now about 480,000 settlers in the Occupied Territories and a huge infrastructure of connector and bypass roads… Between 1993 and 2000, Israel confiscated 40,000 acres of Palestinian land, constructed 250 miles of connector and bypass roads, doubled the number of settlers, and built 30 new settlements…. [And since then,] the Israeli prime minister has not only refused to stop building the 2500 housing units that were under construction in the West Bank, but just to make it clear to Obama who was boss, in late June 2009, he authorized the building of 300 new homes in the West Bank. Netanyahu refused to even countenance any limits on settlement building in East Jerusalem, which is supposed to be the capital of a Palestinian state.”

I could write more about this death by a thousand cuts but what good would it do. The Second Nakba has already begun. And nobody seems to care — except for its victims. History is repeating itself here. This is so much like Germany in 1933 when corporatists started establishing prisons-for-profit and nobody cared what happened to the Jews. And it’s also like South Africa in 1962 when corporatists took control of establishing Bantustans and nobody cared what happened to the Blacks.

And will this also be like America in a few more years, after corporatists have also seized absolute power here — and nobody will care what happens to us either?

PS: Here’s another example of a forced population displacement that nobody cared about, one that was overseen by Britain and the United States (not by Nazis), involved 13 million Europeans and cost approximately 500,000 to 2,000,000 lives, including the lives of 7,000 children under the age of five:

According to the Chronicle of Higher Education, “Between 1945 and 1950, Europe witnessed the largest episode of forced migration, and perhaps the single greatest movement of population, in human history. Between 12 million and 14 million German-speaking civilians—the overwhelming majority of whom were women, old people, and children under 16—were forcibly ejected from their places of birth in Czechoslovakia, Hungary, Romania, Yugoslavia, and what are today the western districts of Poland.

“As The New York Times noted in December 1945, the number of people the Allies proposed to transfer in just a few months was about the same as the total number of all the immigrants admitted to the United States since the beginning of the 20th century. They were deposited among the ruins of Allied-occupied Germany to fend for themselves as best they could. The number who died as a result of starvation, disease, beatings, or outright execution is unknown, but conservative estimates suggest that at least 500,000 people lost their lives in the course of the operation.” http://chronicle.com/article/The-European-Atrocity-You/132123/?sid=cr&utm_source=cr&utm_medium=en

Are we having fun yet?

PPS: I was recently thinking about all the wars that America has been in over time, and then started listing them. Let’s see. There’s been America’s various wars on the Middle East, that Korean “police action”, World War I, World War II, the American Civil War, Vietnam, the Central American Wars, the Cold War and also various covert wars where other countries did the fighting but Washington supplied the cash — such as the violent and tragic fall of democratic governments in the Congo and Iran.

But when we consider the Big Picture, did any of these wars ever even make even the slightest difference — other than to make innumerable American citizens poorer and/or deader?

Did any of these wars make any difference at all? Other than to kill approximately one billion people and waste trillions of dollars and destroy untold resources — which we now desperately need? Not really. And nobody had fun during any of them either.

PPPS: I’m arriving in Rome, Italy, on June 28, 2012 — and apparently will be homeless for three days while there (everything reasonable is already booked). So does anyone know if it’s legal to sleep in the St. Peter’s basilica piazza? Or does the Vatican have a no-sitting law too? http://berkeleydailyplanet.com/issue/2012-06-15/article/39862?headline=Berkeley-s-Anti-Sitting-Initiative-br-is-Nothing-But-a-Ruse–By-Becky-O-Malley