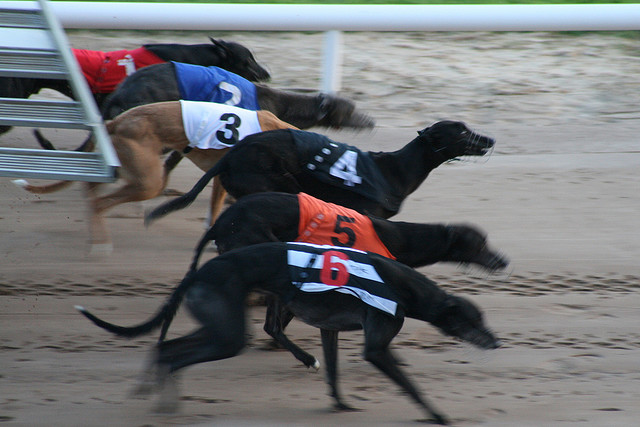 Paddy Murphy was a hard worker at the large Bakery in Dublin. He was fond of his drink but to be honest, he never overdid it. There was probably not a single person in the whole of Ireland that had ever seen him drunk. He also liked a flutter on the horses or once in a while on the dogs, but he had his taste for gambling well and truly under control.

He looked after his family, that is, his wife Maureen and three young children. Young Paddy was now ten years old and the twin girls were now seven. He kept his family well fed, well clothed and healthy. They were a happy and united family and life was good.

On a Wednesday evening, if he had any spare cash, he would sometimes take himself down to the Dog Track at Shelbourne Park. He would have a few small bets and every now and again he would win a few pounds. He never won a lot but then again he never bet a lot either.

This particular Wednesday he and his best friend Jim were having a drink after work in the pub a few doors away from the bakery. He noticed a man whom he had seen several times at the dog track and he was known to be a heavy gambler. He was one of the rare breed who really knew what he was doing and had good inside information.

“Jim”, Paddy said to his friend “do you see your man over there. Well he’s worth a few bob and seems to get great information on the dogs. He must have something good going tonight down at the Shelbourne”. “Be Japers Paddy”, Jim replied “we could do with a nice few bob ourselves, sure the way he is dressed in that suit, he must be well off. It must have cost him a small fortune”. “Wait ‘till you see his big car outside, it’s one of them big German things, a Mercedes I think. It must have cost him all of thirty grand” Paddy sighed then took a swig from his beer. “I bet he never did a good day’s work in his life neither” Jim gave an even bigger sigh.

They both watched the man through the bar mirror for the next few minutes with envy in their eyes. After about fifteen minutes, another man came into the bar and shook hands with the one they were watching. This one looked rather untidy wearing working clothes and a soft peaked cap.

“I bet you Jim that he trains greyhounds” Paddy guessed. “You could be right Pad” Jim replied “and I bet you he has all the inside information”. “If only we could get some of that info Jim, we could make a few bob alright” Paddy replied. Both men this time sighed in unison.

The second man again shook hands with the first and handed him a piece of paper. The first man merely put the paper into his bulging wallet, drank the rest of his beer and left.

Shortly after, Paddy and Jim drank up and made their way to the door. Immediately as they stepped out onto the pavement, Jim tripped on something underfoot. “Are you alright Jim?” Paddy asked a little anxiously. “Ah sure enough Pad” Jim replied “Sure I nearly broke me fecking neck”. They looked down to see what Jim had tripped on and there it was – the bulging wallet that they had seen earlier.

(Now listen, don’t start running ahead of the story and don’t think what I think you are all thinking)…..

Both men were as honest as the day is long and not for one second did either of them think or consider keeping the wallet and its contents. They did nothing more but decided there and then to make their way to the greyhound track and try to find the owner. On the way there, Jim stopped and grabbed Paddy’s arm.

“Don’t even think it Jim or I swear to God I’ll never speak to you again” Paddy said sternly. “No, no, no Paddy” Jim quickly replied “You know me Pad, I wasn’t thinking of his money. I swear it”. “Well” asked Paddy “what were you thinking of then, you had that look in your eyes”.

“Well it’s like this Paddy” Jim spoke softly and slowly. “Now sure it wouldn’t be stealing if we just had a little peep at the note that man gave to him and see if they are the names of a dog or two – sure it wouldn’t be that wrong. Would it Paddy?” he asked.

“I suppose not” Paddy stroked his chin, “not if we put the note back where we found it and gave him his wallet and all”. “Right then Paddy me boy” Jim was at last happy, “let’s have a little look”.

Sure enough, when they opened the wallet they could see loads of money but they did not touch it. They found the note and took it out. All it said was “Rosheen’s Pet”, “Rosheen’s Double” and “Windfield Lily”. “I told you it was tips Paddy” Jim was getting all excited, “write them down and put the note back. We have the best part of half-an-hour to get up to the track”.

Paddy scribbled the names of what were obviously dog’s names on a scrap of paper and put the note back in the wallet. They began to walk rapidly toward the track.

As they entered the cheap entrance who should they see but the owner of the wallet coming out the other gate at the same time. “Hey mister” Paddy called and the man looked towards them. “We found something belonging to you outside the pub” Jim followed up. The man returned and met them inside the gates. Jim handed him the wallet saying “Every penny is there mister, we never took nothing”. The man opened the wallet and had a cursory glance at the contents. He wiped his brow and held out his hand to shake Jim’s.

“Have you any idea how much is there?” the man asked. “No idea at all mister, as I said me and me friend never touched nothing” Jim was basically telling the truth. “Well” said the man “there is nearly seven hundred pounds in that and I thought that was the last I saw of it. You two are the most descent men I have come across in a long time”. With that he took out and counted ten ten pound notes and handed them to Jim.

“For you and your friend with my eternal thanks” the man said. As they shook hands and began to walk away, he shouted after them. “Just a minute if you are staying for the races” he was now speaking softly “I have a sure thing for tonight which should come in at about four to one if you want to put the best part of that money I gave you on it”. He bent over and whispered in Jim’s ear “Windfield Lily in the third race. God bless you lads and thanks a million again”. With that he was gone.

“I don’t know whether to call him a gobshite or not Jim” Paddy said to his friend “I know he gave us a hundred pounds but he could have given us the three dogs’ names instead of just the one”. “You can call him all the gobshites you like Paddy, sure he’ll never know that we have the three, come on, and let’s look up the race card” Jim was happier than Paddy had ever seen him.

(Now sure this story could go on for ages and as the best parts have yet to come, sure I’ll skip a few bits)……..

The first thing is that Windfield Lily did win by a mile at four to one and they had ten pounds each on her. Rosheen’s Double was beaten in a photograph and as they had bet twenty pounds to win, they made nothing on that one.

However, Rosheen’s Pet romped home at six to one and again they had ten pounds each on her. They now had nearly three hundred pounds which they shared and left before the racing was over. They were not going to chance their luck any further – all their luck for the year was all wrapped up on that one night already.

They returned to the bar where they had been earlier and began drinking heavily. Not only were they drinking pints of Guinness but each time they had a large whiskey to go with it. Within a couple of hours they were both stocious drunk.

They staggered out of the pub at closing time and tried to make their way home. Jim was quite bad but Paddy was even worse. It was Jim who turned the key in the door at Paddy’s house and he literally fell into the hallway. Jim might have been drunk but he was still cute enough to get away as quickly as possible before Maureen came down the stairs. As far as Paddy was concerned, he did not have the faintest idea of where he was or what was going on.

The next day he was not working until twelve noon and he awoke at about eight o’clock with the worst hangover he ever had in his life. He looked around the room and there was no sign of Maureen. He sat up in bed and then noticed the cup of tea and two slices of toast on the bedside table. “Be japers” Paddy said aloud and got out of bed. He was wearing a fresh pair of pyjamas. “I don’t remember putting them on” he said aloud. He looked and his clothes were neatly folded on the dressing table. He stood there scratching his head in wonderment.

As he made his way out onto the landing he met his son young Paddy. The boy smiled at him and said “You were as drunk as a sack last night dad but you were lucky?” “Lucky?” replied Paddy, “where’s your ma?” “Oh she said she was running down to the shop to get you some nice rashers and sausages for your breakfast, you are well in her good books alright”. Young Paddy began laughing as he made his way downstairs.

Paddy followed and grabbed young Paddy’s arm. “What in the name of the good Lord is going on Patrick, tell me, what’s going on?” “Well it’s like this Dad” young Paddy began slowly, still with that silly grin on his face. “You fell through the door so drunk that I don’t think you knew who you were or where you were. Ma came down and tried to take your clothes off you to get you to bed. Well you know what dad?” the boy asked. “No son, just tell me?”

“Well when she opened your trousers and tried to take them off you screamed ‘Leave me alone woman, I am a happily married man with the best and most beautiful wife in the world’. I think you passed out then and I helped ma get you to bed”.

As an enormous smile came upon Paddy’s face, young Paddy asked “Tell me dad, were you really drunk or just pretending to be for ma’s sake?”…………………

Mike: “No, no Paddy,” Jim quickly replied. “You know me Pad, I wasn’t even thinking of his money. I swear it.”

Dragons on the Wind

The Curse O’ the Irish