by Bill the Butcher
He is every woman’s worst nightmare. He lurks in the shadows, evil in his heart. He sneaks into houses while the owners are at work, and conceals himself in some niche where nobody looks. There he waits, until everyone has gone to bed, and night’s blanket covers the city with darkness.

Then it is that he emerges from his place of hiding, and makes his way through the sleeping house to the woman’s bedroom. Slowly he eases open the door, and tiptoes across the floor until he is standing by her bedside, looking down at her as she sleeps. And then –

What does he do then, this shape of evil personified, this fiend from the depths of depraved hell? Does he strip the nightclothes from her body and violate her, silencing her cries with a chloroform-soaked rag? Does he decapitate and disembowel her, leaving messages in blood written on the wall for the police to find? Does he merely steal her money and jewels from the bedside drawer? What does he do?

He, well, and I’m actually ashamed to write this: with all that awesome evil to be done, our protagonist doesn’t even attempt to become famous as Jagmohan the Ripper. No, in the true spirit of ahimsa, he eschews all violence, and he apparently has taken vows of poverty and celibacy as well.

The city’s full of rumours these days of the Massage Man, that villain of the darkness who terrorises sleeping women by massaging them. Everyone seems to know someone who knows someone who’s been massaged by this vile criminal; the details are, though, coyly lacking of just how he massages her, which parts of the body, and how long, and why the women seem to submit to his massage long enough toknow it’s a massage (no version of this rumour says he groped these unfortunate women’s boobs and ran – no, he quite indubitablymassages their bodies…somewhere), and to allow him to make a getaway. Also, it would seem that these ladies possibly enjoyed the experience of a soothing massage, which possibly has some memory-altering capacity as well, because none of them has ever come forward to claim that she was massaged. It always happens to somebody else.

That coyness is lacking, though, in the Curious Case of the Three-Headed Cobra. This polycephalic serpent has allegedly been seen by many, many people, sometimes in different parts of the city at once. There’s even one photo of it, published in several of the local papers, depicting the snake (unfortunately, being biologically literate, I have to resist the temptation to write the vile viper), hood raised, in front of a crowd of people.

Unfortunately, there’s another version of the same photo, which shows the snake (which looks to be a King Cobra) as a perfectly normal one; and as for the said crowd, for all the cell-phone pictures they seem to be taking, none of those pictures has apparently been made available for analysis. And where all else fails, there’s hoax slayer, of course. 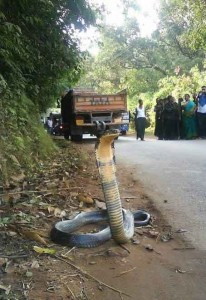 As for the snake itself, nobody has caught it either to research its mysterious ability to be in multiple places at once – it’s even been to Nepal!

Recently, after the local newspaper published a debunking of the snake, a furious female wrote in a de-debunking, questioning the paper’s questioning of the veracity of the people who claim to have seen it. Apparently, though the lady concerned has not herself seen the colubrid, she cannot tolerate the honour of those who claim to have being impugned; and therefore, the snake must have its way.

Never, as someone said, let the facts get in the way of a good story.

Meanwhile, did you know about the appalling danger this planet is in from a mysterious asteroid? Well, this rock from space is rushing towards us through the airless void, even as we speak. Yes, bound by the laws of gravity, this mindless boulder will come within 24000 kilometres of this planet, whereupon it will block out all sunlight. Yes, there will be endless night on this planet, lasting for a year. (And what a pity that this means we’ll miss out on the next occasion Mars suddenly chooses to be the size of the full moon, too!)

Can you imagine the fun the Massage Man will have, with an entire year of night to run his free personalised massage parlour, brought to the ladies of the town in the privacy of their own homes? And how about the three-headed snake, over which people will be stumbling round every corner? The poor thing will be so busy biting left, right and centre that it’s never going to have a chance to get its poison sacs full.

And there are the Phone Numbers Which Makes You Bleed to Death. If you dare call them, you, my friend, have committed suicide, for you will fall to the ground writhing, as your body bleeds from every orifice, until you bleed out and die, leaving only a disgusting sticky mess of congealing blood for everyone else to clean up. So dangerous are these numbers that local telephone booths have allegedly put up warnings on their walls with the numbers mentioned; unfortunately, I have not seen these warnings, or else I’d have called all these one by one on live video and let you all enjoy my bleeding to death. Or not.

This must be the rumour capital of the world. There are plenty of others which are frankly too boring for me even to go into, but there must be people actively creating and propagating them; I suppose it makes them feel good, or complete, or something. Some of them are frankly self-serving rumours, like the “prophet” who predicted a three-hour earthquake a couple of years ago in which all but the true Christians would perish, or the woman who attained temporary notoriety by claiming that England footballer Michael Owen was a relative of hers, and therefore a “son of the soil”. But the rest of them seem to spring from some deeper mental aberration.

In any case, we don’t really need rumours to keep ourselves entertained; the reality is bizarre enough. Only a few days ago, there was the case in which the state legislator for Mawlai constituency, Founder Strong Cajee, was pictured sleeping in the state assembly, right in the middle of a political debate. This photo was run in several of the local newspapers, following which Mr Cajee cornered the photographer concerned – right there in the state assembly – and in the presence of at least three other legislators, proceeded to display how “Strong” he was by beating the man black and blue.

After an outcry led by the local media, Cajee – who was not arrested for assault, of course; why, did you imagine he would be? – claimed that he was merely “defending the honour” of the people of his constituency, since he claimed the photographer had called it the “Mawlai Savage Constituency”. Not surprisingly, nobody but he seemed to have heard these remarks, and the people didn’t buy it either; one person said that Cajee put the “savage” in the name. In any case, he then “apologised” to the reporter, and there the matter rests.

Of course the people are going to vote for him again in next year’s state assembly elections; why, did you think they wouldn’t? Have you even been listening to me?

Now, I’d propose the Massage Man as Cajee’s political opponent, and urge people to vote for him instead.

At least he provides some kind of a service. I think.

Bill the Butcher- He is every woman’s worst nightmare. He lurks in the shadows, evil in his heart. He sneaks into houses while the owners are at work, and conceals himself in some niche where nobody looks…