Editor’s Note:  Dylan has been a frequent visitor to the Subversify forum, giving his dog’s eye view on issues and events, and sometimes even debating with another rather radical dog, Tashi, who encourages Dylan to rise up against humans.  Dylan, however, has no desire to rebel against humans.  He calls dog owners, pack leaders,  their family members, puppies, and views houses as dens, where the pack leaders keep order with the assistance of their faithful dogs.  When he wished that the Subversify staff would write a love note on service dogs, he was encouraged to write his own story.  This is the first of what we hope will be a small series of children’s story, written from a dog’s viewpoint of the world around him.  If you like Dylan, raise your paw.

It was one of those Big Rule days.  The pack leader was taking me for a walk, when she decided to do a little shopping at one of the stores.  As usual, there was a “no dogs allowed” sign in front.  It’s a real cases of species discrimination.  The only store I’m allowed to go into with the pack leader is the pet shop that says it’s dog friendly, but she always hurries me out when I start to leave a message that I was there.  If you ask me, that’s not very friendly when we can’t even leave our calling cards.

That’s a dog’s life for you.  There are always instructions on what you can’t do.  You can’t chase the den cat, even though I don’t know why cats are allowed in dens.  You can’t leave holes in the strawberry patch.  You can’t bury your bones in the couch, and you can’t go into stores, marked “no dogs allowed”.  So I sat down on the sidewalk while she tied my leash to the bicycle rack. There was nothing more I could do except guard her through the window.  That’s what dogs are allowed to do, guard the pack leader and her puppies, even if it means from a distance. 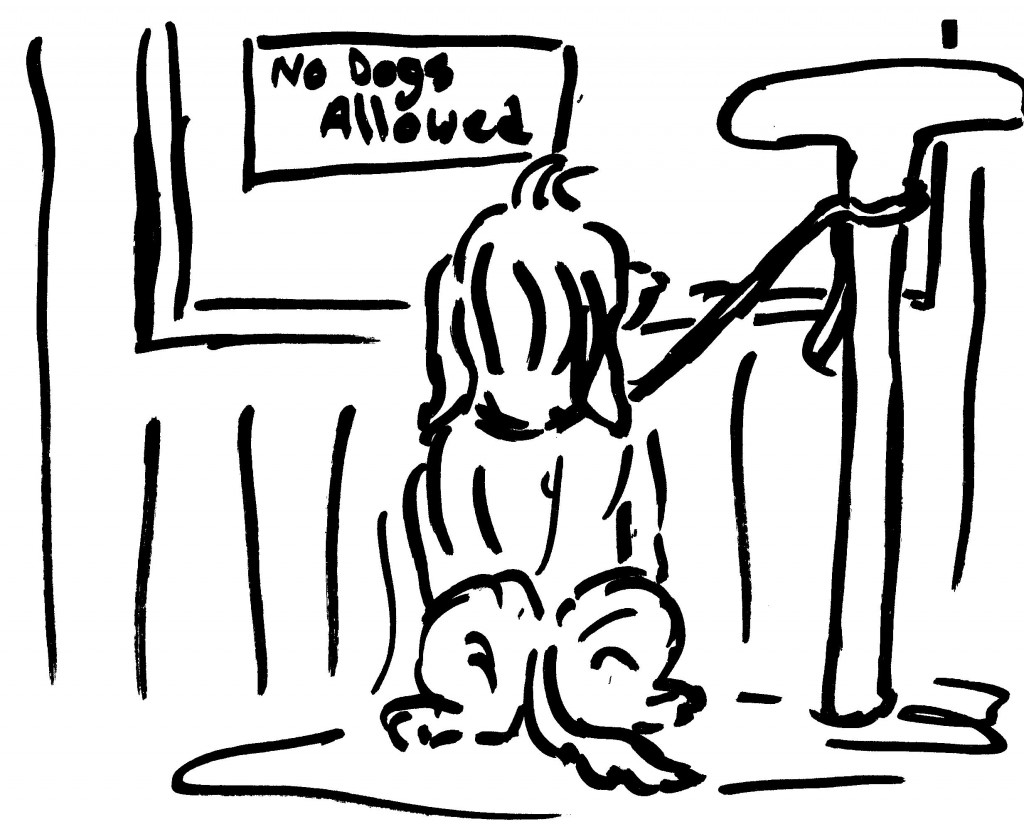 I was watching her closely as she did her shopping, when I suddenly noticed there was another dog in the store.  That seemed pretty unfair.  This dog wasn’t even on a leash, but it was wearing a sporting, bright blue saddle blanket with words that said, “don’t pet me.  I’m working”.  It didn’t seem to be working much.  Mainly it hovered around a pack and kept pushing along a pack leader puppy that didn’t seem to be paying much attention to where the others were going.  When the pack came out of the store, I sniffed at the dog to see why he was so special.  I immediately smelled advanced education.

Banji, I learned, as we got to know each other better, was a service dog.  Service dogs help pack leaders with handicaps.  Some require up to two years of advanced education before they are given to a pack leader, such as dogs who guide the blind or leaders in wheel chairs.  Other dogs only need to go to obedience school.  I told Banji I was a service dog, too, although I didn’t make top grades at obedience school the way he did.  There are some clans I just don’t like and I let them know it, so the pack leader never takes me with her without a leash. She says this is for my own good, but for her own good, I am her ears.   I let her know when cars are coming up behind us, another pack is nearby or if someone is at the door.  She doesn’t hear very well, and sometimes I even have to tell her friends where she is at when she is outside working in her garden.

Banji not only went to obedience school, he’s had special service training.  This training began at a very young age when he was first given to his pack puppy.  It was important to see if the pack puppy would like him before continuing his education.  This pack puppy was very special because she belongs to a special needs clan called Autistic Children.  Autistic Children have a hard time communicating with words, which is alright with us dogs because we don’t often communicate with words, either.  They also have a hard time following instructions and become confused easily, and that’s where we dogs come in handy.  We’re always having to follow instructions, although we don’t always agree with them.

Training meant spending all his time with the Autistic puppy, even when she went to school or on a shopping trip with the rest of the pack.  Banji lets Autistic know when it’s time to join the pack for dinner and guides her when they go out in public so she doesn’t get lost.  Banji says Autistic is very smart but there is something wrong with the way she sees things so it’s hard for her look at others or find her way around.  She also doesn’t have control of some of her body movements, which I understand well.  Sometimes my hind leg 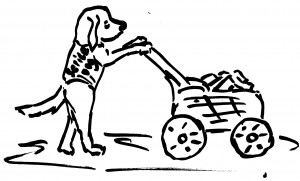 thumps for a good fifteen minutes when I think I feel a flea that isn’t there.

Service dogs come in all kinds of shapes and sizes and fill all kinds of needs, but they most often come from the class of working dogs; shepards, collies, retrievers and rescue dogs because these clans have spent many generations learning to follow the instructions of their pack leaders.  I like my job as a service dog.  It makes me feel important that my pack leader needs me, but I think Banji has one of the most noble jobs of all.  He takes care of a puppy who has been very alone for a long time because nobody understood her, but Banji does.  He leads her, reassures her, protects her, helps her join her community and teaches her what it’s like to have a true friend. 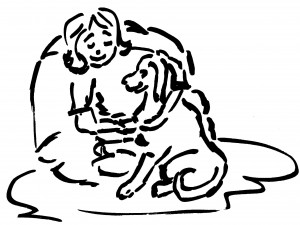 Dylan- Service dogs help their pack leaders in very special ways and Banji, the service dog, was hired as the companion of a very special puppy.

Breaking News: Marines did not desecrate Taliban corpses by urinating on them