There is something the new protests are missing.  It’s humor.  Humor goes a long way to alleviating the both the people involved and the people who have to watch it at home.

Meet the Pie Man.  His real name is Aron Kay.   He has been protesting since the 1960’s when he made a name for himself throwing pies and running.  He has been saying it with pies for longer than some of us have been alive and it’s more than just tomfoolery.  In the words of Aron Kay it’s “Assassination without bullets.”  It’s a sense of public ridicule which dethrones the high and mighty and makes them for just a moment, human.

When one watches a person being pied they should watch for the reaction.  There is the ‘What the Fuck’ moment followed closely by ‘How could this happen to me, ME! I am all powerful.’ Then there is the anger and disgust.  Therein you see how someone really feels about the people they are talking to.  You know in that instant whether they have a deep seated disgust for their audience, constituents or whomever.

If they take it gracefully, tasting to see if it’s a good pie or a crap pie or maybe just a bunch of cool-whip you know, okay they maybe are a bit human.  This behavior is usually followed by a joke.

Most often though people react with anger.  Like Rupert Murdoch whose wife attacked the pie thrower.  This shows undoubtedly that their egos cannot stand a little bit of cream and crust.  They are unmasked for one moment and if people are looking they can see that.

And most recently he got Geraldo Rivera at the Occupy New York protest it wasn’t with a pie, but the Pie Man makes due with white powdered rations, some report were strawberry drink mix in some reports it was milk.  In any case you have to make due when you don’t bring a pie.

Geraldo wasn’t fazed and indeed posed with the Pie Man later; it was more about the Fox news coverage of the event anyway.

I contacted Aron on the outside chance that he would get back to me.  He’s very busy with the Occupy Wall St. movement.  He got right back to me and gave me a few minutes of time on the phone.  This is the thing with the Yippies they want to connect, to help and to share.  He shared stories of Ireland when he found out my name was Celtic.  But more importantly he told me about how his humor and connectivity helps keep people involved.

He talked about hooking up with others he hadn’t seen in years including someone he “recruited” as a 17 year old to the Yippie movement.  His big wish is that he could do a bus tour of all the occupations.  Frankly so do I.  I wish it was cheap enough and easy enough to still travel and do this.  Build morale and visit the different movements that have decidedly different feels.

When asked who he would most like to pie he did not hesitate, it was Glen Beck.  Coming in a close second was Sean Hannity. Both of which I agreed were excellent choices however unlikely they were to come down off of their judgemental seats and visit an actual protest.

He also was quick to point out that humor in areas other than slapstick is present and hopfully growing.  He pointed out Randy Credico who has been active in pointing out the lighter side of the Occupy movement.  He has also recently run for N.Y. Senator on the ideal that a comedian may be the only honest person left. 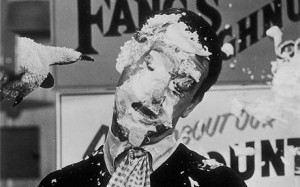 The principle of the pie has long been a vaudevillian standard.  Employed to mostly relay; “this guy/gal needs to be brought down a peg or two.” It took off from there as film became popular as a slapstick standard and who amongst us has not watched the classic Three Stooges’ “In The Sweet Pie and Pie.” or my favorite from Our Gang “Rascals Pie Fight: (If you haven’t, shame on you! Here’s the links: http://youtu.be/tPtVxrQOzpc  http://www.youtube.com/watch?v=p8sYMDHPYsM&feature=related )

Did you know in some states pieing is considered Battery?  Like in Michigan where In August 2010, a Michigan State University student named Ahlam Mohsem, 23, threw a Dutch apple pie into Michigan Senator Carl Levin’s face and was arrested on assault and battery charges. The police also charged a man who allegedly distracted the senator before the pie was thrown. Mohsem said she threw the pie to protest the Senator’s support for war crimes by Israel.

It is also apparently illegal in Canada where several people have gone to jail for pies.  I guess they have absolutely no sense of humor or they prefer pudding.

It’s not that pieing is a dead art at all as many have taken up the torch.  Groups like Al Pieda and The Biotic Baking Brigade have begun sharing and planning pie events.   Mostly though pieing is a lone act.  Which makes it easier to do, there’s not a lot of planning involved and you are almost guaranteed to get your statement on TV.  People will see and talk about a pie in the face.  They will laugh, shake their heads and then talk about whether or not that person deserved it.  And then laugh some more.   It is a simple and perfect thumb of the nose at those getting the pie and the media who would normally never take the time to talk to dissidents much less show them.

Then there’s the bit about it being fun.  Fun is actually what is necessary to keep a movement going.  We can be concerned angry and rebellious but if we never have breaks to smile, laugh and remember there is and should be more, then there is nothing to fight for really.

Some Pietry
Say it with pies, sometimes it’s
hard to find the words.
although we search for hours;
and so, on those occasions,
we might’ say it with flowers
—our tenderer emotions,
by people felt, and possums,
expressed in the universal
language of blossoms.
But how do you respond to
cover-ups and outright lies?
fortunately there is a way
—say it with pies!
Instead of trying to decide
which flower would be more thrilling,
you’re standing there deciding
between a choice of filling;
should it be apple, mincemeat, or
a cream pie?
Here’s your chance to be creative and come up with a dream pie.
Satisfaction’s in the baking, and sheer joy when it flies;
it’s a noble undertaking
—SAY IT WITH PIES

Grainne Rhuad- ‘Nobody move! Or the CEO gets it in the face with cream and dough!’-Chumbawamba:Just Deserts

How to Exorcise Your Movie Set