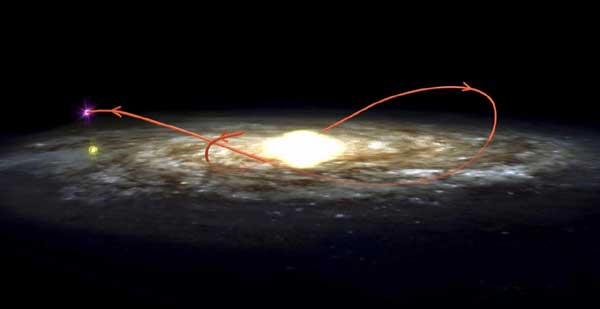 I’ve got a question in my mind today that just won’t go away, and this is it: What is it like inside a black hole?
With apologies to those for whom this is old hat, for those of you who aren’t really into astrophysics, a black hole is an astronomical body which results when a super-massive star (more than three times the mass of our sun) collapses on itself (the reasons for this collapse aren’t relevant to this particular discussion). Since every object in the Universe possessing mass attracts every other object with a constant force (called “gravity”) which increases four times with each halving of the distance between them (the Inverse Square Law, which you might remember from school physics), as the star collapses on itself, the gravity attracting its component parts to each other increases to the square of the amount by which the star shrinks.
For illustration, imagine a ball made of foam rubber, and squeeze it on all sides so that it is crushed on itself. Now imagine that the force that is crushing it isn’t your hand from outside, but an attraction from inside – an attraction which increases steadily the more the ball is crushed. What happens to the ball at the end?
Since the attraction increases steadily, if it keeps increasing, the ball will ultimately collapse to the point where it can collapse no more, until all the spaces in the foam rubber have vanished and the thing is no longer compressible. Yet, the force keeps increasing. Now what?
Well, if you have a large enough star, instead of a foam rubber ball, it will collapse until it no longer exists in the visible universe – it will collapse into a point smaller than the full stop at the end of this sentence – yet it still possesses the entire mass of the original super-massive star. Under those conditions, its density will be so great as to approach infinity, and its gravitational field will be rather large.
How large?
This is where it gets interesting. Gravity is an attractive force, so in order to get away from it you need to move faster than it attracts you. That’s why you need a rocket to go into space, and can’t just fly into orbit on an Airbus. Think of climbing out of a well, and you have the idea. That’s what they call it, actually, the gravity well.


Well, the gravity well of a black hole is so deep that not even light can climb out of it. According to Einstein’s General Theory of Relativity, light is the ultimate limiting factor in the Universe. Nothing – and that means nothing – can move faster than light, whose speed is 300,000 kilometres per second. The speed necessary to climb out of any given gravity well is known as that gravity well’s escape velocity, and the escape velocity of a black hole is greater than the speed of light.In fact, that’s why they call it a black hole.
This, then, is what a black hole consists of: a point of infinite density, known as the singularity, at which the laws of physics might break down; and this is which is surrounded by a region of gravity so intense that light can’t escape from it. This region is known as the event horizon, for reasons I’ll explain in a minute.

Obviously, if not even light can get out of a black hole’s gravity well, nothing else can, either. Therefore, nothing that happens inside the gravity well of a black hole can be detected from outside. No information can leave the gravity well of a black hole, and this is why the event horizon gets its name. We can’t know of any events that happen inside it.
Proceeding along this same line of thought, if anything falls into the black hole, it for all purposes vanishes from the known (and knowable) universe. Once it’s inside the event horizon, not only can it never leave, but no information about it can ever leave, either. It’s the only real, permanent, and indisputable disappearing trick.
Now, the gravity around a black hole is so intense that it sucks in everything, from gas particles to material objects, which approaches close. Take a look at this picture, for example, where the black hole sucks in a stream of hot material from another star, forming an accretion disc: 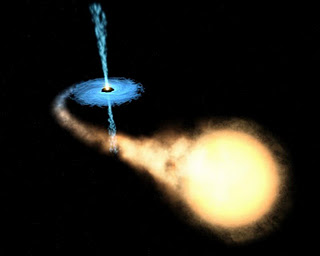 Hollywood movies apart, no astronaut would be advised to try and dive into a black hole. Let’s suppose someone fell into one feet-first. As this intrepid (and suicidal) adventurer fell, the gravity around his feet would be many times greater than the gravity at his head, because his feet are closer to the black hole and the distance between them and his head would mean that the gravity affecting his feet is greater by the square of his height (the Inverse Square Law, again). This is true of all gravity, but most gravitational fields are so weak that it doesn’t matter. However, since the gravity well of a black hole is so strong, the difference in pull along the length of his body would stretch him out like a piece of chewing gum; as he fell into the event horizon, he’d be drawn into something resembling a thread, hundreds of kilometres long.
(I’ll digress a moment to acknowledge that there’s something else predicted by the General Theory of Relativity, and proved in experiments; time moves slower the faster one travels, until it comes to a full stop at the speed of light. Yes, I know that; but for the purpose of this article, where I’m admittedly presenting a simplistic view of a black hole, that’s not relevant.)
Even if our adventurer somehow survived his trip into the black hole, nothing he saw or did there could ever become known to us outside, so we can never actually be cognisant of the conditions inside the event horizon. There might be anything there – including planets, complete with advanced civilisations, according to at least one physicist [source] – but we wouldn’t know.
But for the sake of argument, let’s say you and I managed to survive a trip to the inside of an event horizon. It’s not important that we couldn’t let anyone remaining outside know of what we saw and did, whether we kept spinning round the singularity in some complex orbit or fell into it and were instantly consumed. As long as we remained alive and functioning, what would we see?
This is precisely the question that is haunting me today, and will not go away.
I have a speculation, which I admit is unsupported so far as I am aware by mathematics and physics, and therefore is very likely wrong. But hear me out on it for the moment.
As I said, everything – be it light, radiation, or matter – that enters a black hole stays inside. It can never escape so long as the black hole lasts. Now, light or radiation never disappears, no matter how much time has passed since it was created. If it’s not absorbed, it only gets dissipated by a square of the distance it travels, again according to the Inverse Square Law. That’s why we can still detect the background radiation left over from the Big Bang which created the Universe.
But within the black hole, the light and radiation could go nowhere. It could only bounce back and forth, endlessly, inside the bubble of the event horizon, without dissipating. And as the black hole accumulated more and more radiation and light, the interior would necessarily get brighter and brighter. As long as the black hole lasted, therefore, the interior would keep gathering energy, which it could not lose. (It’s perfectly possible that this accumulated energy would cause the black hole to ultimately fall apart, but again that’s not relevant to this discussion.)
Therefore, this is what I think the inside of a black hole would be like – a region of intense light, terrific radiation levels, and considerable heat. Quite like a furnace, in fact, with elements of nuclear reactor as well.
Come to think of it, that’s not too far away from the traditional Judaeo-Christian vision of Hell, is it?
Now tell me what you think.

Bill The Butcher- What a black hole consists of; a point of infinite density, known as the singularity, at which the laws of physics might break down; and this is which is surrounded by a region of gravity so intense that light can’t escape it.

Ten Ways Satellites Have Been Used to Spy on You