Never Talk About this Again 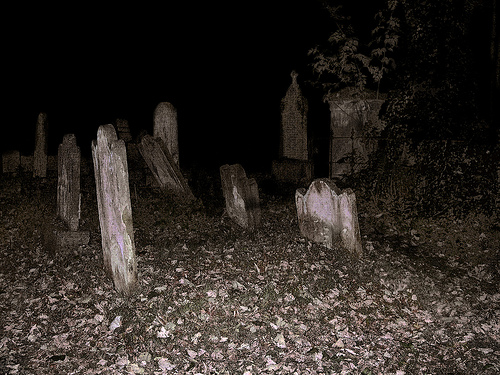 “I’m bored,” my best friend, Joe, complained one night as we sat in my room over lit candles. The room was dark; stern faces brooded over our shoulders: pictures cut out of magazines, whatever randomly struck me, splayed all over my walls in a nine-foot collage.

“Wanna go to the graveyard?” I pointed out the trailer’s flimsy little slip-up windows, made of plastic.

“No way. You’re nuts, Mike. At night? No way. Some killer would probably come after us or something.”

“Some killer? Jesus, Joe, are you freaking serious?”

He didn’t answer, poking at some hot wax. The candle dipped and flickered.

There were so many stories about the graveyard: it was haunted, Satanists sacrificed animals there, strange lights had been seen and tinkling noises heard. It had attained a mythic status not just in my neighborhood: the whole area was semi-famous, having been shown once on the Discovery Channel as a forest where “Bigfoot” had been sighted.

“Hey,” I insisted. “We’d probably be the only kids at school who can say we’ve been to the graveyard at night.”

That caught his attention. Joe preened over his reputation like a peacock over its feathers, wanting to be bigger and brighter than anyone else. Slowly, he nodded, peeling the cooling wax from his palm. “All right. I’m in.”

We slipped out into the violently beautiful night. The wildness of the wind turned our eyes skyward; gray clouds blotted out chunks of the sky. We came through long rills of grass, moving between clutching, scratching bushes and trees to the graveyard where lustrous white stones stood in sedentary rows.

We walked among them for a while, reading names and dates, listening for any strange chimes or ghost voices. We heard nothing but the wind.

“Come on,” said Joe after a while. “This is dumb. Nothing’s happening.”

The cliffs were up a short rise to the east, where the land suddenly fell away to overlook a huge vista of treetops and a little winding ribbon of creek. We trekked past an empty, rusted car hull, out boots gripping the slide of dirt and rocks.

“You don’t think there are Satanists out here?”

“I saw a lantern down there once. In the night, in the winter, a cold rain. Who the hell would be way down there with a lantern?”

We came into the clear and the vast panorama fell away below us, breathtaking. The moon reflected in the distant water and the trees tossed their showy heads in the rough wind. We paced along the high ridge, eyes more on our own feet than on nature’s beauty for fear we might fall.

Then Joe did fall. Just a stumble to the right, but as his ankle gave and he spilled to the ground it was enough to make me cry out.

He had been about to laugh, but I saw his expression freeze and it chilled my heart.

In the darkness’ shadows I realized what he had stumbled on: the edge of a pit, not very large, but a couple of feet deep and littered with bones.

If these were animals, they were deer, at least. But as I helped Joe to his feet, wrist grasping wrist as he rose, my gut knew better. And then I saw a skull. Round, with flat teeth. Human. With a hole knocked out in the front of the forehead.

I was struck dumb.

“We gotta…” Joe said, then licked his lips. “We gotta tell the cops.”

“But what—what do you think it was?” I asked.

He didn’t need me to tell him twice. We shot out of there, him limping a little but not letting it slow him down. We slammed into my house, me yelling: “Dad! Dad!” I couldn’t keep the hysteria out of my voice.

He creaked open his door, bleary-eyed, standing there in his stained undershirt and boxers.

I hated it when he called me Mikey but I didn’t have time to register annoyance right now. “Dad, there’s a pit out in the woods—we went out to the graveyard and then up to the cliff—and Joe tripped in it—” My words stumbled over each other. They didn’t know how to come out. My dad stood there waiting, his face set like granite, showing no belief, no panic, just a blank waiting for me to spit it out.

“Bones, Dad!” I shrieked, losing it. “We found a pit full of bones. I think—I think— Human bones.”

“We gotta tell the cops,” Joe chimed dully from behind me.

“Oh, Mikey.” My dad shook his head in dismay.

My dad took a couple of steps forward. “I believe you,” he said. “But I wish you hadn’t found it. Mikey, you know I wouldn’t hurt you for the world…” As he stepped forward his shadow fell over me and my best friend. “But you found it.”

“Dad!” I shrieked. He grabbed for Joe and I leapt back, seeing Joe’s dumb cocky Reebocks get lifted off the floor. My dad was strangling him. My best friend. He was going to kill him.

For God’s sake, he was going to kill me!

My eyes cast wildly around the room and landed on the shovel leaning tilted behind the door. My dad used it out in the yard for digging up roots. I gripped it hard in both hands, lifted it, ready for the moment my dad would swing around and his eyes would fall on me.

Joe’s chokes rattled in the room. Weirdly, I felt surprise. I never thought a death rattle was real. Then Joe fell to the floor, limp, the sharp stink of piss staining the air. My best friend just pissed on my floor.

Dad’s eyes landed on me, standing there at the ready, defensive.

“Dad,” I said, holding the shovel high, “you’re gonna need help widening that pit. And we should cover it up.”

After a short pause, my dad smiled. His hand fell on my shoulder so had I winced. Then he gave me a satisfied, proud shake.

Savannah Thorne- There were so many stories about the graveyard: It was haunted, Satanists sacrificed animals there, strange lights had been seen and tinkling noises heard. It had attained a mythic status not just in my neighborhood; the whole