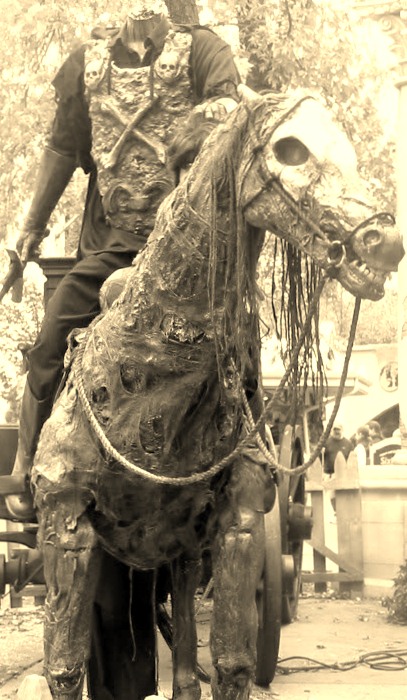 Subversify welcomes Mike who  hails from the Emerald Isle, a born and bred Irishman from the east coast of Ireland – he has been living on the outskirts of London (on the Essex border) for the past 45 years. He is lucky enough to have Epping Forest on his doorstep.

“’Hould yar whisht now” Granddad Gorman broke the sleepy silence as we all sat around the turf fire feeling drowsy after our evening meal and before we went to bed. He jumped up from his chair and almost ran to the little window that looked out onto the road. Although I was only seven or eight at the time I realized that he was frightened as he looked a bundle of nerves. I also saw Granny Gorman drop her knitting and take up her Rosary Beads.
We, that is, my brothers Ger and Jackie, were ‘down the country’ back home in Ireland for a short holiday late in the year 1948. I loved it but without even radio and certainly no electricity in the village, the dark early winter evenings of October left us with little to do a lot of the time. Some nights Uncle Mick and Uncle Jack would read us something from one of the many books that lay on the shelf but I much preferred to hear their stories. Although many were gruesome and horrible and regularly gave me nightmares, I still loved to hear them…………..
The reason for Granddad’s quick reaction was the sound of crunching wheels and horse hooves rattling on the roadside not far away from the front of the house. I had in fact heard them but had not taken any notice. I thought that it was probably one of the local farmers making their way home after working in the fields.
“What’s wrong Granny?” I asked. “Shush now Michael, your Granddad will tell you all in good time” she spoke softly and quietly. Granddad continued to look out the small window, then turned and said to us, in particular Granny – “Tis the damn Dullahan that will surely bring bad news upon the village”. He made the sign of the cross which made me more nervous.
Twice more in the next ten or fifteen minutes, the noise got louder then faded away. I am almost certain that I heard a scream or two from some distant house. Apart from that you could have heard a pin drop…………….
Eventually Granddad returned to his seat near the fire and all was as quiet as a tomb. “Go on Granddad” Jackie coaxed “tell us about the Dulli or whatever you called it. Is it a ghost or are you just pretending?” Jackie was a disbelieving little so-and-so and would in fact if he had been dared to do so, gone outside and shook hands with the devil himself. He began to snigger………..

“Laugh?” Granddad asked “so you think the Dullahan is a figment of me imagination do you?  Well let me tell you that one of these dark nights you will as sure as hell meet up with the blackguard himself and I can tell you that he will soon wipe that smile off your face”. I thought that Granddad was more than a little annoyed with Jackie.
“Tell me Granddad” I spoke softly from my little perch on the hob close to the fire, “I’ll believe you”. “You’re alright Mick” he spoke softly to me “but them that mock the spirits come to a sticky end in the long run. You mark my words”

I think that Jackie understood what Granddad was saying for the smile was no longer on his face. “I will believe you too” he said “please tell us about the Dullahan”.

Granddad went through the usual rigmarole that I knew only too well when he was about to tell us a story. He slowly took out his pipe, filled it with tobacco and as he lit it, he puffed away gently, blowing the smoke towards the fire.
“The Dullahan” he said “is probably the most frightening of all the fairy folk that you are ever likely to encounter. Maybe I should say that he is the one that you should pray every night that you will never encounter at all”. Granddad paused and puffed away knowing right well that we were hanging on his every word. He slowly continued.

“You see” he said “in the old Gaelic; he is called the ‘Gan Ceann’. Now tell me, who knows what that means in Irish?” Ger and Jackie made no reply but I knew what ‘ceann’ meant. I said “Something ‘head’, Granddad”. “Excellent Mick, I knew these two amadans couldn’t hold a light to you. You are quite right, it does mean ‘head’ and ‘gan’ means ‘without’”. As he finished speaking I suddenly had the vision forming in my little head of something, or worse still someone, without a head.

As I have said often before, Granddad had the ability of reading my mind like an open page. “Yes indeed Mick, a most fearsome man without a head. Now when I say without a head, that’s not quite true. He carries his ugly ould head under his arm. Two great big shining eyes and a grin on his face that would frighten the devil himself. You see it goes from ear to ear”. He paused for a moment and puffed away with his pipe as if waiting for this information to sink in. Jackie sniggered.

“Oh yes you little brat” Granddad said slightly annoyed at him “and he carries a whip made of bone. You know that bone that runs down your back from your head to your backside? Well that is what’s called your spine and his whip is made up of a human spine”. Again he paused for effect.

“He always has a big black horse that pulls a wagon and guess what?” he asked. “No” I replied afraid to guess anything at this stage. “Well now” he continued “the spokes of the wheels are made of human leg bones and dried human skin covers the wagon. Now Jackie me boy, how to you fancy meeting him on a dark night?”

This time Jackie did not snigger. Granddad continued. “As long as you can hear the wagon wheels crunching on the road you are safe for as soon as he stops he claims a body from close by. Makes not a hape-worth of difference whether it is a live or dead person, he claims him and takes him away. The only thing is that if the person is still alive, the Dullaham calls out that person’s name and good God Almighty but that same person there and then drops dead at the mention of his or her name”.

“If you say your prayers Granddad” I asked quietly “does he leave you alone?” “Not a chance Mick. When the old devil puts his mark on you, sure you are a certain gonner. All the prayers in the world won’t save you. Your only hope is that you died in the state of grace cause then he won’t be able to get you into hell and you will find yourself at the gates of Heaven”. As he said all this, he put his right index finger to his lips and nodded towards Jackie who was staring into the fire. He then, believe it or not winked at me.

Now usually at this stage of one of Granddad’s horror stories I would have a hard time not peeing in my pants but I was now immediately relieved in a more sensible meaning. I kept a straight face and winked back at him………………………

“And another thing Jackie” he continued, now speaking directly to my brother, “there is no use trying to block his way for you know what. The blackguard will only throw a bucket of blood on you marking you for his next victim. Either that or he whips your eyes out with his spine whip”. I could see that Jackie was now cowering closer and closer to Granny and I gave another crafty wink to Granddad.

“So how do you stop him Granddad?” I asked. “Only the one way Mick” he replied “and that is to always carry something made of real gold. Do you have any gold Jackie?” he asked. “No Granddad” he whispered in reply “but I will save up all my pennies until I can buy some”. “Good” said Granddad “because you never know the day or the time that you meet him be it in the dark or during broad daylight. And another thing” he said “don’t make jokes about such people or one of them might come for you much earlier than you expect”. I could see that this warning brought tears to Jackie’s eyes.
A few minutes later, Granddad opened the front door and stood outside in the dark. I joined him but neither of us spoke for a couple of minutes. I started off by saying to him “That was a good one Granddad; you frightened the daylights out of Jackie. I am glad that it was not true”.

“Not true?” Granddad said loudly “how dare you suggest that I would tell you a lie. The whole story from start to finish is as true as I am standing here beside you. What on earth makes you think it was not true?” he asked. “But you winked at me when you were telling it” I protested. “Winked?” he said “sure wasn’t it just a bit of dust from the fire that got into my eye and I never did it on purpose”. I now moved back towards the light of the doorway.

“You mark my words young Michael. The Dullahan is the real thing and I hope to God that it is many a year before you hear the grinding sound of those wheels and the noise of horse’s hooves outside your very own door. For as sure as eggs is eggs, it will bring sadness and misfortune to you and yours”……………………

So – that was my introduction to the Dullahan and you know something? I believe every word of it. Hopefully please God, I have a few more years before I hear the sound of strange wagons and horses in our road on the outskirts of London for I can assure you that it would be an awesome sight and frighten the life out of half the neighbourhood……………………..

(The Dullahan is truly a character in ancient Irish storytelling. The more horrible and frightening the storyteller makes his tale the more respected he becomes. Over the years, the story has travelled far and wide and is believed to have inspired the screenwriting of the film The Legend of Sleepy Hollow’).

“You’re alright Mick,” Granddad spoke softly to me, “But them that mock the spirits come to a sticky end in the long run. You mark my words…”

Never Talk About this Again