Whittier: the Town that is Unique even in Alaska

The Temperature is Sideways

Whittier has everything.  Tall, snow capped mountains surround the ice-free deep water port, glaciers slide into the bay, waterfalls thunder furiously, seals and sea otters paddle close to shore, eagles scream through the air and alpine flowers decorate the estuaries.  Called the Gateway to the Prince William Sound, even giant cruise ships nestle in its harbor, and the Alaska Railroad attracts tourists regularly in special train cars.  The fishing is astounding.  What Whittier doesn’t have is good weather.

The Prince William Sound is covered with islands, riveted with small inlets and is ideal for kayaks and rafting adventures.  The coastal towns southeast of Whittier; such as Juneau, Valdez and Cordova; are notorious for their rainy days.  They average out with over two hundred days of precipitation a year.  Whittier has about the same number of days of clear weather.  The biggest difference is that while the southern towns below its gate count their days of precipitation with overcast skies and light, drizzling rain, Whittier exuberantly enjoys downpours.  At the end of summer, the blustering winds move in.  The weather alternates between hard rain and sideways rain.  As winter creeps along the path of furious gales, the sideways rain turns to sideways sleet than sideways snow.  There it remains blanketed, usually a good two weeks after the rest of Coastal Alaska has been blessed with the budding greenery of spring.

From Military Base to Industry

Whittier received its birth as a secret military defense base during World War II.  By blasting a three and a half mile tunnel through the side of a mountain and laying down railroad tracks, they developed a perfect route for sending cargo from the heavy barges that could not make it into the far more shallow Anchorage harbor.  The tunnel makes it a straight, sixty mile shot from Whittier to Anchorage, a route that would have been over a hundred rough, treacherous miles if a road had been designed through the crown of mountains that cradle the Portage Glacier.

For years, the train remained the only access in and out of Whittier, apart from the ferry system.  Travelers wishing to visit Valdez, Juneau or  further south to the Panhandle towns, shortened their travel time by boarding their cars on the train going into Whittier, then shuffling them to a ferry.  For local residents, a train ride to Whittier was as entertaining as spending the day in a giant water park.  Boarding the cars was expensive; twenty dollars for the five mile ride, plus a head count fee, but you got to stay in your car while it boarded up and remain there as the train chugged through the tunnel.  It was party time in the dark bowels of the earth, dim yellow lights flickering by, the churning of the train engines deafening in the echoing chambers of the tunnel.

In the year 2000, the State of Alaska completed a project to turn the Whittier Tunnel into a one-way combination rail and highway access.  Traffic going into Whittier passes through on a fifteen minute hourly schedule.  The traffic returning to the Cook Inlet is scheduled for fifteen minutes at half past the hour.  As there is plenty of sight-seeing on both sides of the tunnel, if you time your visits strategically, there is never a very long wait at the toll booth before being allowed to pass through the tunnel.  For twelve dollars, you can step from the modern hustle of mainland Alaska to the robust coast of the Prince William Sound. 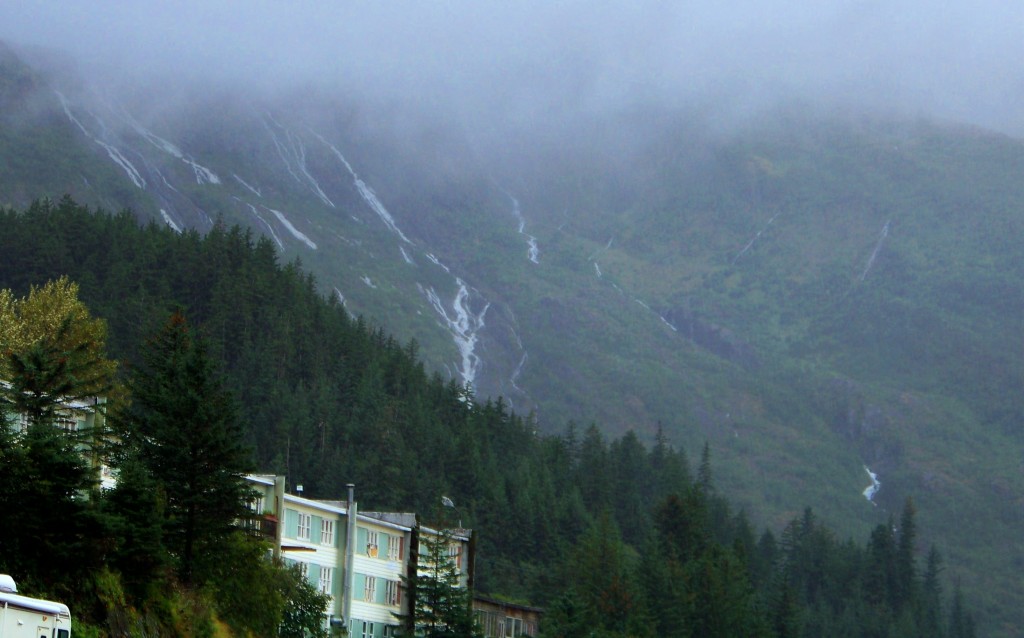 There is a sense of surrealism in driving the tunnel to the other side.  Not only is the climate markedly different, there is a sleepiness, a laid back ease about Whittier that makes you forget there is such a thing as appointments, schedules and pressing issues.  If the weather is good, you pass your time on the hiking trails, picking berries and wandering among the quaint shops along the water front.  It the weather is poor; well, there is only one reason why you are there anyway.  You’re a hard core fisherman and you want to fill your freezer with the last of the migrating fish before the winds of winter drive them into deeper waters.  The torrential down-pours, the sideways rain, the hail and the sleet don’t bother you.  Once the season is over, you can take off your saturated boots, change into dry clothing and curl up in front of a warm fireplace, satisfied that you’ve insured your family sustenance for the winter.

There is a sense to Whittier of always being a little behind the times, of attempts at modernization that eventually became discouraged in the face of newer technology that will deteriorate with the relentless climate or slowly incorporate itself into the existing structure.  The first buildings; old army barracks and military quarters; are still standing, although rusted and crumbling.  A row of apartments remain half cared for, half deserted.  The majority of the town own apartments in a condominium called The Begich Towers, which also includes the City offices, the Police Department, A medical clinic, the Post Office, a grocery store, a Laundromat, a vending snack area, and Bed & Breakfast units.  Built and incorporated in 1974, it was hoped the 196 apartment units would attract more people willing to settle in the town.  Whittier has never, nor currently has more than two hundred year round inhabitants, despite receiving over 160,000 tourists per year during the summer months.

The massive two and a half minute earthquake with its fifty three after-shocks that occurred in Alaska in 1964, destroying half the City of Anchorage, burying the town of Portage in a mud slide, buckling the road between Butte Sutton, forty miles away from the epic center, also triggered a tsunami that washed out the towns of Kodiak, Seward, Valdez and Whittier.  Power generators out, the railroad tracks destroyed, an uncontrolled oil fire burning from stored barrels at the docks, Whittier was stranded.  Two young men, carrying a list of the dead and the supplies needed for the living, walked out of the town and through the tunnel to the other side where Portage and the Turnagain Arm lay twisted and sabotaged beyond all recognition.

A rescue helicopter spotted them and picked them up.  The bereaved families were notified and a team went into Whittier to assist the survivors.  Washed out Portage perished with the earthquake.  The silt water tides returned again and again to reclaim the land where once had sat buildings, homes and gardens.  Whittier resurrected.

With nineteen people dead; a tenth of its population; Whittier began to rebuild.  Although the railroad tracks had been destroyed, the tunnel was intact, proving itself to be an incredible feat in modern engineering.  The reconstructed town turned its head toward tourism as a means of supplementing their shipping and fishing trade, hoping that the additional job opportunities would entice new people to stay.

The population has remained stubbornly the same.  Apparently, most Alaskans would rather brave the more temperate climate of the Cook Inlet, or the frigid winters and hot summers of interior Alaska than the riotous gales of Whittier.  Even though the wages for construction workers and laborers was two to three times more than the pay in the Anchorage Bowl; just sixty miles away; most field workers preferred to take three to six months contracts, fluffing up their bank accounts while their families  remained on the Cook Inlet.  They viewed their contracts with Whittier much as they viewed a hitch on the North Slope oil fields or a remote Aleutian Islands.  Said a sheet metal worker after a six month, forty dollar an hour job in Whittier, “it’s the most desolate place on earth.  There’s nothing to do in the winter except sit around in a bar.”

It’s possible these temporary workers had not learned a secret about Whittier that has come to the surface only in recent years.  Not only were the early inhabitants of Whittier capable of building a tunnel that could withstand an 8.6 earthquake, they had seeded the later inhabitants with the idea of building a tunnel system between their buildings.  Tunnels connect the row of 1960’s apartment, the Begich tower and the school building.  When the rain, the sleet and the snow pummeled sideways into the town, the school children no longer had to battle it to go to school, neighbors did not have to brave it to visit each other, the long hours of winter did not have to be spent idling in a bar, waiting for the weather to clear.  They could commute, safe, warm and dry, through the tunnels.  There is even a tunnel for the general public of tourists who make their way to Whittier during the spring and summer that burrows between main street and the docks.

There has been a change in the attitudes of the younger generation seeking work in Whittier.  One young man from the Cook Inlet region was hired on to work the docks shortly after graduating from highschool.  At the end of his six month contract, he decided to make his home there.  “I like Whittier,” he said during a visit to his home town.  “The pay is good.  Rent is reasonable.  The people are friendly.  I think Whittier can grow.”

In the All American town of Anchorage, which reflects the same problems exhibited in cities all across America; a collapsed housing market, spiraling cost of living rates, homelessness, joblessness and racial tension;  other young people are weighing the advantages of relocating in Whittier.  With the opening up of the Anton Anderson Memorial Tunnel to vehicular transportation, commuting between the Prince William Sound and the Cook Inlet has never been easier.  There is an appeal in Whittier to the pioneering spirit of Alaska’s youth in its largely unexplored wilderness, its foothold with the Panhandle islands, its earnest attempts at progressiveness, its strong determination to survive.  And, like all pioneers whose attraction is more towards novelty and innovation than to tradition, they contemplate what it would be like to be one of the tunnel people.  The town that wouldn’t grow might yet one day be, the town of the future.

Karla Fetrow-Unusual towns are the norm in Alaska; but none strike quite the same unusual beat as Whittier, the town that commutes by tunnels. A deep water port with ferocious gales, this hamlet by the sea is unforgettable.