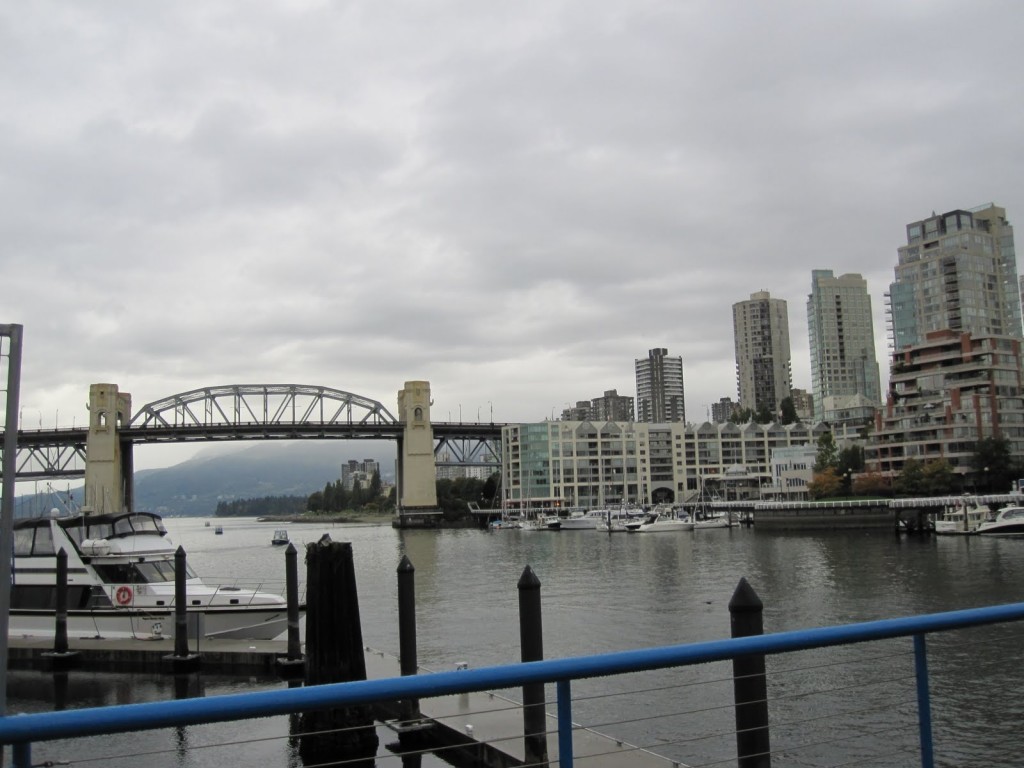 Vancouver is a magnificent “Jewel of the Pacific” type of city in the grand old tradition of Shanghai, Valparaiso, San Francisco and Sydney — built overlooking water, it has an interesting history, a cosmopolitan population and lots of trees.  Vancouver is a beautiful city — with an element of Asian-fusion to it that also makes it interesting, exotic and chic.

At Vancouver’s exquisite Sun Yat-Sen Classical Garden, I learned a lot about ancient China.  First I learned that scholars were highly regarded there back in the day.

“The most highly-honored class of people in ancient China were its scholars,” commented a museum docent.  “And next in order were its farmers.”  Did I hear that right?  Somebody actually honored farmers way back when?  They must have been referring to some ancient Chinese agribusiness CEOs.  Nobody I know of has ever honored mere farmers, the people who feed us each day. 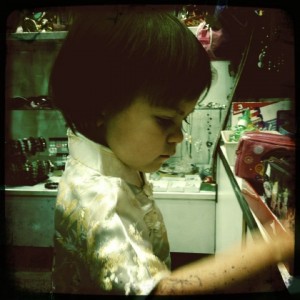 “The third category to be honored were the artisans.”  Apparently arts and crafts were really big in old-school China.  And apparently the last, least important category of importance in bygone China days were the corporatists.

In ancient China, however, this four-tier categorization obviously didn’t work out so well over the long run — but at least they tried.  Here in America, a country that is supposed to be a democracy, corporatists are obviously kings — and 99% of us know how badly that arrangement is working out.

Next, I learned that every Chinese scholar’s garden must have four basic ingredients — a building, a plum tree, a pine tree and some bamboo.  “But what about Feng Shui,” I asked the docent.  The four principles essential to having good Feng Shui (usually translated as “harmony”) in one’s life are safety, beauty, organization and comfort.  “This scholar’s garden is certainly beautiful and safe and definitely organized — but is it comfortable?” I asked.  Would I just want to flop down, kick off my shoes and watch television here?  Not. 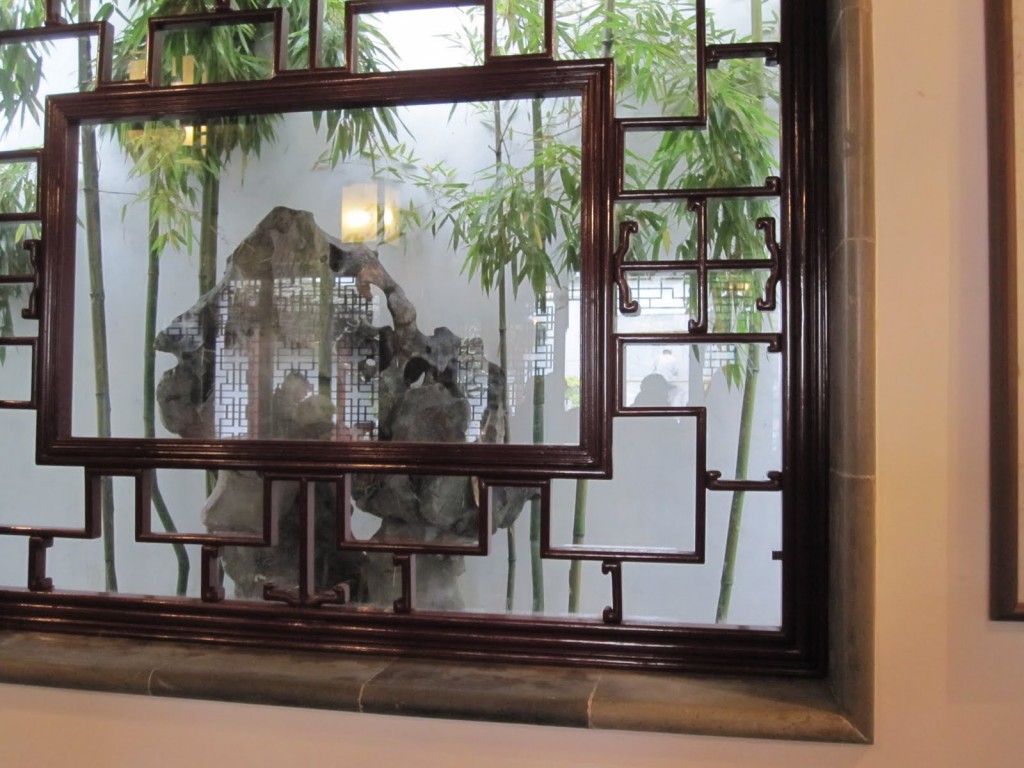 “The comfort that scholars got from their garden was in its beauty,” replied the docent.  Oh.

I also learned that in modern-day Vancouver, 25% of its population is between the ages of 18 and 25 — because students from all over Asia come here to study English.  “And just before Hong Kong was taken over by mainland China in 1997, many Hong Kong residents moved here and bought condos in downtown Vancouver,”  There is also a large Japanese and Tibetan presence here, giving this city a real feeling of Asian-fusion, cultural diversity and Pacific Rim internationalism. 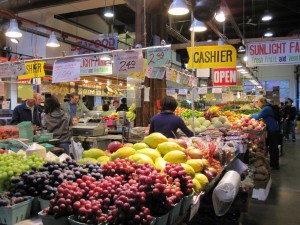 Next I went off to Vancouver’s large Granville Island farmers’ market to honor some farmers by buying a peach.

By now I’ve been traveling for over 2,200 miles and my knees and right ankle were really hurting, forcing me to forgo visiting the famous Capilano suspension bridge’s cliff walk and tree house.  “Why don’t you try some medical marijuana to ease the pain?” someone then suggested.  Medical marijuana is legal in Vancouver?  They don’t have drug cartels and drug lords running it up from Mexico with AK-47s like they do in the States?

“Of course it’s legal here.  We are a civilized nation.”  Except, perhaps, for Steven Harper — Canada’s answer to folks like Bush and Reagan and Obama and Blair.

So off I went to a doctor and showed him a medical report on my knees and ankle, and also showed him my nifty blue handicap sticker which I love so much that I’m thinking of having it tattooed on my arm.  Then the doctor asked me a few questions like, “How did you get injured?”  So I told him about falling down some stairs in the Peace Corps in South Africa back in 2007.  And then, after asking me about how easy it would be for older people to join the Peace Corps (pretty easy), he signed a paper saying I needed marijuana to ease the pain, and I was good to go.

Next on my tourist agenda is going to be a trip to a marijuana dispensary.  Should I do this?  Will it help?  Is medical marijuana expensive?  Will it make a good souvenir?  I’m about to find out!

PS:  Speaking of Feng Shui, I just gotta mention that the corporatists who currently control both the government and the economy back in the States have not created any beauty or comfort or safety or organization in America (nor any democracy either).  American corporatists have bad Feng Shui!

Let’s do something about that.

Perhaps we also need to occupy Congress, the White House and the Supreme Court as well as Wall Street — in order to bring good Feng Shui back into our lives.

What a great slogan to chant that would be.  “Beauty!  Comfort!  Organization!  Safety!” 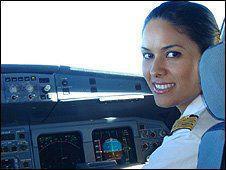 From Sandra Barr on FaceBook:
Under Muammar Gaddafi women had equal rights.  Four decades of Libyan women have now had the freedom to get a good education, marry who they chose and wear what they want.  The new NATO backed terrorists have introduced Sharia Law, women are now the property of their Fathers or Husbands and MUST wear the burqa.  This very beautiful Libyan woman is an airline pilot.  This could never have happened only for Muammar Gaddafi.

****
Occupying the Future — with Keith Olbermann:  Fox News is trying to make us afraid of rioting in the streets (as compared to economic slavery and exploitation?) http://www.youtube.com/watch?v=cBV7ACTl-Bc&feature=colike

Jane Stillwater- Vancouver is a beautiful city — with an element of Asian-fusion to it that also makes it interesting, exotic and chic.

Whittier: the Town that is Unique even in Alaska