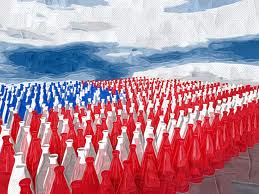 In David Lynch’s “Twin Peaks”, there’s a Red Room, where a fellow called The Man From Another Place helps people find the truth. The problem is that this only happens in the subject’s dreams – it’s up to them to sort out the truth when they wake up back in reality.

Those of us who Stayed Awake in Class have the habit of pointing out reality on a regular basis to the Rest of America – the problem is that we don’t get the props we should, because most of America has Gone ‘Round The Bend.

Welcome to the Surreal States of America, folks – where reality doesn’t apply.

Today, over 60% of Americans believe that a guy named ‘Jesus’ is coming back, Real Soon Now, to sort-out all the bad-people (read: ‘anyone who doesn’t believe like us.’) He’s going to raise all of the dead-people who believed just like the semiliterate assholes above-ground nowadays (you’ve seen them on Fox News and on Glenn Beck’s show; they’re the folks who think David Barton is a real historian, that Obama’s a not-so-secret socialist, and that the only way to set things straight is to listen to the dog-whistle of ‘take America back’).

When ‘Jesus’ comes back, he’s going to take his legion of Born Again Zombies and establish a Thousand-Year Reich here on earth (where, ostensibly, there’ll be no crime, unemployment, or worries about things like Kim Kardashian’s ass).

There’s a subgroup of that 60% who not only believe that ‘Jesus’ is coming back – He’s so pissed that He’s exacting ‘judgments’ on America and the rest of the world (this is why we have such an abysmal economy and why we’re mired in two and a half wars, as well as suffering from tornadoes, drought and flooding).

In their world, our economic issues don’t exist because we’ve elected a succession of Presidents and representatives who’ve Fucked Things Up, royally – it’s because of everything from gay marriage and abortion to a general rejection of All Things Jesus. In their world, if we loved Jesus enough, we’d already be living in a paradise akin to 1955 America (minus polio, lynchings in Mississippi, and the Cold War).

In their world, tornadoes, drought and flooding don’t exist because we didn’t heed the warnings of futurists who told us that too many people on the planet would create such things – they’re because ‘God’ doesn’t like what we’re doing – we need to stomp the gays; put women and minorities back in their place. Oh, and we have to support Israel. We’re ‘cursed’ if we don’t.

This subgroup of that 60% are called Dominionists – they’re bent on ‘taking America back’ (that’s the aforementioned dog-whistle for ‘let’s-go-back-to-the-17th-century’). Y’see, in spite of the lessons of history (from the Crusades and the Inquisition to one of the reasons for America’s founding – the persecution of one religious group by another), this bunch wants to form a theocracy in the United States.

The legal system is complicit in all this – if not, the Supreme Court would have shut down Bush II’s ‘faith based initiatives’ for the hare-brained, unconstitutional idea it was. Thing is, we’re now one justice away from a Fundie-dominated court. They’ve all but ignored the Constitution with rulings like Citizens United – see; in the Surreal States, corporations are now people; by allowing the government to use taxpayer money to fund religious groups, the First Amendment no longer applies, either.

According to people like David Barton, the First Amendment only applies to ultraRight Christians – all other religions are not covered – this is because the Founders somehow intended Christianity to be the nation’s religion after all. “Congress shall make no law regarding the establishment of religion” means “Congress won’t allow any but Christians to hold office or make laws.”

Gee; when you put it that way, it all makes perfect sense – that is, in a country where logic and reason play second-fiddle to religion.

Dominionists have made it clear that they want the legal system – and they’ve done a good job, both infiltrating it and creating a new crop of ‘Christian jurists’ courtesy of outfits like Liberty University; they want the military, too, and they’ve done a good job of that, also (organizations like the Military Religious Freedom Foundation have raised the alarm on this one more than once).

Economically, we’re no better off. Our current President was elected on the back of a ‘bailout backlash’. We expected him to deal with a lot of the problems created by the eight years of the Bush regime; those of us who connected the dots on these things realized that he had a very narrow window in which to accomplish anything of substance; instead, he set about planning for a second term by way of pandering to people who wanted him gone in the first place.

The facts are available for anyone who wants to spend ten minutes doing some real research – everyone from the GSA to Fortune Magazine has the data – it was the Republicans who wrecked our economy. Their only solution is to let the perps off the hook and make the rest of us pay for their behavior.

Now, we have two and a half wars, one which has been going on for ten years now – and no way to pay for anything. Nearly one fifth of the country is out of work. The current status-quo is unsustainable, and the man in charge squandered his chance to set things right. The banks which got that bailout money are all sitting on that pile of cash, waiting to buy up what remains for a song and a dance when the whole thing falls off a fucking cliff.

In any sane world, most of the nation would have put an end to this a long time ago. Instead, there are two kinds of people in America now: Those who are aching for a religious-themed Fascism, and those who still believe that the current President has answers.

The first group is likely to win this fight, because they’re better organized, better focused, and more passionate about their position. They also believe that they have a deity on their side who’ll show up with a bronze-age book full of religious hoodoo in one hand and a flamethrower in the other to sort out anyone who stands in their way.

It is impossible to argue with this kind of insanity in a manner which appeals to logic and reason. The sitting President is about to learn this, and then some; it’s the lesson every pandering centrist has ever had to learn – you don’t reason with snakes. You cut their fucking heads off.

Don’t think that pointing out any of this is going to make you any friends, either. In fact, thanks to some of the caprices of the past administration, if you step out of line too very far by way of protest, you’re more likely to have a couple of taser-prongs shot into your hide and your ass thrown in a jail-cell, while the ‘progressives’ stand meekly aside and wonder what happened – violence begets violence, and we’ve had a decade of body-counts, photos of half-burned children and all that follows to desensitize us to the maltreatment of our own citizens.

America is a police state. Try applying for a passport; you’ll be asked to provide a complete biography now (hey; why pay people to compile dossiers on the citizenry – get the people to do it themselves).

Don’t believe me? Do some research. It’s all there.

Thinking about retiring in the Surreal States? Guess again. The Right isn’t content to take your civil rights. They’re coming for your Social Security; your Medicare; your private pension. They’re doing so in the name of ‘deficit reduction’. See, in their world, these programs are not funded by payroll taxes; they’re ‘entitlements’ – and hence ‘bad’, because no one deserves a ‘free ride’. This is what happens when a nation goes insane – they change the definitions; then the rules. Lies become truth. All that’s lacking is the Two Minutes Hate.

In a few days, American flags will pop up in neighborhoods all over the Surreal States, in a vain attempt to remind us of where we used to live – meanwhile, there’s no Red Room and no Man From Another Place to remind us of what’s really going on, even in our dreams. The country continues on an insane path to self-destruction, and anyone who tells the fucking lemmings that they’re marching dutifully toward a cliff labeled “Fascism” will sooner or later be sorted-out for good and all by a Big Bull Lemming with one of those tasers I mentioned earlier.

W.D. Noble: Those of us who Stayed Awake in Class have the habit of pointing out reality on a regular basis to the Rest of America – the problem