Family Night at the Drive In Movies 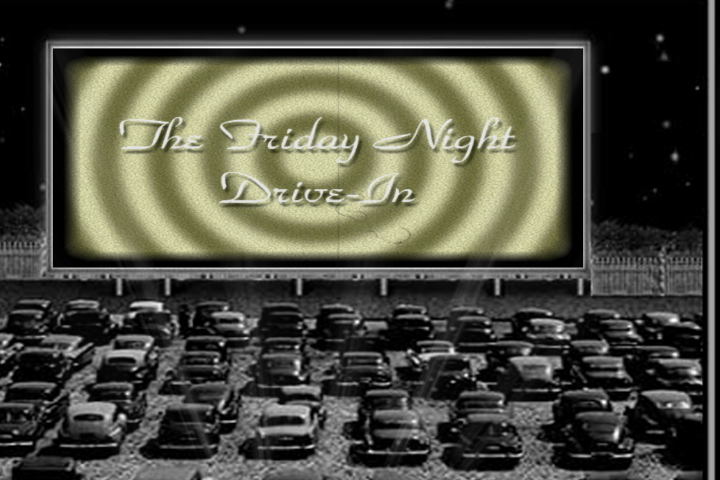 When the days grow short, with the precious sun spent in just a few hours that seem like minutes, and the northern wind whines, creeping over the earth in frozen foot pads, Alaskans huddle together and tell stories.  It’s mandatory, this huddling, this driving away of the dark and cold, and the conversations grow warm with laughter.  The children love it best.  They wheedle to hear what it was like to be a sourdough.  What they really mean is, what was life like before the rattle and clang, the rags to riches transformation of the pipeline.

Alaska was poor in the late nineteen sixties; not just your average poor, but almost desperately so.  Most homes were shaped together from whatever building materials were available, whatever time neighbors would donate to help them, and outfitted with furniture made from packing crates. Indoor plumbing was a luxury and half the homes were without electricity.  Produce was very expensive.  It had to be flown in.  Diets depended on dry staples, local farm products, hunting, fishing and gathering.  Despite their hardships, people were scrupulously honest.  If a car broke down on the side of the road, the first person to come along would stop and help.  The “Alaska or Bust” traveler knew he had made it as soon as he came over the border.  There was an open door policy.  That is, if it was late at night and you needed a place to sleep, all you had to do was drive up to the next house and knock.  If no one was awake, you threw another log on the fire, made yourself a sandwich and settled in for the night.  In the morning, the home owner would greet you and serve you breakfast.

Usually, wherever the vehicle busted, was where the owner ended up living.  “What can you do?”  The host might ask, and the vehicle driver would answer with whatever his occupation or specialty was.  “Well, now, Mr. Jones is wanting a shed built, and Andy down the road could use a little help at his shop.  I reckon we can fix you up.”  It didn’t matter who you were, teacher, welder, dentist or carpenter, you could find a place within the community.

Food was expensive, products were expensive, store bought clothing was expensive, but land was not.  You could buy an acre of land for a hundred dollars or own a 240 acre homestead as long as you built a house and cleared twenty acres for crops.  Another thing that came cheaply was entertainment.

There was only one theater that served the Anchorage bowl, a hundred mile radius that stretched from the ski village of Girdwood to the edge of the Matanuska Valley.  Most of the movie watching was done from a school auditorium, with the movies at least ten years old. The adults sat on folding chairs, the kids sat on the floor. There was a ten minute pause between each reel, in which time, we’d jump up to buy soda in a throwaway cup or buy a couple of home baked cookies supplied by the Homemaker’s Club. 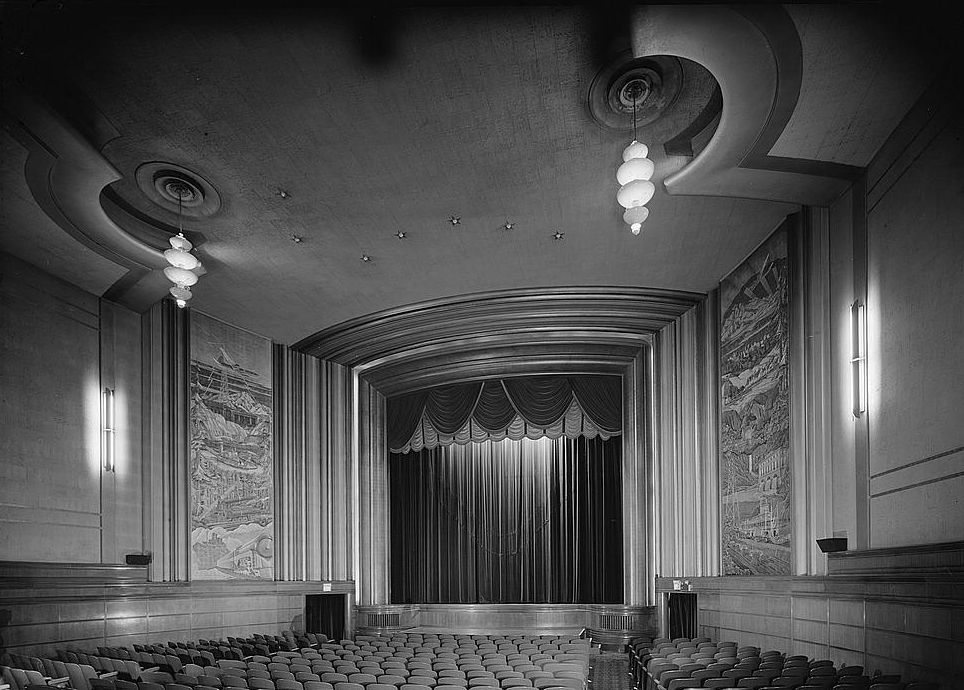 The Anchorage theater, called the Fourth Avenue, usually picked up the box office hits that had been circulating through the Continental US for the last year. The Fourth Avenue was remarkable. The amphitheater was domed and painted with pastel colored murals. Huge, gold colored columns rounded the two sides of the screen, with depictions of early settlement; the gold panners, the dog sleds, the locomotive, between the doubled columns. Deep cherry wood banisters circled the balcony. The stairs were wide, semi circles covered with lush, flower patterned carpeting. The seats were comfortable, thickly padded and covered with velvet upholstery. The bathrooms were spectacular! The first door you entered was a sitting room with cozy little sofas, chairs, and full length mirrors lining the entire room. The bathroom stalls had real wooden doors. The sinks and the spigots were ornate. When you went to the auditorium, you wore your every day clothes. When you went to the theater, you wore your Sunday best. 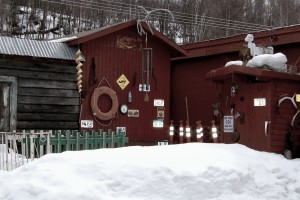 Sometime during the 1960’s, somebody, somewhere had the brilliant idea that Anchorage could use another theater. Not just any theater, but a drive-in. After all, it was all the rage in the Continental US. Why wouldn’t it be in Alaska? Anyone with half way decent reasoning faculties would have figured out what was wrong with an Alaskan drive in theater right away. The winters were too cold to sit through a movie comfortably. For those who didn’t know, keeping an engine idling for long in cold weather is very dangerous as monoxide builds up around stationary idle cars. The solution was to provide space heaters that sometimes worked and sometimes didn’t, but invariably drowned out the sounds of the movie, whether their warmth providing abilities proved effective or not.

In the summer, there was too much daylight. It isn’t possible to build an outside theater that blocks our summer sun as it travels in a circle around the sky. The projection on the view screen is so faint, the most enjoyable part of summer viewing is watching the sun moving across the distant mountains.

However, the Billikin Dive In was an immediate success, not just among the young people with a hot date, but everybody. In fact, if it had appealed to only the dating set, it would have busted in its first year, as early Alaska was a very family oriented community. And that was the key, right there. The enthusiastically socially oriented Alaskans saw the Billikin Drive In as the newest, coolest place for community gatherings. Every Friday, people would pile up their cars with the kids and neighbors and drive out to the Billikin.

It was ideal. Mom and dad didn’t have to pay a babysitter, and could take their most obnoxious kids and whining babies to the Billikin. They had the privacy of their own cars, yet close at hand, was a wonderful sparkling building where they could buy pizza, popcorn, candy, soda and find out who else had come to enjoy the movie. Nobody really watched that much of the movie, but there was a lot of car hopping going on. As soon as you recognized an automobile, you jumped in to join the company awhile until you recognized someone else that you knew. The average stay per vehicle was about twenty minutes. By the time you were ready to go home, you’d visited everyone you’d had a hankering to see all week. If the theater was packed, you didn’t worry. You just circled the block a few times until someone had done visiting and moved into their parking place.

The Alaskan population quadrupled in the first year of pipeline construction. It brought all kinds; workers, last ditch hopefuls, entrepreneurs, carpet baggers and criminals. The crime rate soared. The unlocked door policy was abandoned when homes were ransacked. Community gatherings dwindled into private affairs or were sponsored through organizations such as the schools, scouting, sports or churches. The stately, old world atmosphere of the Fourth Avenue was ignominiously replaced with a half dozen modernized theaters, slick in their wash and dry carpets, narrow, polyester seats and ample surround sound.  The Billikin Drive In collapsed. It died without a funeral.  A new form of etiquette had arrived in Alaska, and car hopping had a very low approval rating.  The Billikin tumbled from a family affair, to blatant attempt to win viewers through X-rated movies, then fell away into a parts and storage unit, unnoticed.

Alaska is a wealthier state, now.  While the tradition of building from scratch is still alive, land is expensive.  The young people prefer to hole up for the winter in furnished apartments or sub-let housing.  The movies they view use the newest technology, complete with 3-D imaging.  They are modern.  Yet I could see from the eyes of the children as we ransacked our memories for those glorious theater days, that the Billikin was something very special, something worth remembering, something that had a spirit all its own. Maybe there will never be another Billikin Drive In, but i like to think that among this new generation, growing up with wonderful space age technology right at their fingertips, will device a new way to hold delightful and entertaining community gatherings.

Karla Fetrow: Anyone with reasoning faculties would have figured out what was wrong with an Alaskan Drive In theater right away as the winters were too cold

The Dying Art of Comedy