Yearning For The Good old Days 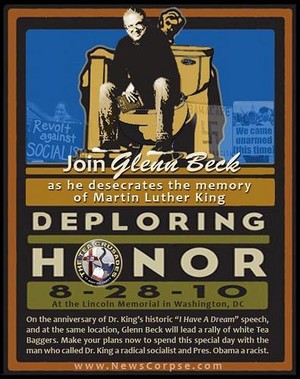 An over-estimated crowd pressed toward the Lincoln Memorial, straining to get a view of their television hero and the self-0styled “grizzly mama” from Alaska. The crowd is as white as a newly bleached sheet. It is lower to middle class, under-educated and, at least in a self-styled way, Christian. It is a crowd that has felt under-served, under-appreciated and under-represented. It is a crowd that, in its frustration has latched onto a manipulative television personality whose half truths and crocodile tears have moved them toward this day in the Nation’s Capital. The bonus is, of course, the presence of the shrieking violet from the North, the personification of governus interruptus, the former Governor of the great state of Alaska.

Although this day is billed as non-political and pro god, it is very political indeed. The crowd is dressed in everything from conservative clothing to the many wearing their anti-Obama drag (“Where is the Birth Certificate?”, “Impeach Obama”) and t-shirts extolling their presumed status, (Protect red- neck babies.) And the mere presence of Sarah Palin insures that the day has political overtones. The very fact that this Caucasian assembly has decided to meet on the Anniversary of one of the most important days in the Civil Rights calendar, that this demonstration chose the site of one of the most important speeches of the many speeches made in the name of Civil Rights and the fact that some of the rhetoric of the day speaks of “taking back the Civil Rights movement that is rightly theirs, all of this says that this meeting is most definitely political.

These “tea baggers” (and how I love their use of that term) want to take back their country. They want to return the country to their concept of the “good old days.” What does that mean? Does that mean the days of their youth when family values existed, the streets were safe, and the United States was a Christian country? Is that what they mean? Is that what Beck and Palin have come to symbolize to them? Is that what is at the core of the delusions that drives this group?

It does not take a genius to know that so called “family values” have never been strong points in our history. There has always been rancor in the home. In the days before divorce could readily be obtained, the wife often was in the position of suffering in silence because she really had no rights. Children were often at the mercy of dysfunctional parents… they were abused and beaten without an advocate to look out for them. Children born to a single mother were ostracized and made fun of and it was justified by the fact that they were, after all, bastards, and their mother was a “loose” woman. The man, of course, walked away with reputation intact, free to impregnate someone else. There were happy families back then, just as there are happy families today. But the difference is that marriage is no longer a prison for those who enter into it, and children can be protected.

The streets were never really safe. There were safer neighborhoods, but by no means were all streets safe. Some were neglected and therefore people from the “good” neighborhoods wouldn’t go into them. But, there was crime in our cities, and murders in our rural areas. The poor were cheated and exploited. Poverty reigned supreme among minorities and among the poor whites of this country. Laws supported by the churches in this country, Prohibition, and those that forbid the use of birth control led to further crime and further misery. Did anyone really want the church in their bedrooms? Yet it was there in the good old days.

Those good old days! Who were they really good for? They were good for the white, Anglo-Saxon, heterosexual male. Women were hardly better than chattel, and had very few rights until the Women’s Movement wrested them from the grip of their husbands and employers and yes from the paternalistic churches as well. People of color owe the progress made to the efforts and the sacrifice of Martin Luther King, Ralph Abernathy, Rosa Parks and the countless others who were beaten, hosed and murdered so that all of us, black, brown and white could have a time of rapprochement and move forward together. Those days were certainly not good for the Gay and Lesbian people in this country. In fact, as much as it was true with racial minorities, it was also open-season on gay people. They could be and were beaten at will by bullies and bigots, and for the most part they had little or no recourse. The police were, for the most part, unavailable. Point of fact, the police were too often a part of the problem, rousting gay men and women in the bars that at that time were their only places to meet. And how about the elderly? There were no laws that specifically looked at elder abuse. Too many of the elderly lived in poverty, and before the great Claude Pepper and Maggie Kuhn, had no one to speak for them.

When we are given a telescope back to these good old days, let us remember that this glass distorts our view. There was no real “Father Knows Best.” Our music from those days is wonderful and can often take us back to moments that were warm and beautiful to remember, and most of our favorite movies depicted a time that was never real. The reality is that with all that is wrong in this country, the best of times for the individual is now. We have Rights as a people and those Rights are defined for us. We have begun to lose the Rights that so much blood and fight earned for us. A Conservative Administration that pandered to the Fundamentalist churches has seen to it that certain of our privacy rights have been taken away, and if we are not vigilant, we shall lose more and more, until we truly are back to the “good old days!.”

Those of us who might be tempted to look at the distortions presented to those that traveled to Washington, please take off the rose colored glasses being offered to you, and look at the world that really was. Was a world without rights for so many really what people want to return to? If this really is the desired outcome of those who want to join the parade and dance to the discordant tunes of the Becks and Palins of this country, then as they follow the false prophets of a tomorrow that will never be because it is based on a past that never was, let these people realize that they are in the vanguard of those who really would kill the American Dream and destroy the Republic itself.

By: The David-Although this day is billed as non-political and pro god, it is very political indeed. The crowd is dressed in everything from conservative clothing to the many wearing their anti-Obama drag and t-shirts.