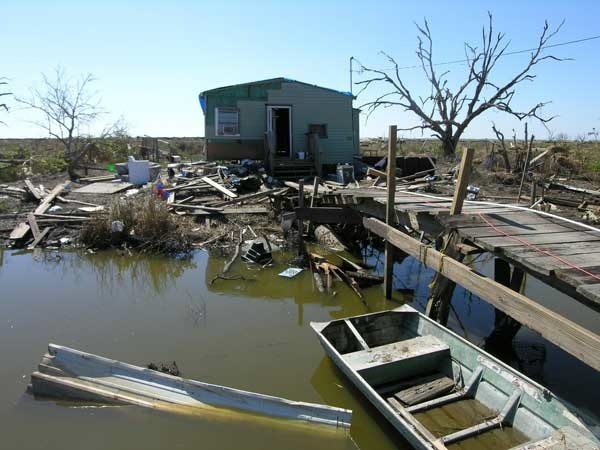 In March of 2006, my son Joe participated in the American Indian Movement’s Sacred Run, traveling from San Francisco to Washington DC on foot — and I joined him for the New Orleans leg of the journey.   He ran.  I drove.

Joe ran through the Ninth Ward and he ran through the bayous.  I drove behind him through both, getting a windshield tour of Katrina’s incredible destruction.  Following along behind Joe in my car, I saw the Katrina damage up close.   “You think the outsides of the houses look bad?” someone in the Ninth Ward told me. “You should see the insides.”

For several nights, the runners and the rest of us camped out in the back yard of the chief of the United Houma Nation, an organization formed by a Native American tribe that has lived in Louisiana’s southern bayous for possibly a thousand years.  Houmas were definitely living in these bayous back in 1682, when French explorer Rene-Robert de La Salle passed through.  Plus I got a “United Houma Nation” T-shirt from the chief herself and now I wear it every single time that I fly in an airplane.   Call me superstitious, but it has definitely brought me good luck — I’ve never crashed yet.  Just as long as I keep wearing my United Houma Nation T-shirt, I’ll be safe! 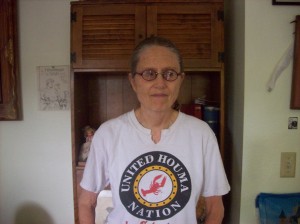 Anyway, after we ran/drove through the Ninth Ward, we then ran/drove through various bayous south of New Orleans and we ended up at the very tip of the bayous, in a small town on Isle de Jean Charles.   This town’s major occupation in 2006 seemed to be trying to think up ways to prevent the Gulf of Mexico from drowning the town.  The main road past the fire station was at sea level already.  I couldn’t imagine what it must have been like here during Katrina.  All the houses were already built on stilts, ten feet off the ground.  What could they do next?  Build their homes 20 feet off the ground and swim to the store when they needed supplies?  Things didn’t look hopeful for Isle de Jean Charles.  Not at all.

“People don’t realize,” said one of the tribal elders I talked with there, “that we are losing more and more of these outer islands every single year.  When I was a child we used to go fishing and crabbing over there, where there used to land.  If I had a nickel for every crab we caught, I’d be rich!   We ate better than any rich man.   Fresh crab for dinner every day.  We were poor but we lived well.  A lot of that land is now under water.   I miss those days.”

As of March 2006, this town at the end of the bayou was just barely holding on.  “During a hurricane, this road is under four or five feet of water.  If you don’t get out before it starts to blow, you just don’t get out.  And being in one of these homes on stilts during a hurricane is like being in a washing machine during the spin cycle.  Levees are being built to protect the nicer homes further inland, but nothing is being done to protect these outer areas — where we were born and raised.” 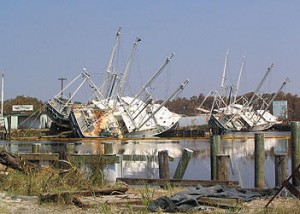 “Are the people living out here mainly Houmas?” I asked.

Then we passed by a straw man hanging from a tree.  Someone had put it up in the aftermath of Katrina.   The sign around its neck read, “Help me!”

I asked the tribal elder about how he saw the future unfolding for Isle de Jean Charles.  “We have several seers in our tribe,” he replied.

“They just tell us to pray.” 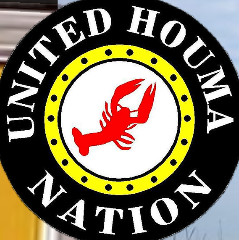 The Houmas of Isle de Jean Charles were just barely holding on to their homes four years ago.  I wonder how hard it is for them to hold onto their homes today, after the huge BP oil spill disaster.   I bet that it’s like holding onto a greased pig.

And the eroding lives of the Houmas in the bayous of Louisiana could also be an analogy for the eroding lives of all Americans today — as inch by inch, town by town, the corporatists and militarists who own my country take over more and more of our land, our wealth and our rights.  Soon we too will be lamenting the loss of our native lands and our traditional lifestyles.

But the Houmas are doing things and organizing and campaigning to try to save what is left of their beloved bayous.  And what are most Americans doing?  They are happily gulping down anti-depressants, watching Fox News and blaming all our troubles on welfare recipients and immigrants — NOT on the corporatists and militarists who are the ones who are actually eroding our lands — and greasing our pigs.

PS:  Speaking of oil, Betty Soskin just sent me a video (http://www.youtube.com/watch?v=qM1syI0UA3Y) on how to solve California’s budget crisis — by getting oil companies who drill here actually start to pay their fair share of taxes, like they do in Texas and Alaska.


Jane Stillwater: “People don’t realize,” said one of the tribal elders, “that we are losing more and more of these outer islands every single year. “