I used to think that if only I could go off to all the hot-spots in the world where American troops or “advisers” are stationed, then I would be able to understand American imperialism better and thus be in a better position to explain to my fellow Americans that, despite all its glittery promises and John-Wayne-style bravado, American imperialism is essentially a BAD thing — one that will come back to bite them in the [bottom].

But after spending many years going to places like Iraq, Palestine, Afghanistan, Myanmar and sub-Saharan Africa, I have finally come to realize that perhaps it is even more important to trace all these imperial catastrophes back to their actual source — the Americans who stand by, do nothing and allow all this [dookie] to happen in the first place.

So I set out to explore and discover the belly of the beast itself — America.  Whew!  That’s a very big job.

Of course we all know that the real heart of America is in Branson, Missouri, but I haven’t been able to afford getting there yet.  But I did go to Detroit, Michigan — and was totally impressed by the courage its residents are showing as they try to pull themselves back from the brink of economic disaster.  You can almost hear the sucking sound there — as the wealth of cities like Detroit gets vacuumed away to desolate places like Iraq, Palestine and Afghanistan, and into the bank vaults of Wall Street.

And my main memory of Las Vegas was of its poor sweet over-worked cocktail waitresses — trying to look sexy when they have sore feet, hungry children at home and almost no chance of seeing sunshine except on their day off.

Then I went to Disneyland.  Can’t get much more American than that.  And in October I’m going to Boucher-con, the famous mystery writers’ and fans’ convention in San Francisco.  And I also went up to Clear Lake last month — which isn’t clear any more.  Nothing but algae.   And I worked as a volunteer film extra in a bunch of Bay Area movies.  That’s American too.

And now I’m going off to Mt. Rushmore.  How American is that!

(Later — much later):  Now I’m here at Mt. Rushmore — after having gotten lost at the San Francisco airport and having almost missed my plane to Rapid City.  But I’m here now.  And it was worth it.  Mt. Rushmore is awesome.   It is HUGE.  And you just gotta love the Black Hills.

I also saw a monument to Chief Crazy Horse today.  It’s about 20 miles away from Mt. Rushmore — but it’s even bigger yet.  Washington, Jefferson, Roosevelt AND Lincoln could easily fit onto just the side of Crazy Horse’s head.  The largest sculpture in the world, it’s been a work in progress for the last 62 years and they figure it will take another 60 years to finish it.  When completed, however, it will take up the space of a whole mountain.

“Where is your land now?” someone had jeered at Chief Crazy Horse after he had fought and then surrendered because his people were being killed by the U.S. military and because the buffalo they needed to live on were also being slaughtered by the occupying forces in order to starve the tribes into submission.  Crazy Horse had begun resisting the U.S. military occupation only after he had been given no other choice. 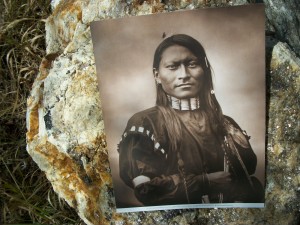 And Crazy Horse answered, “My lands are where my dead lie buried.”

PS:  Speaking of the Afghan money pit and where dead people lie buried, Scottish journalist David Pratt has just written another article about Afghanistan that I think is essential to read if you want to have ANY concept of what’s going on over there right now.

Bush, Cheney, Obama and Petraeus, please take note — especially of the article’s last sentence.  “The third message came from an old Russian friend and former intelligence officer in the Soviet army who served in Afghanistan in the 1980s and who now works as a security adviser there.  It read: “It’s like the rerun of an old movie for me, the same blunders, the same tactical mistakes … but at least we knew when it was time to get out.”

Here’s the article in its entirety, with Pratt’s kind permission (as originally printed in the Glasgow Sunday Herald):
Now civil war looms for the lost cause that is Afghanistan:

We are losing the war in Afghanistan.  It’s as simple as that.  If I were a Taliban or insurgency commander right now, I’d feel pretty upbeat about the way things are going.  While you’d be hard pressed to notice it – given all the papal hullabaloo – Afghanistan faces a crucial parliamentary election tomorrow.

This time around there has been nothing like the political fanfare emanating from Kabul, Washington and London, as happened previously when we were told Afghanistan was taking its first tentative steps towards democracy.  The reasons are simple.  First, the election will be riddled with fraud and corruption.  Secondly, the Taliban will show once again it can strike with comparative impunity.  And, thirdly, those international bodies, such as the United Nations, tasked with helping Afghans realise what free and fair elections actually mean have bottled it and bolted.

Sound familiar?  It should, given that this time last year we faced much the same situation with the presidential vote.  The significant difference on this occasion, however, is that everyone is keeping their political heads beneath the parapet in the certain knowledge that once again we will fail to deliver for the Afghan people and no-one wants to be blamed.

Every day in the news from Afghanistan, in the comments from our military commanders and the evasive doublespeak of our political leaders on troop drawdown and withdrawal, you sense the tide is changing.  And all the time the Taliban are gaining at every turn.  Indeed, the evidence on the ground already shows that, far from being on the back foot, the insurgents are advancing and holding territory in provinces such as Wardak and infiltrating the north of the country in places like Kunduz and Badakshan, turning what until now have been comparatively subdued regions into resurgent battlefronts.  In all, it seems a case of one step forward and two back.

Today, it’s not so much a sense of mission creep as a creeping sense that the mission is lost.  Take tomorrow’s election as a single example.  In the aftermath of last year’s presidential vote, as many as 1.2 million votes were said to be illegal.  In its wake, the UN and others swore they would do better next time.  Yet, according to Johann Kriegler, one of only two foreigners on Afghanistan’s Electoral Complaints Commission, over the next few days we can expect pretty much the same, if not more, widespread ballot rigging and intimidation than before.

And where do we find the UN precisely at the moment we need it most?  Heading for the hills.  Well, not the hills exactly, given that they’re full of Taliban, more a case of over the hills and far away.  Throughout the past week or so, the UN has evacuated what it deems as non-essential staff for fear they might be in harm’s way from Taliban violence during the elections.  In all, that’s about one-third of its entire international workforce in Afghanistan.  Or, to use UN speak, a “reduction in its footprint”.

“We are going to be particularly careful as the Taliban have announced they will attack anyone involved in this election and we are very much involved,” explained Staffan de Mistura, the head of the UN mission in Afghanistan.  Really?  Well, perhaps you’re not quite involved enough, Mr de Mistura.  Why is it every time we put the Afghan people through the rigours of the democratic process, instead of standing its ground, the UN sticks to its wimpish last in, first out approach that has characterised so many of its international missions?

To be fair, though, the UN is not alone in bending to Taliban intimidation: many other international election monitoring groups have also given up on full “observation” missions, rendering tomorrow’s ballot next to useless.  This is bad news at a time when, more than ever, ordinary Afghans need reassurance.

That said, many already sense we have all but thrown in the towel and are doing nothing more than going through the motions of leaving without losing face.  While in the country last month, almost every Afghan I spoke with, from Badakshan in the north, to the capital, Kabul, was desperately pessimistic about the future.

Already people across the country have picked up on our own faltering sense of political purpose, and are psychologically steeling themselves for what is almost universally accepted as the coming civil war once we’ve packed our kit bags and left.  And we’re not simply talking about the Taliban here.

Around Kabul’s more “fashionable” neighbourhoods, extravagant new houses built on the enormous profits of the illegal drug trade are testimony to the financial and political power of war lords who run private militias and “security companies”.  It is these often bitter rivals, not just the Taliban, that ordinary Afghans believe will plunge them back to the dark days of the 1990s when civil war laid waste to much of Kabul and paved the way for the rise of the Islamic extremists.

Having been there many times during those anarchic years, listening to Afghans today draw parallels with those times, I well appreciate their fears.

General Carter has every reason to be worried, given that it’s probably fair to say much of the country, whether under government or Taliban control, is threatened by a similar incendiary brew.

They say that the devil is in the detail.  If that’s true, then perhaps the detail in three email messages I received over the course of the past few weeks gives some intimate sense of the prevailing attitudes to the war in Afghanistan and where the country might be going in the future.

The first was from a US Army helicopter ambulance pilot, whose unit I spent time with in the country.  As his deployment comes to an end, he told me of the physical and emotional toll the war has taken on him and his comrades, and how much he now just wanted to go home and never see Afghanistan again.  The second email was from a young Afghan woman, who described how men with guns – not Taliban – are terrorising the neighbourhood in Kabul where she lives.   The third message came from an old Russian friend and former intelligence officer in the Soviet army who served in Afghanistan in the 1980s and who now works as a security adviser there.  It read: “It’s like the rerun of an old movie for me, the same blunders, the same tactical mistakes … but at least we knew when it was time to get out.”

By: Jane Stillwater- American imperialism is essentially a BAD thing — one that will come back to bite them in the [bottom].