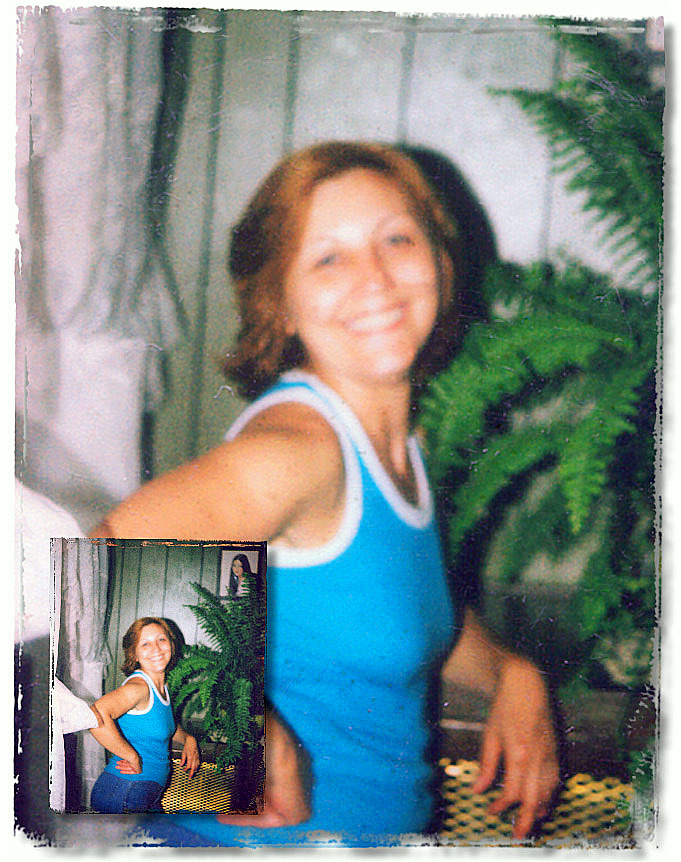 My mother never left my side even when all others had forsaken me. She was always there, no matter what, and though I broke her countless times, her love was the one constant in my life. As a person, she modeled courage, determination, and a lust for life for life I have rarely encountered. This is not to say my mother was a saint — she was far from it! She was (and still is) impulsive, stubborn, and willful. My mother led an essentially hilarious life with her children in tow. This story is just one of many. Sorry, Moms, this one had to be told.

We were all crying because the bad men were going to take the TV away.

There was little else in that living room, I don’t think there was even a couch. We would sit on the plastic covered kitchen chairs to watch TV. And that’s what we were doing when these two strange men came into the room and started taking the TV away. I couldn’t have been more than five and my two sisters Darlene and Yvette were 3 and 2 respectively.

These two big bad men were taking the TV away.

There were two things I remember most about that Lower East Side five-story walk-up apartment. One was that the bathtub was in the kitchen which made for funny situations during dinner time. The other was that it had this long, narrow hallway. So long, in fact, that I used it to ride a tricycle up and down its length. My mother was obsessively clean and the worn linoleum would gleam with floor wax and we would take a running start in our socks and slide across that long hallway.

But most of my memories of that apartment weren’t so good because it was the first time I would remember my father not being around. And when my father wasn’t around, things were hard for my mother and we had less to eat, less furniture.

But we had this nice, brand new TV and these strange men were getting ready to take it away, so I cried, and my sisters followed suit. And my mother was standing there, not knowing what to do.

Then she started arguing with these men. At first it was more of a plea. She was actually begging these men not to take the TV away. You see, the TV was bought on the ghetto “lay-away” plan which was actually a scam to rip off those who had nothing to rip off in the first place. You would put an item on “lay-away” and that would allow you to take it home. You paid for the item in weekly installments. The thing was that the weekly installments often added up to more than twice the sticker price. In fact, most of what you got on “lay-away” was used — items that were taken away from other families who had failed to pay the weekly installment.

Aside from the long, narrow hallway, it was the only form of entertainment we had.

Soon, my mother was engaged in an all-out argument with the men, who seemed to care less and weren’t even paying attention to my mother. You have to understand my mother is a petite woman who barely measures five feet tall — not an imposing physical presence. So the men were ignoring my mother which made her more pissed off, which made us cry more.

“You can’t do this!” My mother yelled.

And everything stopped. We stopped crying because we knew that tone of voice. We had heard that tone many, many times before and it usually meant someone was going to get their ass kicked. So we stopped crying, perhaps hoping it wasn’t one of us. The men stopped because it was a defiant, authoritative voice. I guess they were used to taking orders and my mother had just barked one out that would’ve made a marine drill sergeant proud.

The pause lasted a split second and the men continued preparing to take the TV and we got back to crying, knowing that it wasn’t one of us that was going to get our asses beat down.

I remember my mother tried pleading one more time to no avail and then I got really scared because when I glanced over to her, she had The Look. I can’t ever sufficiently describe The Look. It was the look of death and it actually made my mother look taller, more powerful, but these guys just weren’t getting it, but we knew. We knew some shit was about to jump off. I felt so bad, I almost warned the men, but, having learned even at that early age that discretion is the better part of valor, I chose to stay quiet.

My mother, seemingly defeated and frustrated, left the room…

And when she came back, she had the largest knife she owned in her hands. It was the same knife used for special occasions for cutting a pernil (roast suckling) or something like that, and she had this wild-eyed look in her eyes. I swear her hair was standing up!

“You will take that TV over my dead body! My children are not going to suffer.” and with that, she yelled her death roar and made her charge, willing to die.

Now, I was really scared because I feared for my mother’s safety. My mother was small and petite and she was a woman. Surely she wasn’t a match for these two big idiots who didn’t even know better to leave. The men, who had until then been ignoring my mother, freaked out when they saw my mother charging them with this huge knife in her hand. They tried to calm her down, but it was too late, I could’ve told them that. She went after them and the funniest thing happened:

The men started to run!

Or rather, they tried to run, but my mother had them pinned down, slashing at them with her knife and she meant to cut them. Through some miracle, they managed to elude my mother’s slashes and make it out the living room into that long hallway, whereupon they slipped and slid through the length of that recently waxed and gleaming long expanse. Somehow they managed to make it out of the apartment, though my mother almost managed to stab the unfortunate one who slipped and fell.

But that wasn’t enough for her. My mother chased those men down five flights of stairs and down the street where they had their truck parked. They almost didn’t make it. By then my mother had ripped open her blouse and was yelling, “Rape! Rape!” at the top of her lungs which caused all the unemployed Puerto Ricans who happened to be hanging out on the street corner that fine summer day to join in on the chase of these two poor men. I know this because I was running behind my mother the whole time. I’m her oldest, after all.

They jumped in the truck making their final escape in a squeal of tires and a cloud of dust, never to be seen again, a mob of oppressed and frustrated Puerto Ricans on their tail.

There we were in the middle of the street, my mother with a knife in her hand, clutching her blouse closed. She looked at me and said, “C’mon, let’s go home.” Somehow, I remember, my mother managed to look regal, her head held high, and no one dared say a word to her…

And that’s what we did; we went home up five flights to that sad almost empty apartment. She put the TV back, plugged it in and told us that we could watch as much TV as we wanted and that no one would ever take our TV away. She left and got some overpriced, stale meat and other things on credit from the corner bodega. It is said that Cuba, the proprietor notorious for refusing credit to his own mother once, took one look at my mother and decided that was not best time to mention her credit was stretched too far. Later she cooked us dinner, with a Blackout Special as a treat.

And we were so happy.

That was the kind of mother she was: ferocious, fiercely protective of her children. Later in life, it was her power of example that maintained me and taught me never to give up when the odds seemed insurmountable. It was also her fierce love that nurtured and protected me, serving as beacon to a path for becoming a better man. I believe that if I were to carry my mother on my back for the rest of her life, I still could never repay her…

I love you, moms.

Edward-Yemíl Rosario: My mother was small and petite and she was a woman. Surely she wasn’t a match for these two big idiots who didn’t even know better to leave.