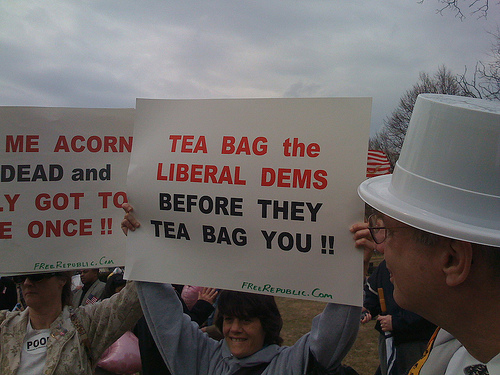 The Tea Party members, known as “teabbaggers” by their opposition, fear illegal immigrants taking their jobs.  The Tea Party express cross-country tour is kicking off in Searchlight, Nevada this weekend.  They have a stated goal to “kick Harry (Reid) of of the Senate” in the November mid-term elections.

While watching Tea Party protests, numerous complaints can be heard which demand that we build a wall between the United States and Mexico. Their members want to keep the borders secure against illegal immigrants. They don’t seem to have quite the level of resentment toward Canadians, but most Canadians are Caucasian, which mirrors their demographic.

“Please sign up below to show your support for the Tea Party events on April 15-17, 2010 and your opposition to illegal immigration or Amnesty for illegal aliens.“

They claim that eighty percent of Americans share their opposition to illegal immigration.

The Arizona Tea Party is in support of the recently signed Arizona law that would require people to show their birth certificate to police should the police suspect that they might be an illegal alien. This is ironic because Tea Party members consistently speak out against Communism and comment that President Obama is a Nazi for pushing the health care bill through. One of the biggest selling points to the “Red Scare” was that Russian people were required to show a passport when a police official inquired of them. They have made Arizona look more like Communist Russia or Nazi Germany themselves by pushing for this bill. 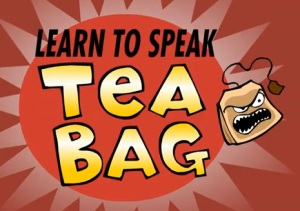 To the Tea Party, President Obama is a Communist, Muslim, Kenyan, Manchurian candidate, Fascist, Socialist, Marxist who wants to take away their rights by passing health care reform and by… banning fishing. Tea Party “celebrity” spokeswoman Victoria Jackson flatly told a flummoxed Fox News host, “The president’s a communist.” She has said that Obama “bears traits that resemble the anti-Christ” and shares “so many similar qualities” with Adolf Hitler She also says that when she was on O’Reilly and she said that President Obama was a Communist she got a lot of hate mail, but got some that said she was a prescient which means “a prophet.”

The Tea Party fears the penalty for not complying with Obama’s new policies is being thrown into a prison camp. They accuse him of tyranny because their side lost the health care vote and have designated themselves as an army to wipe out tyranny. They completely ignore the fact that it was the Bush Administration who contracted Halliburton to build the prison camps.

Regarding the recent Arizona bill, The New York Times states,

“It requires police officers, ‘when practicable,’ to detain people they reasonably suspect are in the country without authorization and to verify their status with federal officials, unless doing so would hinder an investigation or emergency medical treatment.
It also makes it a state crime — a misdemeanor — to not carry immigration papers. In addition, it allows people to sue local government or agencies if they believe federal or state immigration law is not being enforced.”

Many of the Tea Partiers like to quote Ronald Reagan, a demagogue and their idol, and indicate that they hold the late former president in high esteem. What many of them do not seem to remember is that their historic idol was against walls which separated people, considering them a barrier to freedom. The Tea Party Store lists these Reagan quotes,

“Government’s first duty is to protect the people, not run their lives.”

“Concentrated power has always been the enemy of Liberty.”

“Freedom is never more than one generation away from extinction. We didn’t pass it to our children in the bloodstream. It must be fought for, protected, and handed on for them to do the same.”

“Man is not free unless government is limited.”

“I know in my heart that man is good. That what is right will always eventually triumph. And there’s purpose and worth to each and every life.”

They fail, however, to recognize that Ronald Reagan was responsible for tearing down a wall such as the one which they desire to build.

In Berlin on June 12, 1987, President Reagan made his speech at the Brandenburg Gate at 2 PM, in front of two panes of bulletproof glass protecting him from potential snipers in East Berlin, Regan gave his now famous, historical speech. About 45,000 people were in attendance, including the West German president Richard von Weizacker, Chancellor Helmut Kohl, and West Berlin mayor Eberhard Diepgen. That afternoon, Reagan said,

“As long as this gate is closed, as long as this scar of a wall is permitted to stand, it is not the German question alone that remains open, but the question of freedom for all mankind …

President Reagan was of the opinion that the Berlin Wall was a detriment to the cause of freedom and would not have been in support of building a wall between the United States and Mexico if he remained consistent with his statement at the Brandenburg Gate. What would happen to their border wall if Reagan were in office?

“Congress shall make no law respecting an establishment of religion, or prohibiting the free exercise thereof; or abridging the freedom of speech, or of the press; or the right of the people peaceably to assemble, and to petition the Government for a redress of grievances.“

In Mein Kampf, Adolph Hitler is quoted as saying,
.”..for a people’s liberation from a great oppression, or for the elimination of a bitter distress, or for the satisfaction of its soul, restless because it has grown insecure – Fate someday bestows upon it the man endowed for this purpose who finally brings the long yearned-for fulfillment.”

The Tea Party has manufactured a great oppression that exists in their minds alone. Its members and in part Fox News have whipped up bitter distress because of their emptiness of spirit. They are restless to act against this perceived oppression painting President Obama as the source of all the evil they fear. The Republicans’ Newt Gingrich has encouraged this and named them their “Militant Right,” saying that they are “more likely to end up as the militant wing of the Republican Party” than as an independent or third party.” Gingrich also tweeted, “The left may think that being militant that we not bury our children and grandchildren in debt is a bad thing. I don’t.”
Tea Party members frequently spout hate and fear of perceived Communism, Socialism, Marxism, and Nazism, yet they espouse and display the very characteristics they claim to fear. If these members would take a close look at themselves, they might say, “I looked at the enemy and it was I.” Will the Tea Party end up changing the United States into something resembling Stalin’s Russia or Hitler’s Germany, the very things they claim to protest against? 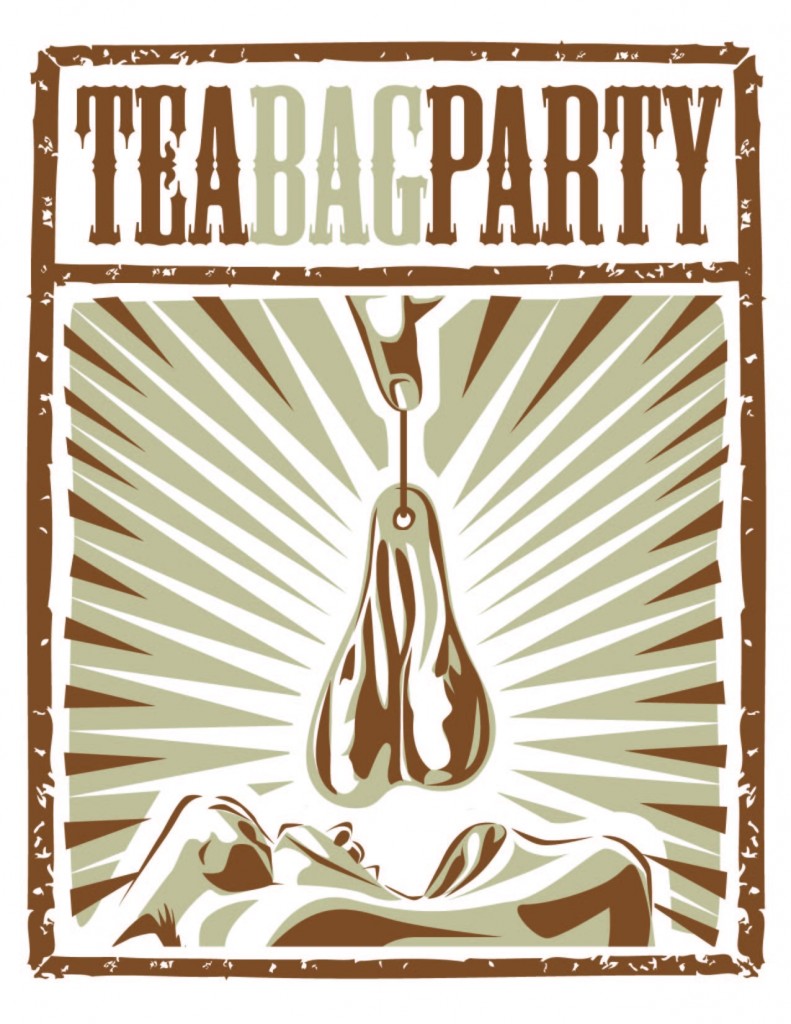 By: SpaceEagle-The Tea Party express cross-country tour is kicking off in Searchlight, Nevada this weekend, and they’re on a mission to Teabag a nation.