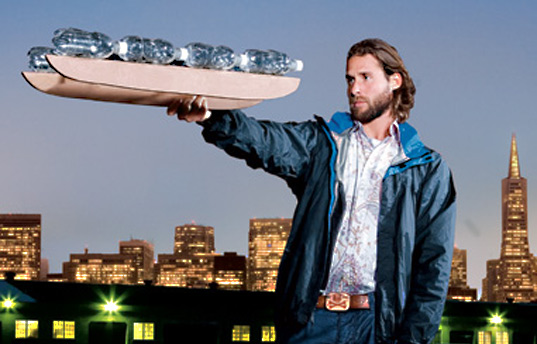 Our story begins at The Great Pacific Garbage Patch.  An area of water larger the size of Texas, where all the plastic detritus of our daily lives ends up; some estimations have it larger than the state of Texas, it’s hard to measure due to the fact that it is too deep to measure and the detritus is too small to get an accurate measurement.    It is pulled there by the ocean currents, and there it stays.   Things like water bottles, plastic toys from Happy Meals, six pack loops, and countless plastic garbage washed off of boats during storms or from mere carelessness.

This gyre of marine litter in the central North Pacific Ocean located roughly between 135° to 155°W and 35° to 42°N. was predicted by oceanographers far in advance of its discovery; however it was discovered by Charles J. Moore, returning home through the North Pacific Gyre after competing in the Transpac sailing race in 1997. He was so gobsmacked by the sheer mass of it that he has now made it his life work to educate the public about it. He has written a book, participated in documentaries, gone on lecture circuit and been instrumental in bringing the result of our waste to our attention.

While this has been widely covered, this story is not about the findings in the Great Pacific Garbage Patch, it is about another man’s quest to cash in on his 15 min of fame due to the Patch.

David de Rothschild captain of the Plastiki also has a mission.  His dream; to teach us all about waste by building a ship out of plastic bottles and sailing it in the name of cleaning up the ocean. The sailing vessel made up of 12,000 bottles set sail from Sausalito on Saturday March 20th, with the goal to sail to Australia.  Scheduled are stops Hawaii, Tuvalu and Fiji on its way to Sydney, a trip estimated to take more than 100 days.

While on the surface this may seem like a noble cause, putting all those plastic bottles to use, it raises some environmental concerns of its own.

One of the things  Charles J. Moore  is very adamant about is we need to get back to using long lasting materials like glass and metals that do not deteriorate and hence can be re-used, rather than throw away goods.

In my mind this is a very good idea.  For one thing, anyone who has ever gone beach combing knows that glass lost at sea comes back to us beautiful, almost a treasure.  It is also incidentally made from sand, the same thing you find on the beach.  It doesn’t break down and release chemicals into the ocean disrupting marine life.

This chemical break down is one of the big problems with our plastic, almost island.  It steals oxygen from the water and poisons both animal and plant.  On a recent trip to Monterey Bay Aquarium I had the opportunity to sit with a researcher and ask in what ways our waste is affecting the Monterey Bay.  What I was told was that while some things such as wood and tires provide homes for marine life.  They have been noting a problem with shell mollusks.  They are unable to build their shells due to the lack of calcium.  Hence they have noticed a dropping off in the population of shellfish.

The Plastiki, this vessel boasts a hull of recycled plastic water and soda bottles, the vessel is made of a hardened plastic called PET. It is designed to make its own electricity using solar and the plastic bottles are shored up with carbon dioxide from dry ice which is then resealed before being used in construction.

Now, carbon dioxide itself is somewhat of a problem for the environment.  It helps create a greenhouse effect.  On the flip side plants use it for food and recycle it into clean air for us.  However there are fewer plants at sea and they are all on the bottom.  Rothschild’s answer for this, build a garden on his boat. According to Rothschild only an estimated 10% new materials were used in the design of the boat.

Rothschild states “We could potentially put together a boat that costs a fraction of what normal conventional boats are made of,” he said. “The idea is to take the Plastiki, break it down [after the voyage], and put it back into the system. So, it may come out being a jacket, a bag, and more bottles. It’s infinitely recyclable.”

The ultimate goal of the Plastiki voyage is not just to encourage people to embrace clean, renewable energy but also to see consumer waste as a potential resource.

That’s what this is all about — showcasing cradle-to-cradle products rather than cradle-to-grave,” de Rothschild said.

He also plans to compost all their waste and use an incinerating toilet.  If all this sounds like a bomb waiting to go off, that’s because it is.

One of the glaring problems with an endeavour of this kind is it tends to enable human beings in their use of disposable goods.  It gives us permission to continue using plastic in this way instead of turning to more durable options.  After all, our nicely packaged water bottles could become an ultra cool boat.  Right?

Rothschild is not alone in his publicity stunt using garbage; of late it has become incredibly hip to build things out of waste.  Mock up Mayan Temples, sculptures, even in some super silly cases homes.

While all of this is good fun, one can’t help but wonder why aren’t we talking about eliminating waste?  That’s the ideal that Charles J. Moore is presenting and I think it is a better one.  Buy quality items that will last, things we don’t have to throw away.  Rather than looking at “cradle to cradle” as Rothschild would have us do, we should be looking at generation to generation.  Stop being as concerned about disposability and start being concerned about the sustainability of our Big Blue Marble.

So You Think Easter is an Innocent Holiday