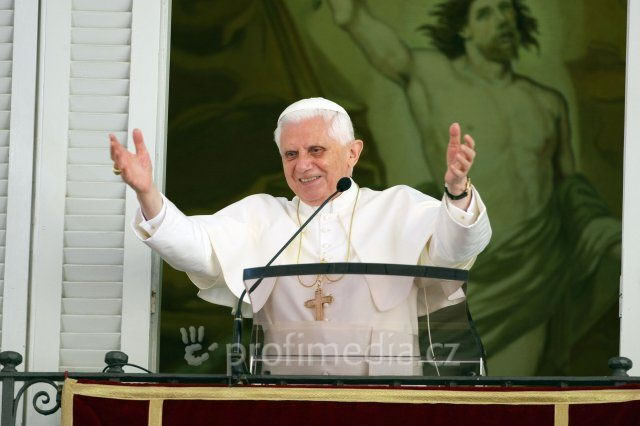 “The wrath of God is a way of saying that I have been living in a way that is contrary to the love that is God. Anyone who begins to live and grow away from God, who lives away from what is good, is turning his life toward wrath.”
“Not all moral issues have the same moral weight as abortion and euthanasia. There may be legitimate diversity of opinion even among Catholics about waging war and applying the death penalty, but not… with regard to abortion and euthanasia.” ( my words.. or pedophilia? Seems to be a little selectivity being practiced by the good Cardinal, or possibly a self-serving statement!)
“Above all, we must have great respect for these people who also suffer and who want to find their own way of correct living. On the other hand, to create a legal form of a kind of homosexual marriage, in reality, does not help these people.”

The above are three famous quotes. The words were uttered by Pope Benedict XVI either in his current identity or when he was Cardinal Joseph Ratzinger. As Cardinal, he had the ear of Pope John Paul II as prefect of the Congregation for the Doctrine of the Faith from 1981 until his elevation to the Papacy.

Cardinal Ratzinger was known to be a stern, conservative interpreter of Catholic Doctrine. He wielded his power seemingly without compassion or mercy for those who he believed offended his moral sensibilities. He has, throughout his career, taken a firm stance and a very hard line against homosexuality and the homosexual man and woman. He has been so lacking in understanding toward the gay person that he has effectively closed them out from the church itself.

The homosexual has also been demonized during the years of the Cardinal’s tenure as prefect: When the scandal relating to the pedophiliac and predatory behavior of Roman Catholic clergy, the church took the position that the acts were being committed by a minority of priests who were homosexual and should have been weeded out before they took Holy Orders. There followed a well publicized purge in which anyone suspected of homosexuality, whether inclined toward it or actively living a gay life, was expelled from the seminary.

The explanation for this action was no more than a public relations move by the Church to shift the blame on an already marginalized minority. It was an attempt to shift its sins onto a group who much of society was all too willing to believe was responsible. Imagine that, gay priests… how horrible…. when most of us know that there have been gay priests from time immemorial.

Besides…. most of us also know that pedophilia is something that is no more attributable to gay people than it is to straight people as a group. The pedophile, whether a member of the clergy or the laity, suffers from a disorder of his own. The attraction to prepubescent children is not determined by one’s attraction to their own or to the opposite sex.
It is a problem of and to itself.

Much has been written as to why this outbreak of horror has hit so many of the children of the church. First it was thought to be peculiar to the church in the United States, but now it is known to be a universal problem not at all reduced by the church’s homosexual purge of a few years back.

Indeed, an even more serious situation has occurred that taints the present occupier of the Chair of Peter.

The new problem for the Vatican is what appears to be documented evidence that Benedict knew of incidences of child molestation and attempted “for the good of the Church,” to cover them up and use the tried and true (?) remedy used by Cardinals from Boston to Rome. That remedy? Instead of seeing that the perpetrator was brought to justice, the choice is to transfer him to another diocese where he is free to find new victims. It is an unconscionable choice, a choice without moral foundation. It makes Benedict’s words in the first quote above ring hollow and take on the aura of a cynical attempt to dupe the faithful of his church.

The Vatican is spinning the latest occurrences to be about the press spreading what is no more than malicious gossip. That is too easy an answer. The hierarchy needs to address this problem openly and with honesty. Blame needs to be taken and the church needs to examine its own conscience as to its sins and how those sins can be expiated. To say this is all a matter of malicious gossip is to minimize the pain and suffering of every victim who has suffered sexual abuse at the hands of the clergy of any faith, and of those who have suffered corporal abuse at the hands of those in charge of religious schools or choirs… those such as the Pope’s own brother.

Before one can be a moral authority, one must first be moral. In any event, it may be simply justice, or possibly karma that will see that Benedict’s papacy will not be a jubilant one.