Toys for Tots-or-The Dance of the Christian Toys 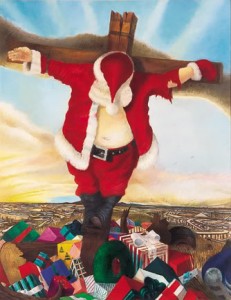 I arrived at my designated Toys For Tots location a little after 7 PM, my scheduled time. It was dark out, and the huge converted mini-mall that was now a church was lit up. Turn signal making its clicking noise, I turned into the parking lot.

Over 7,000 families were attending this one event, which explained the need to separate people into groups and times; due to the high levels of unemployment and today’s terrible economy, we were vying for spots and the crush of humanity was dense. After turning my key in the ignition and hearing my car die, I hopped out of the driver’s-side door and headed toward the warehouse-like building. On the way I passed a woman screeching at the top of her lungs about being cut off in the line of traffic waiting for parking spots.

Really? I asked myself silently. You just received free toys from a church out of the charity of someone’s heart, and you feel you need to cuss someone out about parking?

I stood literally hat-in-hand as I came into the hall, embarrassed and ashamed of my need, but grateful to be receiving presents for my children, the wonderful bright stars that light up even the darkest times in my life. We were pressed into a giant concrete-floored hall. Signs hung above to help direct the bumpy roll of foot traffic. Children cried, screamed, or played, people talked, and somewhere far ahead a microphone blared.

Little did I know, this was the start of an evening of torture.

First, a pre-holiday show in front of what looked to be strung-up garbage bags. Trivia questions resulted in extra prizes being given to children, which was sweet, but in all the flow of noise, the exhaustion, the hunger of the late hour, faces looked more annoyed than grateful. This pre-holiday jitter went on for at least a half an hour.

Then we were shepherded into an auditorium, where at least we could sit down. I rested my aching back in the hard fold-out chair, admiring the amount of time, money, and attention that had gone into this production: even while we were waiting for the event to start, cartoon numbers counted down the moments to the show on large flat-screens, and camera crews were scattered everywhere.

I realized, of course, that part and parcel of receiving gifts for my children would be listening to what the church had to say. After all, in their minds, if they could bring over even one hungry soul to Jesus, they had done a good thing. I understand that. I grasped that my repayment for people’s kind charity was to listen to The True Meaning of Christmas. I have no problem with that–after all, if you celebrate Christ’s Mass (which I don’t), then you believe it is about the birth of Jesus, and this is your time to celebrate a wonderful miracle.

Bu this was so much more than I had reckoned for.

First, a blaring rap declared the chorus’ belief. This pounded into my head and down my spine for longer than I’d like to count. Then a skit that lasted at least 20 minutes was about nothing but a snowball fight that resulted….in the very long, drawn-out end…in the kids declaring peace and becoming friends. I cannot even remember–perhaps I have repressed the memories–of all the Jesus Tap Dance scenarios, but I do remember the children being rather frighteningly separated out from the parents more than once: first, to listen to preachers speak, and second, to go to their designated waiting areas completely away from their parents. I suddenly became glad, for the first time that night, that a volunteer had messed up and told me not to bring my children.

At long last two separate preachers came out, each of which had to speak to us for at least 15 minutes. At this point I had not eaten in twelve hours, and a terrible migraine was kicking in. I looked at the parents all around me, many of whom had tiny babies falling asleep over their shoulders, and I wondered how they felt about being kept prisoner long past their children’s bedtimes.

The first preacher spoke about the miracles of Jesus, and I have to tell you that at this point the Jim-Jones-style showmanship was getting on my nerves. When he declared that “no one before, ever, in all the history of time, has ever risen from the dead but Jesus,” I really had to wonder if he’d never heard of comparative religions, read Joseph Campbell, or heard of Osiris. Lots of gods were killed and came back from the dead. It’s a standard of religious mysteries.

To my mind you see, it wasn’t a “miracle” that three days later the tomb was empty: either someone did a little grave robbing, or the disciples, who knew the jig was up, hid the corpse. They claimed he had appeared to them, despite the fact he appeared to none of the government officials who could exonerate him or give testimony to the truth of this miracle.

You get a sense of the mood I was in by now.

And just as I wondered who on earth could fall for such ridiculous schmaltz, voices in the audience screeched, AMEN!

The power of groupthink at work.

Next, to make things worse, the second preacher came forward and began talking of sin, claiming that we parents should know all children are born sinners.

Tell me that to my face, and you’ll walk away with a black eye.

I have spent 2 years with my daughter and 10 with my son, and have yet to see them commit a single sin. This preacher claimed that children’s urge to say “me, me, me.” is a sin. Are you kidding me? Children are born needing care, and don’t know how to ask. We adults must provide it. It is our duty, but also our privilege. I am honored to take care of my innocent, sin-free, natural, curious, wonderful, selfless children.

And even though I was starved by the end of the Tap Dance Show and they at last offered Kool Aid and popcorn, I dared not touch their snacks. I was afraid Jim Jones served on the refreshment committee.

But, at long last, the time came to be ushered into the gift room, and I must admit that the gifts were tremendously nice. Parents were allowed to choose gifts, thus allowing for the most likely present to please the individual children, which I thought was very kind. I was pleased by the choices, and happy to see some of the “trivia winners” carrying off brand-new bicycles.

In the end, to ME, Christmas is about children. It is about their innocence. One of the things the Christians really did right was focus on the “Baby Jesus”–after all, who can hate a baby? Everyone loves an innocent child, and a nativity story. It is sweet, absent of all affectation.

For me, Christmas is all about my children. It is a time to tell them I love them, care for them and appreciate their small troubles and hardships. And I do love that the charity of good hearts offered gifts to children in need. In the end, despite the two-hour program that thudded pain through my head, gut and spine, I continued to feel the gratitude I had when I began. The people thronging the halls with nametags were volunteers, every bit as exhausted as the rest of us, unpaid, and doing what they could to help others. This spirit, I do appreciate. Genuine belief, held deep inside of oneself that makes one do the right thing for one’s fellow man–and children–is something I will always value.

By: Savannah Thorne
One woman’s experience at being held hostage in order to recieve charity. Should those administering for a charity require recipients to listen to their message or should charity be freely given? Read and discuss.