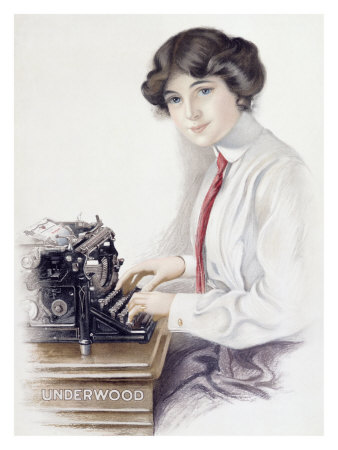 By: Grainne Rhuad and Karla Fetrow

One could say that I was born with journalism in my blood.  My Grandmother got her degree at Oregon State in journalism and at a time when most women got married and started families, she went landed a job at the Sacramento Bee right out of school doing the society pages.  It may seem like a frivolous thing given the way society pages are run nowadays, but at the time it was an important part of the war effort, keeping people abreast of charitable causes and boosting moral.

When she started out her career, she had to take all her notes in shorthand, there were no tape recorders or any other modern conveniences.  She also wrote everything out ahead of time and when it was perfected typed it up on her trusty Underwood.  Mistakes were studiously avoided because erasing meant using an actual eraser which really did not work very well.  I remember her telling me how excited she was at the invention of things like eraser tape and white out.

When I started writing in college about 50 years later, it was using my grandmother’s hand-me-down electric typewriter.  She had just upgraded to a word processor and I got the typewriter as a graduation gift.  There were of course computers by this time, but I was a strapped single parent going to college so I used what I had.  I often jokingly tell people that I may be the last person who graduated from college (1995) solely using a typewriter.  My teachers hated it; it was not as uniform and pretty as the computer generated papers they got from everyone else.  I however took a certain perverse pleasure in turning in those papers.  It allowed me to develop excellent arguing skills with professors and administrators who tried to tell me they wouldn’t accept a typewritten paper.  Socioeconomical prejudice was something they obviously needed to learn about.  I did not ever use a computer until I married into one the summer after I graduated.

I did not begin to write for a long time.  Very often when making up stories verbally I was told I should, write them but oral tradition was something I valued.  It was how I had learned most of what I needed to start me on my path.  However a well placed question by an individual about survival both spiritual and psychological gave me the nudge that made me sit down and write.  The question was this: “How do you teach this skill that you have to others who need it but don’t know how to get it?”  My mind immediately went to stories which I began with.  I never dreamed it would also lead to alternative news coverage and opinions.  But ultimately makes perfect sense, we are sharing with our readers what we know and in addition inviting you to share with us.

When I joined this Online Magazine a little over a year ago, it was still in its nascent stages, using the tried and true Underwood for its angst. The base staff was still creating the bulk of its production. Our quest was sincere; to find other writers who would like to exercise their craft beyond the media of blogs and publishing sites that catered to a mainstream readership. Writers, perhaps by the very nature of their personality make-up, are constantly in revolt; constantly searching for what is fresh, new and creative. Our job was to find the warriors of the writer’s revolution.

We all owe much to the creativity and resourcefulness of Stacy, who first brainstormed the idea and put together the site. Maya added a widening viewpoint from her own cultural orientation, adding to the dynamics of polar complexities and Karla from the far north providing her patience experience and insight.   Here was a meeting of the north, south, east and west and we were eager to fill in the circle.  I having taken a challenge from another, now less active administrator to write an article had no idea how much a part of my life this ‘Zine was going to become.  It was however easy to see from the beginning the huge potential this ‘Zine and her creators had to be something great.

Great thought, passion and work were put into the development and direction of Subversify, from the name down to who is involved.  In the last year excitingly enough Subversify has taken off. That’s right, completely bypassed correction tape and electric typewriters and moved into the eyesight of the rest of the web.    Many of the changes in format over recent months have been due to Mitchell Warren, who took over as administrator when Stacy was no longer able to put in the time for keeping the site functioning. Mitch pitched the e ‘Zine to Google which added it to its news search engine. Amazon developed a fondness for including well documented articles in its engines. Karla Fetrow has been an indispensible editor, making decisions when nobody else wants to as well as truly fostering creativity in all of our writers.  All of our staff and contributors have grown thanks to her encouragement and suggestions. I am told one of the wisest decisions made on part of the staff was to add myself to our struggling endeavors. A load is so much easier when with cooperation and that is certainly the main ideal we all share. Bringing a sparkling west coast perspective with me and some well honed organizational abilities, ideas, diplomacy and public encouragement has greatly enriched our site. (So I am led to believe)

We have this year added such writers as Neonorth and A.B. Thomas who paint Canada from its most colorful perspective, The David, who pounds each piece home like a carpenter putting together the framework for a house, and Astra Navigo, whose energetic style and rich explorations into the truthfulness of belief systems, internal politics and social ills add texture to Subversify pages.   We feel like we have a very strong crew of regular contributors and it is this base that really is the secret of our success.  Most recently Bill The Butcher has joined us bringing in a more global perspective.  Of course we owe a lot to our returning contributors and friends of Subversify like Savannah Thorne who takes time out from her fiction writing to contribute Dharmacharya Gurudas Śunyatananda who has provided spiritual pieces Jane Stillwater who provides us with foreign correspondence and Raven who is very new to us but we hope we will be seeing more of.  We are beginning to generate more interest in submissions than previously which is exciting.

In the coming year we have exciting things planned, like expanding on our foreign reporting providing  more International flavors now that we are seeing a rise in interest in our foreign readers, and moving our fiction into a prominent department to round out our offerings.

Like old Underwood there are parts of our beginnings that we love so very much but it is time for a growth spurt at Subversify.  In the coming months expect to see a change in some of the formatting, Subversify is due for a make-over and we have been hard at work behind the scenes trying out our new look. Also look for expansion in our store and we would love for our “Ask Subversify” section to expand, but that depends on you, the readers.

Most of all we wish to thank you our loyal readers who have joined us in this endeavor.  Who weekly join us in conversation and who question with real intent our articles, keeping us honest and on our toes.  To you we tip our hats.

By: Grainne Rhuad and Karla Fetrow
Subversify had come a long way since its beginnings. We have exciting things planned for the coming year and much love to dole out to our readers!

Toys for Tots-or-The Dance of the Christian Toys