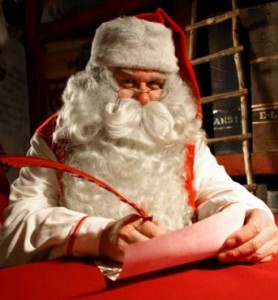 It seemed this year that Santa Claus had been fired.  Perhaps he hadn’t been doing his job well enough.  A second straight year of lower than expected retails are keeping merchants on edge,  and possibly looking for a better middle man to peddle their wares.  The US Post Office says it’s a privacy matter.  Apparently a Santa Claus facility last year had a sex offender working for it, and there is concern that among the thousands of letters sent to North Pole, Alaska each Christmas season, a sex offender might choose one for invading a little privacy.  It turned out this facility wasn’t located any where near the North Pole, but in Maryland, yet with typical one-size-fits- federal decision making, North Poles jolly populace were added to the list of suspicious characters.

The voluntary elves working at North Pole, along with the general public were so upset by the Postal Service decision to no longer send letters marked “North Pole” or “Santa Claus” automatically to the tiny Alaskan town, that Senator Lisa Murkowski stepped in to assure Alaskans Santa Claus would not be shut down, just managed under a little closer supervision.

I was never truly a fan of Santa Claus.  All of my early childhood pictures showed a crying toddler on his lap.  It wasn’t until the year my father played the community Santa that I began to see the big picture.  I approached the loudly dressed stranger with my usual reluctance, squabbling over the idea of sitting on his lap, when I glimpsed the eyes barely peaking through the thick white brows and beard.  I realized they were my father’s, amused with having a role to play and that this was all a game.  A game everyone liked to play.

Sometimes my parents were a bit extravagant with their Santa game; one year they even got a neighbor’s reindeer to prance around in the fresh white snow awhile, leaving foot prints, then put the creature on the roof top so there would be prints up there as well.  The radio station liked to announce when they saw a “mysterious flying object twinkling with red lights”.  A quick check at the window would show a colorful object flying overhead that sounded mysteriously like a helicopter, although decked out with more colored lights than Macy’s Department Store.  We knew it was a fairy tale, but Santa Claus was our own private Disneyland.

The first letter I ever composed, I wrote to Santa Claus.  As much as I knew Santa Claus was a game, I also knew there was a real North Pole.  I had been there.  It wasn’t very impressive at the time; just a handful of people; but it did have a small store with two large, plywood candy canes out front and the open friendliness typical of so many wilderness towns.

I don’t know when the settlement first chose the name “North Pole”, as it isn’t true polar north, but about ten miles north of Fairbanks.  It was probably the whimsy of some early gold miners.  Shortly after North Pole made the federal index of towns registered in Alaska, in 1954, all letters addressed to Santa Claus or the North Pole, found their way into the tiny town.  The residents of the town decided to answer them.  When I received my answer from Santa, it was on special candy cane decorated stationary with the jovial face smiling in one corner and my name written in at the top.  Even my childish eyes could see it was as simulated as the pages of a story book, but I had played the game and received something in return.  In fact, it was the first realization that if I wrote a letter and mailed it, there was a good chance I would receive an answer.  Letter writing extended toward distant friends and relatives and the post office became a magic delivery service; each day an eager wait for the envelope with my name scrawled across the middle.

Last year, over 150,000 letters arrived at the North Pole from 26 different countries.  This was apart from the thousands that had no return address and couldn’t be answered.  Even unstamped letters arrived for Santa; an extraordinary move for the US Post Office.   The assistants in the town of 2,100 sign themselves off as Santa’s helpers on the pre-set stationary and chip in to buy stamps and envelopes for return letters.

In his 10 years as an elf, Gabby Gaborik has seen every kind of request. There are the children who want the latest toys and gizmos they see on TV. There are the children who ask for miracles, orphans wanting their mother back for Christmas or a father back from Iraq, even though he died there. Many letter writers point out how good they’ve been. Some enclose a dollar bill to cover postage.

Most of the children remind Santa of how good they’ve been that year, then throw in the sales pitch.  “How many cookies do you think you can eat when you visit?”  No matter what the bribery, Santa doesn’t promise anything.  Ideally, the parents write their own replies to their children’s letters and stuff them together along with a self addressed envelope inside a larger one for Santa.  Regardless of how the letter is sent, the child receives a letter back with the image of Santa on the letterhead and postmarked, “North Pole, Alaska”.

The Santa Claus project at North Pole, Alaska started over fifty years ago by a town that thought it would be fun to answer the letters written by small children and entrusted to their care.  There was no particular concern for the expense or time involved; it caused no increase in material assets for the volunteer elves.  In fact, North Pole, like any other small Alaskan town, has a marginal work force.  Its main income is dependent on two oil processing plants placed there during the construction of the pipeline in the nineteen seventies.  The Santa Claus House has grown to a commodious industry, offering a holiday with Christmas any time of the year, with festive decorations, a large selection of gifts, a jovial Santa and plenty of elves.  Although the main occupation of Santa’s helpers has changed from gold panning to oil worker, the spirit of their once a year free labor remains the same.

When the last of my siblings reached an age where they became suspicious of the identity of Santa, I asked my mother why they continued with the charade.  She gave me one of those small, secret smiles she was so professionally capable of giving.  “It’s nice, don’t you think, to give a gift anonymously.  It shows that you are giving without asking for anything in return.”

It didn’t take me long to process this information.  I had been a good girl scout and learned that brownies were as real as the North Pole.  They were the ones who woke early in the morning before anyone else was awake and did a few chores just to surprise the family.  The reward was the amazed expressions that broke immediately into pleasure and the “who done it” guess work.  I had practiced my expertise as a brownie a few times, although a resistance to early morning hours greatly limited my brownie expertise.

The greatest gifts were the anonymous ones, the ones that received no personal thank you’s, no expectation of reciprocation, no motivation other than the desire to spread joy.  Santa Claus, as demonstrated by the volunteers at North Pole, exemplifies this spirit of giving.  During the holiday season, they process as many as six thousand letters a day.  They ask for no thanks.  They spend their own money on stationary and postage stamps for the letters that don’t have postage enclosed.

Alaska is no fairy land in the winter, especially in the far northern regions around Fairbanks.  The temperatures become bitterly cold, often plunging thirty and forty degrees below zero, fahrenheit. There is no true sunlight, only a few hours of daylight when the sun’s reflection lightens the sky to a dull bone color.  The multi-colored lights, the decorations, the energetic bake-offs and flurry into hand crafts adds add excitement and cheer to an otherwise very harsh and depressing time of year.

These are serious times; hard times for everyone.  Even those who have jobs are living within an income of half its buying power of just a few short years ago.  It’s understandable that people will want to dampen their rush into embracing the highly commercial aspects of Christmas, extravagant gift buying, expensive dinners and vacations, but there is an art of giving little in terms of cost; that only consume a bit of extra time and patience.  The North Pole residents enjoy this time of year as an opportunity to give a little to make small children happy.  They enthusiastically embraced the game that gave Alaska its own Disneyland.  The town prides itself on its Christmas identity, and signs of it abound, from striped light posts curved like candy canes to streets with names like Kris Kringle Drive. The biggest attractions are the post office — where tourists can get their postcards hand stamped with the North Pole postmark — and Santa Claus House.

The Post Office says all future mail for Santa should be addressed to, “1 Santa Claus Lane, North Pole, AK 99705,” although the residents continue to insist it shouldn’t matter how the letters are addressed.  If it says North Pole, Alaska, or even Santa Claus, they are ready to receive it.  They don’t care if there is no postage stamp, no return envelope.  Each child’s letter is wanted.  The general opinion of Alaska is that even though the Postal Service has acknowledged a formal address for sending Santa mail, it is still very much the Grinch that Stole Christmas.

By Karla Fetrow It seemed this year that Santa Claus had been fired.  Perhaps he hadn’t been doing his job well enough.  A second straight year of lower than expected retails are keeping merchants on edge,  and possibly looking for a better middle man to peddle their wares.  The US Post Office says it’s a…