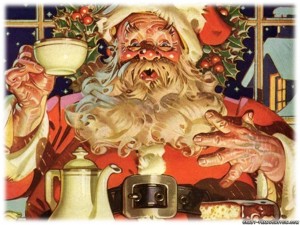 Now it begins. We are entering another season of great contention where those who focus on form are being heard in great stridency in order to make sure that the world in general uses the correct wording when wishing each other happiness during the days of celebration that come during the month of December. I hear so many people shout it loud and clear as they rail against anyone who wishes another a “Happy Holiday,” rather than wishing everyone a “Merry Christmas.” A focus on form rather than substance is either being shouted or printed in letters to controversy-loving newspaper editors.

Many of your fellow believers seem to make the assumption that all people are Christian. It assumes that everyone believes the myth of the child born of a virgin on a cold December 25th, and laid to sleep in a manger because there was no room in the inn. Angels, shepherds and wise men all contribute to this myth, and it is indeed a wondrous story that most of us who live in this “secular” country are familiar with. It is the story taught to our children either directly in churches, or indirectly by so much of our culture.

Indeed, a wondrous story is this myth. It fascinates children, and has a hold on adults who don’t look beyond the trappings to find seeds of truth. If Christ indeed lived in those times, he was not born in December, nor in all probability was he born in the “little town of Bethlehem.” Was there a census that would have forced Joseph to bring his heavily gravid wife to on that fateful journey? There is no record that such a census was ordered by Caesar, nor would such a census, even if ordered, have required the journey. Then, why is the birth of Jesus celebrated by his followers in December? Quite simply, the end of December was chosen to compete with the religious holidays celebrated with festivals in the lands and among the populations the Christians were attempting to convert. The early Christians knew that they could not take away the fun and frolic of the holy days already being celebrated, so they incorporated a kind of “if you can’t beat them, join them” into their early teachings. In this way Christmas was born under much more compromising circumstances than was the Christ child. I don’t write this to you to be disrespectful, but because it is true. It is all a matter of record, and all one has to do is read.

So my friend, what is in a name? Is there a difference between “Merry Christmas” as compared with “Happy Holidays?” Do such things as shopping for presents or sending Christmas cards have anything at all to do with what you as a Christian contends is the true meaning of Christmas? Should not the Christian be more concerned with the content of his or her heart rather than the form used to wish one another well? Did not the founder of your religious belief preach love of neighbor and respect for all peoples? Did he not? If a shopkeeper wishes to include all of his customers in his greeting for the holidays, why is this bad? Why does this offend so many of our Christian neighbors? Should the inclusion of those who are celebrating Hanukkah, Kwanzaa or Solstice be offensive to the Christian? Should an inclusiveness that reaches the Muslim, Buddhist, Taoist, Hindu or Atheist offend you as a believer in “the one true way?” These believers in other paths also have holidays they remember, and since they are not of your belief, should they be forced into the “Blessed Christmas” mode?

As written above, much of what has been incorporated into the celebration of Christmas is not Christian in origin, but based on other celebrations or invented as a secular adjunct to the holiday. Christmas trees, candles, Santa Claus, exchanging gifts and much of the music used in celebration, these and so many other things do not have their origin in the Christian beliefs. But quite frankly, there is much about them that is quite beautiful on their own. And, they can be fun, and are aspects of the celebration that can be enjoyed by all if they so choose.

Finally, I have to hope that the majority you hold will kindly ratchet down their rhetoric in the spirit of the brotherhood that their churches expound upon, and find a new cause for their annual vitriol. Wishing one a “Happy Holiday” does not take one whit away from what you believe the true meaning of Christmas has been for so many years. When one keeps Christ in Christmas it should come from their own heart, not from some external wailing about what a store may or may not be doing in its signs and advertisements for its products, and not from some misguided boycott instigated to pressure that shopkeeper to obey your edict. Your name in the paper below a letter critical of tolerance does not make you a better Christian….. in fact it indicates a rigidity of belief that is anything but Christian. As with any religion, it is how you live your life that is a reflection of true belief, not your ability to impose that belief on others. There is a part of the Christmas myth that should touch everyone of every belief, but most particularly it should reign in the hearts of all who believe. It is found in the words, so it is said, that the angels sang over the stable on that bleak December night: “Peace on earth, good will toward all men.” How could it be simpler than that? How has that message been lost to so many of your fellow followers of Christ in their December dealings with those who hold different religious and cultural beliefs? Where does that thought go?

And so, in ending this December letter to you, please let me wish you A Happy Christmas, A Happy Hanukkah, A Happy Solstice…. oh heck….. a Happy Holiday Season from this non-believer.