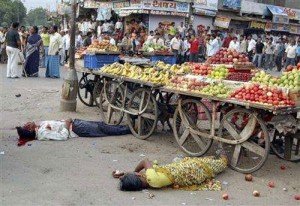 A year to the day after the last embers of the jihadist attack on Mumbai (Bombay) finally flickered out, I remember some things.

I remember watching with awe and respect as a tiny group of terrorists took on the might of the Indian armed forces and successfully fought them off for three days. I remember watching the media focus on the “iconic” targets the terrorists attacked – the Oberoi Hotel and the Taj Mahal Hotel, the latter of which incidentally has special dress codes for Indians but not for foreign tourists; the Leopold Cafe, also a favourite tourist haunt; and also Nariman house, home to a Jewish Centre. 59 poor plebeians were massacred in the Victoria Terminus railway station the first night, but their fate rated little mention. Why? Because they weren’t worth the media attention? Because they weren’t members of the Great Indian Muddle Class or white foreign tourists? Because they didn’t wear designer jeans?

I remember, in the days that followed, the anger of the people of India in general and Mumbai in particular. Indians – unsurprisingly – felt that they had all been attacked; Mumbai is intimately written in the national consciousness, more so than any other city, in part due to Bollywood. The people of Bombay, who normally view the rest of the nation with disdain, took the sympathy wave as their right, of course. Of them, the poor carried on with their desperate lives. The ultra-rich lived their insulated lives in cocooned comfort. As for the Great Indian Muddle Class, it erupted in rage. It demanded that its city be freed from the clutches of politicians and turned over to businesspeople and/or technocrats to rule. It went ballistic in declaring that this must never happen again. It even dared to poke fun at the Thackeray family, different branches of which run the two fascist gangs, the Shiv Sena and the Maharashtra Navnirman Sena, which are the de facto rulers of the city, whatever be the government in power. It asked where the Thackerays were hiding as the jihadists stormed the town.

So, now, a year has rolled by, and what do we have?

The government at the centre, which pledged all help to the victims and strong action against the perpetrators, has quietly turned away from countering the jihadists and declared the Maoists to be India’s “Public Enemy Number One”, and is now all set to bomb forest villagers into submission so their lands can be exploited by mining concerns. Meanwhile, corrupt ministers are revealed to have swindled thousands of millions of rupees (that’s right; one, Madhu Koda, far from the biggest villain, made a cool forty billion rupees from granting mining corporations rights to mine illegally in protected areas of Jharkhand state) but continue, untouched, in power.

Our armed forces are still buying enormously expensive and unusable white elephants like aircraft carriers rather than outfitting with the security equipment we need, like good bulletproof vests and usable rifles and SWAT-type training.

The people of Mumbai, who only last year condemned the state government and wanted it out, had a chance to throw it out at an election this year. Only 40% of those very vocal, very visible (at candlelight rallies) Mumbai people bothered to vote in the election and the same government was handily returned to power. The state’s Home Minister, who had been sacked after the attack, is today back in the same post. Protest rallies on the one-year anniversary looked more like public fairs than like protests. And the Thackeray family is back to the centre-stage, demanding that all non-Marathi people be stopped from entering Mumbai and claiming that cricket player Sachin Tendulkar isn’t a true Marathi because he didn’t ensure the Indian cricket team was stuffed with Marathis when he was the team captain and could have influenced selections. Cricket, as it happens, is a national obsession.

Yesterday, I was watching part of a TV programme on Discovery Channel called “Surviving Mumbai”, which was almost entirely focussed on foreigners – British, Turkish, whatever – who were stuck in the middle of the fighting. Indians who were shown were pretty much all employees of the hotels that were targeted and not the man in the street. And this was supposed to be a serious programme, and was being shown on Indian TV.

There was a brief flurry of excitement when some arrests were made earlier this month, but, frankly, I wasn’t interested enough even to read the details. Apparently they involved a US citizen called Healey who is of Pakistani origin and had helped in reconnaissance and organisation of the attacks. Apart from the fact that the alleged lone surviving terrorist, Ajmal Kasab, is now on trial, there’s little or no more.

Until it happens again, the nation has moved on.

By Bill the Butcher A year to the day after the last embers of the jihadist attack on Mumbai (Bombay) finally flickered out, I remember some things. I remember watching with awe and respect as a tiny group of terrorists took on the might of the Indian armed forces and successfully fought them off for…