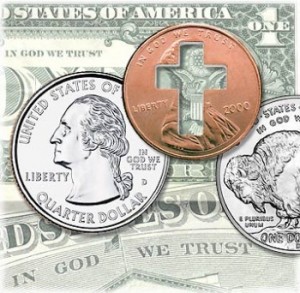 Sarah Palin seems to have found the key to her own resurrection on the National Scene. Write a book. Or, better still, have a ghost writer do the work under your name. Yes, that’s it, and fill it with the distortions of the truth that many of those who have access to advance copies are finding, because it is known that most people will believe what they read. After all, isn’t that the way American politicians begin their second act? ?

I had no interest in this book, thinking that it is to be just another political white wash, but then the news started to be filled with the latest lie being lived by the lady from Wasilla…. that being her courageous display on behalf of the “In God We Trust ” motto on the newer dollar piece. Ms. Palin railed against the Federal Government because these one dollar pieces had the words engraved onto the edge of the coin rather than on its face. She pledges to use all of her power to have this travesty changed and the motto replaced in the area to which it belongs. (a somewhat dubious and debatable issue in itself, but for another time.) You betcha!

Here’s the problem with the good lady’s quest: It has already been done. Yes Ms Palin, a little research would have shown that on the first issue of the presidential gold coins, the motto was indeed placed on the edge of the coin. In subsequent issues it is back on the face of the coins. Oh, and by the way, the original issue was under the George W. Bush administration, and not under the administration of the heathen Democrats. A series of Presidential “gold” one dollar coins were authorized in 2005. The first of these honored George Washington, and was issued in 2007. It was on this issue that the motto had been moved to the edge of the coin. At that time a hue and cry went up from conservative radio hosts and it was taken up by ditto heads everywhere. “How dare the Government try to hide this reference to god”…. and… “They are pandering to the atheists.” The Congress stepped in and passed a law requiring the motto to be brought to the obverse of the coin. The controversy should have been finished.

With helicopter blades whirling and guns blazing Sarah Palin comes riding to correct the misdeeds of Washington and the Federal Government. She is late! Very late! Two years too late! And her lack of intellectual curiosity is exposed once again. Does this lady not know how to read? Has she never been taught the value of a modicum of research before setting off on a verbal quest against a problem that doesn’t exist? It should be embarrassing to say the least… and damaging. But to whom?

It should be embarrassing to Palin and her people since it was reported by the press in the manner that one would report the joke of the day. But it really isn’t a joke, and it isn’t at all funny. The former Governor of Alaska has a following, and there are people who believe what she says. A local newscast here in Conservative-land questioned the man and woman on the street as to whether they thought the Palin story was true, and whether they thought it was an issue that should be brought to the American people at this time. With the exception of one, all those polled believed it was still a problem, and many said they would not accept these coins if given to them in change at the bank or at their local grocery store. I have received emails begging me to refuse these “gold” coins because they are godless and have no place in this country that stands for god, motherhood, apple pie and a hot lunch for orphans and how could anyone take god’s name off those coins, Amen!

And the Governor becomes the self-styled champion for all of these people.  Fat chance anyone will have opportunity to even see these coins in circulation. The coins are being snapped up by collectors as fast as they are released by the mint. But still the problem remains. The major problem that so many people believe what they hear, no matter how stupid the words might be.

What does this say about the population in general. Is it that so many people are really that dumb? Has the dumbing down of America become a reality? Or is it perhaps that people have become so desperate for excitement that they will suspend reality and embrace any cause no matter how hollow it actually is. Do people just have too much time on their hands?
I shudder when I think of the lies and half-truths that are being seen in the advance copies of Palin’s book. She and her ghost writer have , according to those who have read the book, had a good deal of trouble recognizing and setting down the truths relating to her stewardship as Governor of Alaska and of her resignation from that post. She has also had difficulty distilling the truth of her selection as the Vice-Presidential Candidate for the Republican Party and the subsequent campaign with John McCain. Apparently it is all leading up to creating a kind of Calamity Jane image as a Rogue, but a scrupulously honest rogue, and she seems to believe we just might be stupid enough or desperate enough to swallow it.
Excuse me…. while I wretch…………

The David questions Sarah Palin’s campaign to save the new coin mintage for God.