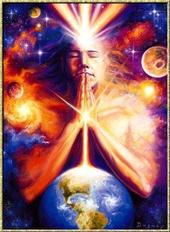 A couple of months ago Subversify decided to tackle Spirituality.  It was hard to do, as it turns out Spirituality is not full of a lot of mass.  However although we kept falling like Charlie Brown trying to kick a football, we here at Subversify are not quitters.  This is a submission from regular contributor Neonorth.

The best way to describe my own beliefs in the idea of spiritualism is that they are based on, Cree mysticisms, an amalgamation of scientific theory, the Buddhist inspired self awareness chakras and for lack of a better word, George.  Each part is distinct yet complimentary in order for the maintenance of my own self delusional peace of mind.

It is the belief of the old Cree religion that everything in life is about balance; you cannot take something without replacing it or acknowledging that it is a gift given by the gods to you.  If you don’t keep the balance through act or prayer then you cause an affront to the gods and they show their displeasure by simply taking away that which you had taken.  It is the belief that human kind is not the only living beings in the possession of souls. Animals and plants have souls as well.  If you are in harmony with the environment it opens you up to hear and feel when these souls are present and if you have been mentored by an elder who has been taught the ways of these souls you can interpret the messages that these souls have to give to you allowing you a better understanding of what is around you. This means thanking the animals, fish, and plants that you kill in order to feed, shelter, clothe and provide in all ways for your clan as well respecting those within your clan.  The souls are the portals to the god’s blessings or admonishment of who you are as an individual though the purpose is to be a part of that community.

This ideology by no means precludes violence against others.  The Cree very much believe in the eye for an eye, tooth for a tooth mentality.  In the long ago there were many battles between tribes for this reason; one thought the other had taken something that had been theirs and in order to bring back the balance, retribution must take place.  But for the most part it is the belief that one is a part of nature and must be in harmony with your environment or everything can suffer from the imbalance.  The Cree system of belief is in a lot of ways very similar to Zen.

Science I rank second in my spiritual make-up.  Often science and faith are seen as polar opposites; yet if one considers that scientific truth is based on elemental beliefs then you can extrapolate that in order to have scientific fact one needs to have faith that what is theorized can be truth.  The first tenet that I firmly believe in that came from this scientific outlook was the law of conservation: That for every action there is an equal and opposite reaction and that the mass and energy involved is constant with no loss in what is there in the first place. In my mind this coincides with the ideal that all things are in harmony.  I believe that there is a specific amount of matter, antimatter and energy in the universe that has always been, there is neither growth nor decay, just shifts in the perspective of what those amounts are on a sub-atomic level.  The cycle of a cloud is an example of this:  Clouds form when hydrogen and oxygen atoms are intermixed with the atoms that make up the particulates of the ground in the atmosphere; they glom onto one another forming a cloud. Once that cloud is too heavy to maintain the mass, the molecules that are mostly hydrogen and oxygen atoms that have an opportunity to share electrons begin to fall to the earth in the form of ice, rain, sleet, snow, mist or fog.  These molecules stay on the ground until the sun causes the atoms to lose their cohesiveness and rise in order to start the cycle all over again.  In the spiritual sense, I believe that life is like that, there is no real beginning or ending, but just cycles of existence where one is aware of being an individual just like a rain drop and with the metaphorical cloud being the collective conscious.  I believe that there is a collective consciousness that is present around us at all points in time though it exists on a faster moving molecular plane than what we for the most part cannot sense or interact with.  I believe that everything is as it always has been; that everyone, everything is just a temporarily placed piece of the collective consciousness – a sort of individualistic group of atoms that have decided to take a vacation from being one to becoming a series of ones to re-establish their own placement within the collective.  I believe that we are here not to attempt to attain perfection to be let into the heavens but to remember why the collective exists.  I believe that souls and spirits are separate entities; that souls are the searchers of their place while spirits are the guides and benchmarks of that soul’s experiences.  Spirits never rejoin the collective, they simply wander around like rogue electrons looking for the next atom to join temporarily this is what I call life.  When the soul departs that spirit retains that information until the next explorer comes along and mutates it to its needs.   I don’t believe that there is a great plan but a collection of randomness and chaos that must exist in order for the collective consciousness to exist as the counter to it.  I believe that if a soul doesn’t find its harmony it mutates into something else that the attached spirit cannot identify which leaves taints in its path until the soul without its spirit guide finds a balance in order to bring that spirit back into harmony with it.  I do not believe that human kind is cut in the image of the collective consciousness, which is why our egos demand that we perceive ourselves to be in the image of ultimate cosmic power as it the soul’s yearning to be closer rather than farther from the reclamation of its purpose of being.  I believe that the reason why spirituality brought forcibly en masse in the form of religion produces such violence is because there are far more souls without a close connection with their spirit partners and the loneliness that the soul feels from being apart from the security of the collective conscious demands that an artificial one be produced.
This leads me to Buddhism

Buddhism
The third concept component of my spirituality is the Buddhist notion of the seven chakras. At first it sounded like a lot of claptrap, this idea of Ohm and that there were physical representations of the chakras within our bodies as well as lotus’s.  Thankfully my guide in this practice never forced his ideas on me but challenged me to think upon them as they pertained to my own experiences.  Over the years I have continued looking at the chakras and their representations and have come to accept that self actualization is a process of progression, though I don’t see it as linear course but a staggered one.   Over the years I’ve mellowed somewhat, become more reflective on what my behaviors are rooted in.  I have resolved many of the past issues that used to wrack my brain with a feeling of being lost by letting in a certain amount of “what will be will be” attitude in spirituality, some call this letting go of expectations.

George
The fourth part of the building blocks of my spiritual base is George, after George Carlin.  The acknowledgment that one has to have the ability to see the humor that’s all around one.  Life is full of trials and tribulations; I came to the conclusion that to be fully aware of yourself you had to have a large chunk of levity amongst the seriousness.  I spent years wrestling with questions of what my true values were and if they were in harmony with my own behavior, though I had always resolved the questions in my mind I never felt that I was in balance.  Inanity has to have a place in the cosmic schemata because not to recognize that it exists leaves too many holes to patch in spirituality.

By: Neonorth
Not all of us reach or even desire a hard set of rules for caring for our spirit. Come and reflect on one Man’s interpretation.

The Jackals Of War