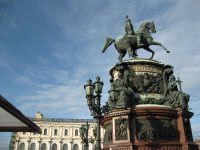 Did I just visit the cottage where Leo Tolstoy was born, the place he was buried or just a statue of the guy?  As much as I love visiting Russia and want to stay here forever, all this tourist stuff is finally starting to just meld together for me and I’m getting all confused.  Whose palace did I just visit?  What was the name of that church?

But thinking about Tolstoy has also gotten me to thinking about War and Peace — and not only just the novel by that name but about the actual concepts themselves.  How can we ever achieve peace in this world when the blood-thirsty war-hungry bully elements of human society always seem to be so much more powerful than the rest of us?  Take Afghanistan for instance.  RAWA, a peace-loving women’s organization in Afghanistan, didn’t defeat the Soviet Union.  The USSR was defeated by fierce and brutal tribesmen sporting deadly USA-supplied weapons.

The Soviets didn’t leave because Miss Manners politely asked them to go or because the local imams prayed for them to go back to Moscow.  The Soviets were forced back over the mountains by armed madmen.

What would Tolstoy have said about this?

Who knows what Tolstoy would have said — but my friend Anwaar Hussain has a lot to say about Afghanistan today.  So I’m taking a break from reporting about the various landmarks, palaces and churches of Russia and reporting about events on the Af-Pak border instead.  And take my word for it, Leo.  The news about Peace there is NOT good. 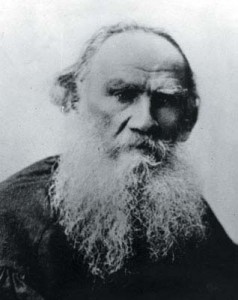 According to Anwaar, the so-called Taliban have stolen the moral high ground in the Af-Pak region by making it appear that they, and they alone, are the chosen representatives of God — and it is now time for the American-backed Pakistan forces to take back the moral high ground.  “The government should use all means at its disposal i.e. media, clerics, political leaders, etc., to highlight the fact that these are no godmen.  These are common thugs involved in the drug trade, kidnappings for ransom and contract killings, to name a few activities, masquerading as godmen.  Take their golden shoe away from them and beat them back with it.”

Anwaar also recommends that Americans need to stay out of the battle between Pakistan forces and the so-called Taliban.  “For now, the Americans need to watch silently from the sidelines.  They have lost much face with their blundering jaunts in Iraq and Afghanistan and the wanton killings in those unfortunate countries.  They need to stand back and refrain from adding further weight to the Taliban’s golden shoe.”

So.  What should America to do?  Hire Pakistan to fight its battles for it?  That won’t sit too well with the Afghans, who claim that Pakistan’s scheming intrigues against them have been responsible for most of their woes during the last several decades.  But Anwaar goes on to suggest that it is also a bad idea for America to do nothing.

“Don’t talk of winding it up in days/weeks,” he recommends.  “Be prepared for the long haul.  By its very nature, insurgencies are protracted affairs.  Even after several months, Malakand continues to remain on a low boil.  Moreover, given South Waziristan’s terrain and the nature of the foe, a significant part of the militants’ strategy would be to encourage the military to penetrate deeper into the region i.e. farther up into the mountains, the favorite fighting ground of the militants, and then tie the soldiers down with hit-and-run tactics.  That is likely to keep the soldiers engaged in a long-drawn-out operation in the unfriendly terrain over the winter.”

According to Tolstoy, isn’t that what the Russians did to Napoleon?  Will the Taliban use winter to help defeat the Pakistan Army too?  And never forget that the treacherous Af-Pak mountain winter is also a player in this Great Game.

I would love to go to Afghanistan again, to embed with the Marines and report on the war now going on there — but I’m not as stupid as Napoleon.  I’ll wait until the winter is over.

Anwaar then goes on to state the obvious.  “Above all, what needs to be remembered is that while there is no doubt that the Pakistan Army will eventually come out tops in this conflict, insurgencies are not defeated by simply killing all the insurgents.  The root causes of this discontent, through reforms, education and reconstruction projects, will soon have to be addressed.”

Anwaar also sent me the following information from his friend Agha, who has lived in Afghanistan since 2004, and I am now passing this information along because I think it’s important to know his POV.  Then you can make what you want to out of it.

“With much bragging and swagger, the recent [Pakistan Army] Waziristan Operation [against Taliban-held areas] has been glorified as the mother of all battles,” wrote Agha, “and while it is important for military morale to spread the word that God or Allah is on side of the Pakistan Army, wars are not fought by propaganda or media alone.  It all boils down to superior strategy, superior operational strategy and superior tactics by a military machine which is well supplied, has the right firepower at the right time, good intelligence, high morale and finally the physical endurance to climb the highest and steepest rocky pinnacles and traverse mountain gorges under the deadliest threats of ambuscades and annihilation.” 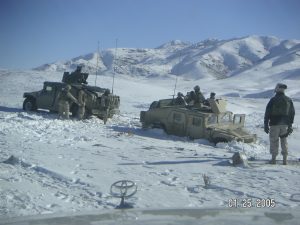 Then Agha offers his “two cents or half cents worth” of thoughts about Af-Pak.  “First of all, the Waziristan Talibans centre of gravity is no longer the Mehsud inhabited area of South Waziristan.  They have spread into Orakzai Agency, into DI Khan, into Bannu District, into Khyber Agency, Kurram Agency, South Punjab and most notably Karachi, which is a monster city of some 18 million souls some one third Pashtun or lets say one fourth Pashtun.  Any tangible military operation in Waziristan will not destroy the Taliban.  The Taliban require a broader strategy.

“Second, the Talibans are not an ethnic movement. They are an ideological movement and have some support, in all parts of Pakistan.  Seen in this context the Mehsud tribe although the core leadership of Taliban is a diverse set up in which leadership may not be destroyed even if the Mehsuds are destroyed or suffer serious casualties.

“Third, they say that security and power are more psychological than physical. 15,000 British soldiers held all India in the First World War!  Today 50,000 Pakistani troops cannot control FATA, 1% of the size of British India!  Have things changed or have we changed?  The Pakistani security forces have fast lost this moral deterrence since 2004 — with reverses in Waziristan, attacks on the corps commander and army chief and finally the GHQ attack.  While apologists may brush them aside as of no consequence, the intangible trends are dangerous.  A state cannot go on with an army that is no longer respected or feared — be it China, the USA or Pakistan.  This is Pakistan’s most grave strategic imbalance or vulnerability.

“Fourth, the Taliban are supported by non-state actors in Pakistan, have silent supporters within the state actors, have foreign state and non-state supporters who support them for various agendas.  By merely launching the army into South Waziristan, they cannot be destroyed.

“Fifth, the Taliban have been inflicting major damage on the USA are in Kandahar or Helmand since 2001, but these have been rewarded with rich construction and logistic subcontracts by US-AID agencies.  The Taliban carry on drug and weapons trade day and night and are not interdicted by any US forces as I myself have repeatedly seen.  Are they being prepared for Iran or at some stage China?  It’s a question that only history will answer.  These Taliban have their centre in Pakistani Balochistan but have never been attacked by the US.

“Sixth, so much propaganda and rhetoric has preceeded the Waziristan Operation that the Waziristan Taliban have had ample time to relocate to Birmal in Afghanistan and to other tribal agencies adjoining South Waziristan and even to Punjab, settled NWFP area and to Karachi which is the largest Mehsud city in the world!”

Agha thinks that the key to this whole issue may by implementing the following policies:

1.  Economically empowering Pakistan’s tribal areas with export duty-exempt industrial zones producing products to be sent to the USA and EU.  The naive US senate and congress have not addressed this core issue.  The Kerry-Lugar Bill is a waste of time.

2.  Serious reorganization of the Pakistan Army with heavy reliance on technology and on non-human military assets such as dogs, which have been so well used by many other armies fighting counterinsurgency.  So far the Al Qaeda has failed to infiltrate into dogs!

3.  Serious economic re-structuring of Pakistan with emphasis on power projects and incentives for small business.

4.  A rapprochement with India so that the primacy of the Pakistani military in politics is reduced.

5.  A gradual dis-engagement with the USA other than export-duty-free zones so that the demeaning impression of the Pakistani state and armed forces as petty vassals and mercenaries of the USA is reduced in the eyes of the Pakistani populace.

And here’s another quote from Agha that I am sure Tolstoy would love!  “If military operations could pacify any country, there would have been no Vietnam or Afghanistan or even 50 plus expeditions into Waziristan since the 1890s until to date.  The issue is not military alone but much larger.  Seen in this context, the abject surrender of Pakistan’s political leadership to the Pakistani military to find a Waziristan solution is pathetic at best and shameful at the worst.  As they say, war is too serious a business to be left to the generals.”

Perhaps our Congress should take note of that last sentence and engrave it on an arch over the capitol dome.

By Jane Stillwater Did I just visit the cottage where Leo Tolstoy was born, the place he was buried or just a statue of the guy?  As much as I love visiting Russia and want to stay here forever, all this tourist stuff is finally starting to just meld together for me and I’m getting…