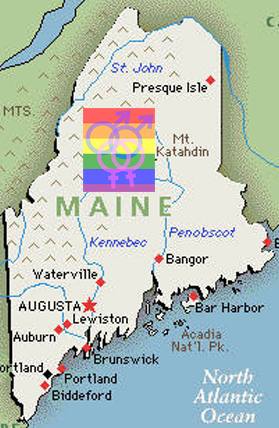 I was not at all confident. I firmly believe that when the rights of a minority rest with the “good will” of the majority then the minority will always become the loser. Same-sex marriage will once more become illegal in Maine. Once again, a referendum has taken a basic right away from a struggling minority. Some see this as a “power to the people” move that affirms and adds to the strength of democracy. In fact it is the opposite: It is a move that adds to the power of an already powerful majority by diminishing the value of a group that is, in fact at their mercy.

Maine voters blew their chance to be a national leader in the fight to repudiate bigotry within their own living rooms. They threw away the chance to prove that in this bastion of “Yankee Tradition” all are welcome at the table. They threw it all away. What they gained is a law that suppresses how a minority might live within the borders of the state.

But does it? What referenda of this kind actually do is curtail what legal options are available to members of the LGBT Community. Whether in Maine, Florida, California or any other State that seeks to limit behavior that is innate, same-sex relationships will flourish. Marriages will happen with or without the approval of the State. Before the African-American secured the right to marriage under the law, they “jumped the broom” and these marriages were as valid and valuable as any performed with the pomp and ceremony of those taking place in a cathedral. It is that way for homosexual men and women as well. They may not have a ceremony or “a broom to jump,” but they will have marriages. These marriages will be based on the same attraction, love and commitment that countless Hollywood Productions have told us are within the province of our straight, heterosexual brothers and sisters only. But human rights are not a game of win or lose for either side. When any group loses a right, all of society is diminished by that loss.

Behind this loss lurked the churches and the often misguided sheep who practice what comes from the pulpit when it is convenient to do so. The Roman Catholic Church is given the credit for shepherding this blow to the gay community, but most Christian churches joined with them. They strongly urged their parishioners to take a stand for god and vote down marriage for the godless queers. And so they did. It was an easy vote for many. It was not as though the church was asking for a vote to validate their stance on the divorce that results in separation from the sacraments; they were not asking for a vote to ban so called artificial birth control , nor was the Church asking for a referendum to make it illegal for all those who have committed adultery or fornication to embrace marriage. Even those who have had to make the difficult decision to abort a pregnancy are not faced with state laws that prevent their marriage, and this vote was not about that. Catholics who have been taught by their church that all of these life-choices are morally wrong and not tolerated within their own group could now point the finger at other people who were made to stand outside the Church, even at a greater distance than they themselves. What the Church doesn’t teach it’s people is that gay and lesbian people are who they are because of nature. Homosexuality is innate. There is no choice here. It is who we are.

By The David I was not at all confident. I firmly believe that when the rights of a minority rest with the “good will” of the majority then the minority will always become the loser. Same-sex marriage will once more become illegal in Maine. Once again, a referendum has taken a basic right away from…