Phasing out Thanksgiving for the Party 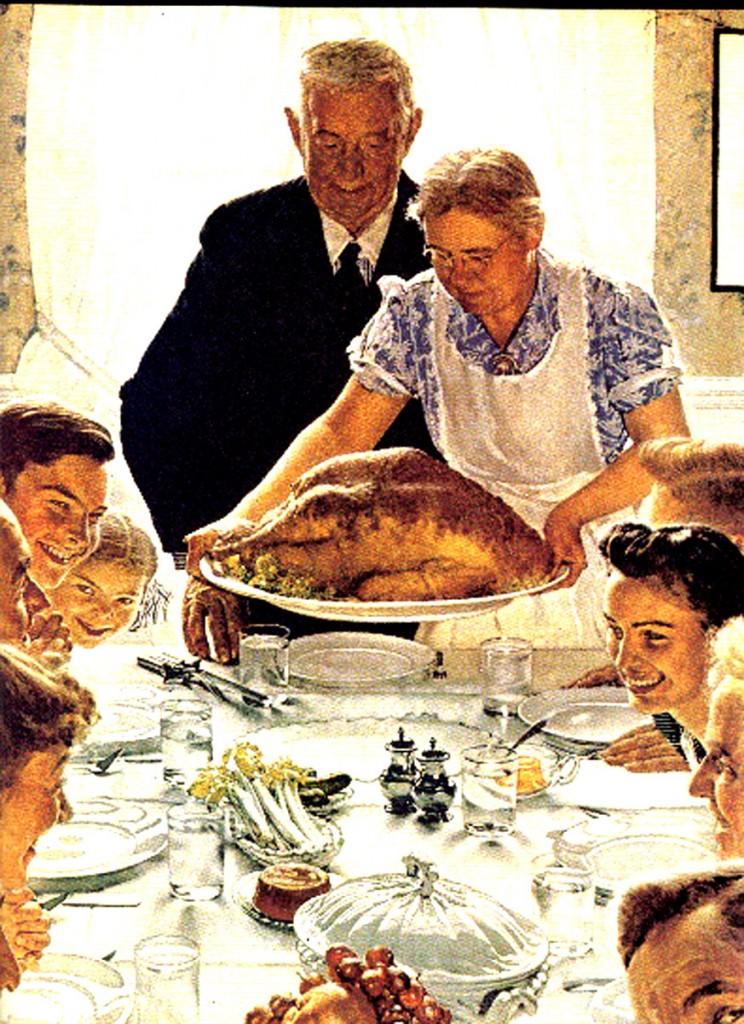 It seems America has been coming increasingly less thankful for the day set aside to acknowledge our blessings. For many, the day is looked forward to more for the party, football and beer than it is for the family gathering around the table. Increasingly, the roll call of family members who are able to sit down together for the feast is shrinking. Despite being an official National holiday, an estimated 23% of Americans will be punching the clock instead of celebrating Thanksgiving. Another estimated 23% will be lining up at retail stores in anticipation of Black Friday specials that have been creeping steadily into Thursday.

For the labor force, whose budgets simply aren’t stretching to meet their expenses, the news becomes even more glum. Not only will they have to work in stores jammed with bargain hunters and restaurants filled with the “I don’t want to cook but I do want a Thanksgiving feast” consumers, many will receive no overtime pay and will not be allowed to take sick leave to be with their families. Walmart’s, a leading retail chain that seems to have a lot to be thankful for as a bustling profit-making industry, will be putting over one million of its employees to work on Thanksgiving day.

For some, tossing Thanksgiving out of the picture is a welcome thought. Not only does obligatory gratitude to an unseen power smack of forced worship to atheists, but even among Christians, there is opposition. Thanksgiving, they point out, is a hypocrisy. It commemorates a feast between the Pilgrims and Native Americans that helped them survive a brutal winter. In return, the Colonialists began a systematic campaign to annihilate the First People.

Actually, this line of reasoning is somewhat flawed. To begin with, the Pilgrims were not the first to hold a Thanksgiving. Setting aside a day of feasting and gratitude is a tradition buried deep in early Colonial tradition, with roots leading back to Europe. The first documented Thanksgiving celebration in the colonies dates back to Jamestown, which held a Thanksgiving feast in 1610, eleven years before the Pilgrims held their famous party. Canada traces its first Thanksgiving to 1578. Their gratitude was not for the harvest, but for surviving the long journey from England, through violent storms and icebergs in an unforgiving climate.

If we were to go strictly by the theme of a Pilgrim Thanksgiving, it would not be considered a religious holiday. The Pilgrims rejected any public display of religious celebration, but they did have a tradition of fasting and feasting. Their harvest feast lasted three days and included dancing, music, games and even drinking; a far cry from their normally pious lives.

A day of Thanksgiving continued to be celebrated sporadically during early Colonial times. When George Washington set aside a day of Thanksgiving in December of 1777, it was neither as a religious holiday nor as a harvest day. It was to commemorate a victory celebration honoring the defeat of the British at Saratoga. When in 1789, a member of the House of Congress moved that a day be set aside thanking God for the opportunity to form the US Constitution, Washington agreed to set the day as November 26th as an official date for prayer and Thanksgiving. Of the early presidents, only one did not follow through with the proclamation; Thomas Jefferson; who believed an official day of prayer interfered with the separation of church and state.

James Madison was the last of the early presidents to set aside a day of Thanksgiving. It wasn’t until much later that it became an official holiday. Much of this was due to the efforts of a journalist, Sarah Josepha Hale, the editor of the Lady’s Magazine and Godey’s Ladies Book. It took her thirty-five years of lobbying among a great deal of opposition before her petition found agreement with the White House. On October 3, 1863, President Abraham Lincoln signed the documents that made the fourth Thursday in November of every year an official national holiday of Thanksgiving.

Other than establishing a day for family communion and feasting, early Thanksgiving celebrations had very little to do with the Pilgrims. It wasn’t until the early 1900’s, with the popularization of paintings showing Pilgrims and Native Americans sitting together in peace that the notion that this symbol of ethnic harmony could bu used as a tool occupied a troubled US Government. Immigration had become a primary concern, as well as the integration of new ethnic groups into American culture. The Pilgrims became a symbol of the ideal immigrant, peacefully assembling with the First People for a day (or three) of celebration. 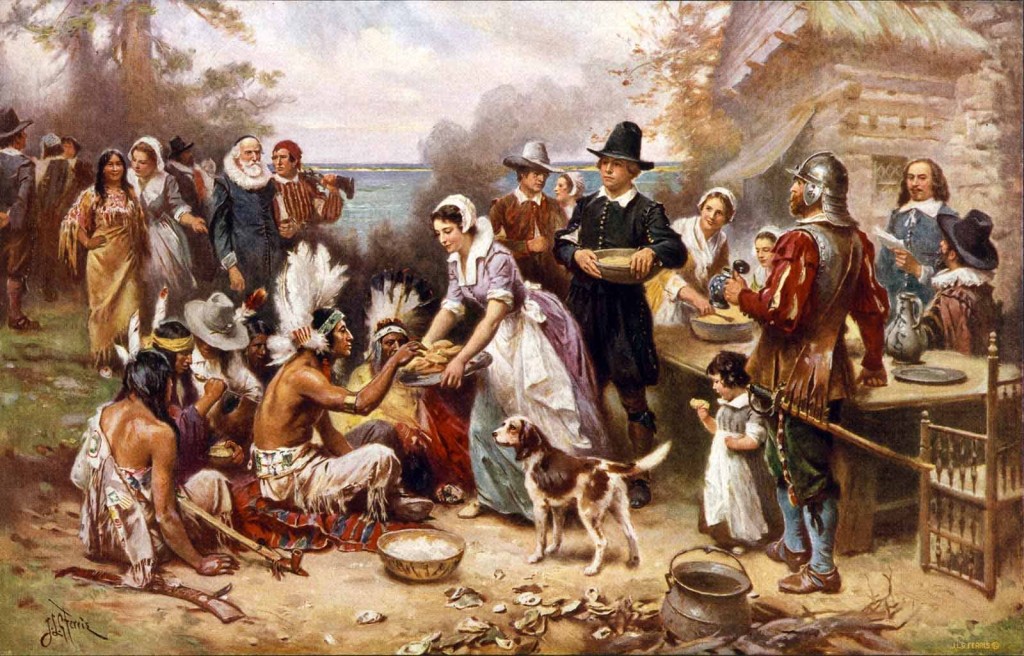 For a country plagued with guilt over early treatment of Native Americans, there is still very little understanding of Native American customs. The First People also celebrate a day of Thanksgiving. Their acknowledgment includes thankfulness to the fishes of the sea and the animals of the earth who surrender their lives that the tribes might eat. They give thanks to the Earth Mother for giving all we need for life, to the sun, the moon and the stars. They give thanks to the birds for bringing them song, and to the four winds for the changing seasons. Their thankfulness includes all the plants, medicinal herbs, the trees and the thunder that brings the water that renews life. After each acknowledgment of the gifts nature brings, they end with the words, “now our minds are one”.

Thanksgiving has become a party with parades, football, beer and feasting for a few, while a forgotten labor force struggles to make ends meet. It has become the official day for gearing up to mass spending for the far more commercialized Christmas celebration. You do not have to be religious to set aside a day for thankfulness. It could be a time for giving back to your community the joys it has given you. It could be a time for gathering with your family, giving thanks for the members who are present and honoring those who have passed away. You could take the example of the Native American people and give thanks to the bounties of nature.
A day for Thanksgiving is important. It helps us remember, no matter who we are, someone has given us a gift, whether it’s one of joy, security, family values or simply a sympathetic voice when we felt sad.

Karla Fetrow: We all deserve to enjoy the day set aside for Thanksgiving

How Zionism Created the Most Powerful Country in the World