Reporting from NN on unions: How the URSCR, the most powerful union in America, is destroying our country

Here at the Netroots Nation convention in San Jose, CA, the presence of various American labor unions are in evidence everywhere.

The National Education Association tells us a sad story about how 300,000 American teachers have been laid off in recent years — ever since No Child Left Behind decided to leave teachers behind too.

The Laborers’ International Union of North America says that they are ready, willing and able to put our country back to work, “rebuilding America’s energy systems, crumbling roads, bridges and transit systems.” Isn’t it time for them to finally start implementing our “Rooftop Revolution” and bring solar power into every home?

The Alliance for American Manufacturing demands the creation of more stuff that is “Made in America” — and I have their key chain to prove it too. “Make corporations pledge to move jobs back to the United States where they belong.” It’s as simple as that.

The SEIU gave a Karaoke party here. I got to sing along with 2 Chainz — and support American workers at the same time.

The unions here at Netroots Nation all represent good people, strong workers and proud Americans, trying to put the American economy back together again.

But there is one union in America that did not come to Netroots Nation.

There is one union in America that is doing everything it can to block our American economy from moving forward.

There is one union in America that goes on strike constantly, for months at a time, even though these strikes severely damage our country.

There is one union in America that bullies and threatens its members to keep them in line. 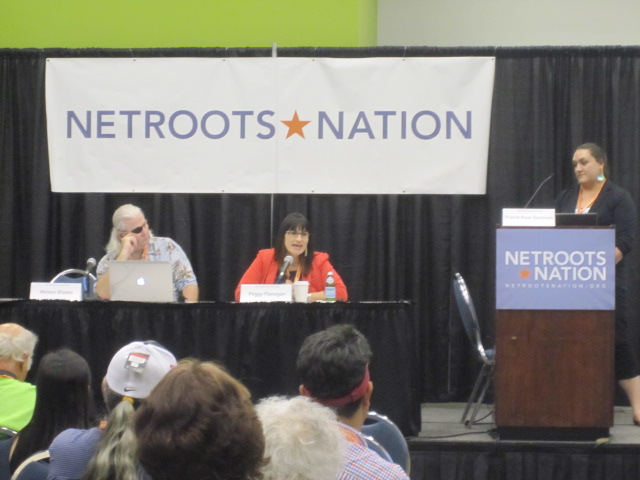 There is one union in America that misappropriates its member’s funds — and even outright steals them if it thinks it can get away with it.

There is one union in America that is lazy, self-serving, corrupt, inefficient and determined to destroy the very fabric of our country whenever it can.

It’s the URSCR, of course. The Union of Republican Senators and Congressional Representatives. And Washington DC is their union town.

PS: I’m currently attending a workshop on “Red-White-and-Blue-Washing,” wherein our good American jobs are being all shipped overseas and yet corporations try to make it appear that these jobs are being created at home. NOT.

Jane Stillwater coming to us live from Netroots Nation.

Palestinians & Native Americans: Where the Lost Tribes of Israel meet the Via Dolorosa