Does Your Neighbor Have Your Back?

Subversify welcomes Cara Giaimo, who writes for the SimpliSafe Home Security Blog. A man’s home is his castle, as they say, and no matter what kind of castle you have, Cara is there to help you fortify it. Hopefully the tips and advice in this blog help you feel comfortable and safe in your home, so that you can spend your time and energy doing the things you love. When not blogging, you can usually find Cara running, jamming with friends, or making strange types of ice cream. 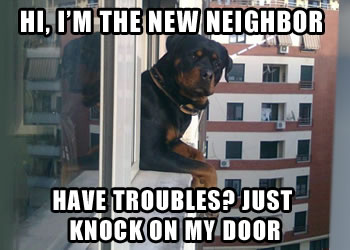 Think of your home’s first line of defense — what comes to mind? Your security system? Your barbed-wire fence? Your adorable but secretly vicious poodle? All of these will do in a pinch, but cast the net a little wider and you’ll find security starts up the street, around the corner, and everywhere in between. Statistics show that ⅔ of people feel safer in their homes because they know their neighbors, which makes sense when you learn about some of these hometown heroes. Read on to see how these neighbors have earned their stripes, and how you can, too.

On December 24th, 2012, three young Colorado Springs burglars decided they wanted a new car for Christmas. Knowing that a lot of families would be gone for the holidays, they targeted an empty apartment, broke in through the back door, found the car keys, and got ready to ride off into the sunset. And they would have gotten away with it, too — if it weren’t for Chris Willner, a resident who knew his neighbors were away and that no one was supposed to be in their house. As the burglars yakked it up in the stolen car, Willner approached them and asked what they were up to — when they didn’t have an answer, he yanked the keys out of the car’s ignition, detained one of the criminals, and called the police. Mr. Rogers would be proud.

Two things stopped this burglary — that the homeowners were savvy enough to tell a neighbor they were going out of town, and that the neighbor had enough guts (and observation skills) to stop the crime. If the victims had taken a few more precautions, though, they might not have been victims at all. Neighbors are great for keeping an eye out, but they can also help protect your home while you’re away by making it look like you never went away in the first place — picking up mail, cutting the lawn, clearing snow, even going through every once in a while to check on the place and flip some lights on and off. Make a pact with a close neighbor to trade off house-sitting responsibilities, and you’ll be sure to come home to the same house you left.

Watchdogs Off The Leash

Back in August, a “self-appointed group of neighbors keeping an eye on things” slapped a poultice on a rash of car burglaries in Colorado Springs. The group had a phone chain in place to alert neighbors about suspicious activity, and when car alarms started going off all over the neighborhood, they used it. A few went after the would-be thieves with sticks, eventually cornering them behind some bushes. Two teenagers came out with their hands up, probably scared straight for life.

Watch groups are great for fostering community, raising awareness, and getting the word out about dangerous situations. However, it’s important to make sure that your watch group doesn’t create a dangerous situation. This group was lucky, but untrained citizens shouldn’t pursue suspected criminals — the criminals might be armed and dangerous, or, on the flip side, they might not actually be criminals. These tips from the National Sheriff’s Association can help you start a safe and effective watch group in your neighborhood, or, if you want to join an existing one, use this database to find a group near you.

When burglar Richard Flores knocked on Roxanne Montes’s door and didn’t get a response, he thought he’d found a windfall — an empty house full of video games, clothes, and jewelry. But he didn’t realize that a sleepy house doesn’t mean a dozing neighborhood, especially not in Lubbock, Texas. As he broke into Montes’s home, loaded his car up with her belongings, and drove around the block, he had eyes on him every step of the way — a series of neighbors called the police, took down his license number, and let Roxanne know what was going on. And when Flores abandoned his running car in the middle of the street in order to flee the cops, neighbors were there, too — one to stop the car, and one to stop Flores.

Tip: Party All The Time

Block parties, barbeques and get-togethers inspire camaraderie and communication, and neighbors who know each other are far more likely to help each other out. Think about it — Mr. Johnson will feel more comfortable asking Ms. Rose to keep an eye on his house while he’s gone for the weekend if the two of them have been chatting for a while over chicken skewers. Some cities organize National Night Out parties to forge ties and give everyone a better sense of “who belongs in the neighborhood.” Set up one of those, host a building get-together in your apartment, or just take the time to walk down the street one day, borrow a bunch of cups of sugar, and introduce yourself. Nothing raises community safety like community spirit.

Subversify welcomes Cara Giaimo, who writes for the SimpliSafe Home Security Blog. A man’s home is his castle, as they say, and no matter what kind of castle you have, Cara is there to help you fortify it. Hopefully the tips and advice in this blog help you feel comfortable and safe in your home, so…