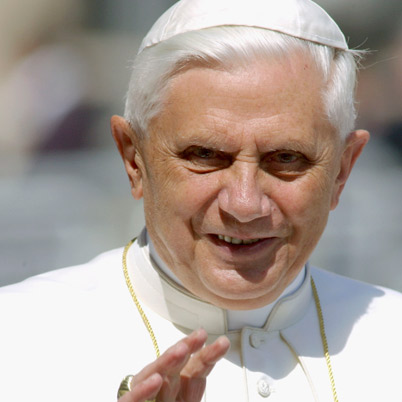 – A Perspective from a Former Pastor”

As a former pastor, I can personally attest to the fact that arriving in a new “congregation” and shaking things up is a bad career move. No one wants to rock the boat. No one wants to play the bad guy, break up the status quo, and “fire” a bunch of people who are guilty of slacking off, breaking policy, or doing something less than their absolute best.

When you’re the boss, if you have an iota of human compassion, you would find delivering bad news very difficult, especially in regards to a faith-based work. Yes, there are a few bad eggs here and there, but the majority of the people that you work with are hard-working, imperfect, occasionally air-headed and of course, extremely arrogant—as all human beings tend to be.

So that side of Pope Benedict XVI I understand. In my opinion it is likely he resigned because he couldn’t handle the bureaucracy of trying to change flawed policies of the Catholic Church, as relates to punishing child molesters. I do not believe that he was a pedophile. I do believe it’s possible he probably saw some evidence of wrongdoing within his church hierarchy, and weakly, humanly, chose to ignore it. In hopes of not rocking the boat. Hoping that God would forgive, that the victims would move on and that the perpetrators would have to live with the guilt of their wrongdoing.

However, as I learned many years ago, some things in life are not so easy. There cannot be repentance without humiliation, growth without criticism. And just because some actions are inconvenient, perhaps even rude to other people, does not excuse failing to expose and punish injustice. I can imagine a dozen situations behind close doors, inside the temple of God, in which it is not wise to rock the boat. Matters of ego, competition, misunderstanding and a clash of opinions. Indeed, a man who recklessly causes divisions amongst church leaders, shepherds of a huge flock, could be perceived as breaking Paul’s counsel at Romans 16:17.

Child abuse, however, is not one of these matters that can be left in God’s hands. As a Christian, a man in the position of authority, has the obligation to investigate matters of gross sexual exploitation, because not doing so would be tantamount to supporting the wrongdoing, allowing it to exist within God’s sanctuary. To ignore your obligation, in weakness, in hopes of keeping working men satisfied and employed, would be to ignore God’s sense of justice calling out to you—which could very well be working through you. After all, if God does work within religious institutions, one has to accept that he uses people to bring about divine will, perhaps even divine revelations, new commandments, changes to the hierarchy that bring positive results.

I speak of this as a man from the outside looking in, if you get my drift, not implying anything about God or morality, since both are obviously open to debate. I speak only as a sinner who can point to God’s law, the actions and the words of God’s approved clergy, and attest to the same scriptures that were once shared with me.

Pope Benedict XVI was correct to step down, if he covered up evidence in a moment of weakness. Anyone who acts in weakness is not deserving of such a high-ranking position. A man of leadership should be a paragon of internal strength and “blameless” in the sense that he near perfectly represents the ideals of a collective faith.

That said, I do feel that the hate-mongering coming from religion-haters (of course, the militant atheist community who feel so obliged to share their haw-haw! cheer leading, suggesting that religion is the sole reason any war was raged, any boy was molested—totally oblivious of the fact that man himself is a vicious creature) is disrespectful, and frankly thick-headed. What we are observing in the continual hatred surrounding the pope is total and unapologetic judgment, without evidence, without facts, based on hearsay, rumor, and worse yet, prejudice against people who have faith. (Or an unfortunate likeness to Emperor Palpatine of Star Wars)

What kind of animals are we that we should character-assassinate a man for a crime he may not have committed? People who really hate the pope don’t merely hate a man or his crime—they hate the Church, they hate religion.

And I might ask, do we really want to start hating the pedophile population with such fervor? How does one begin to classify pedophiles anyway? How does one compare a child murderer and a child rapist (a sin of power, exploitation and abuse) with a lesser sin of pedophiliac desires? The weakness in a man or a woman, someone who flirts with danger, and who wages a constant war against mental illness?

A man with unnatural pedophiliac urges may even be unaware of his illness, and forever and always unresponsive to them, which is—by all logic—a good thing. Such a man is usually the victim of some form of trauma, some cycle of abuse; whether he is oblivious to his inappropriate inclinations or outright fighting them, such a man is worthy of our support. By not acting, he is doing the right thing. The suggestion of total extermination of the mentally ill, as in “let’s kill all pedophiles!” is certainly not a viable or moral solution.

Of course, we as a society wouldn’t make the mistake of leaving such a weak man alone with children. Neither would we presume a man is guilty of such mental illness if we lacked sufficient proof to accuse him of an unspeakable crime. Neither would we fail to appreciate a man’s brilliant body of work, superb intelligence, and artistic flare, just because others mindlessly accused him of doing something unconscionable.

The Mysterious Sin of Pope Benedict XVI – A Perspective from a Former Pastor by The Late Mitchell Warren.

THE SHORT AND TRAGIC REIGN OF POPE LUCIFER I

Does Your Neighbor Have Your Back?