The Alleys Of Iraq

Recently, while looking over my stored computer files, I came across some older writing. Among these was a poem I wrote way back in 2004, called The Alleys of Iraq. Inspired by a Vietnam War-era protest song, The Fields of Vietnam, it took not very much effort to write except for one particular stanza which I kept revising over and over, until it suddenly sprang to my mind, full-blown as it were, during my morning jog. (I’ll leave it to the reader to guess which stanza that was.) I’d posted it online but since my readership at the time could be counted in single digits, it sank pretty much without a trace.

Anyway, coming across that poem, I wanted to see how it had fared with the passage of the years, now that the imperialist aggression part of the Iraq war is pretty much over and the civil war has restarted. It does have more than a touch of naiveté – back then, I still believed that the victory of the Iraqi resistance against the occupation would mark a return to at least a stable and socialist Iraq, something I’m not dumb enough to believe of any nation now. Today, if you ask me, I’d say that once the Empire has “throw (n) a crappy little nation against the wall just to show everyone it means business” (the Ledeen Doctrine) nothing can ever put that nation together again as it was, no matter who wins. You can’t unbreak an egg. But I was younger back then, and more idealistic.

Still, I was completely correct in one thing. Back in 2004, the nascent Iraqi resistance was still finding its feet, but even then I had predicted that it would be these “insurgents” who would finally drive out the Empire. And – looking back from today’s viewpoint – can anyone who thinks of it seriously deny that it was the anonymous Iraqi resistance fighter (whether a Ba’athist “dead-ender”, Mahdi Army member, or one of the troops of the various different resistance outfits) who have stopped the Empire in its tracks? If it were not for the bloodletting it suffered in the towns and deserts of Iraq, wouldn’t the Empire long since have invaded Iran and Syria at the least, and more likely than not Pakistan as well? But for the Iraqi resistance, would one be hearing at least some calls for restraint instead of all-out cheerleading for war on Iran and Syria? Of course not.

The Iraqi resistance halted the march of Empire. The Afghan resistance will force its retreat and eventual collapse. Whatever their other sins, those things can’t be taken away from them, and the world owes them gratitude for that.

So, here’s my eight-year-old tribute to the Iraqi resistance, exactly as I wrote it then. 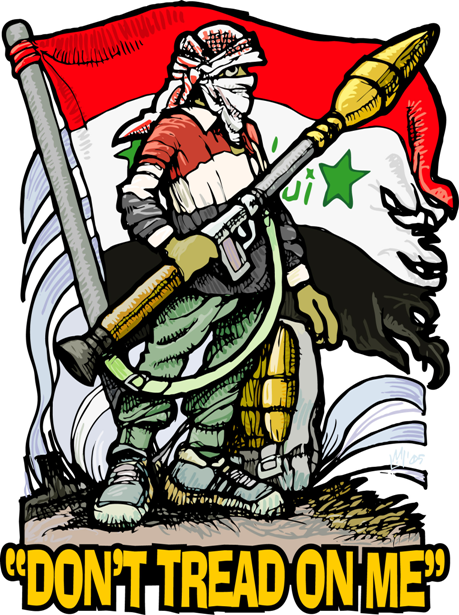 THE ALLEYS OF IRAQ

Oh brothers, though we’re strangers and your land and mine are far apart

And though the differences between us are numerous and stark

As the needle’s drawn towards the pole, I’m drawn both heart and soul

To write of your brave struggle in the streets and alleys of Iraq.

When for eight long years you fought the armies of Iran

Those it helped now crush you down, their flag flutters over town

Desert and river, but not the hearts of the land of Iraq.

They pushed you their war to suffer and to fight

To die for their cause, for them to bleed and to burn

Brother against brother pitted they, and while the sun shone they made hay

Watered with the blood of the peoples of Iraq and Iran.

Of war to ravage your great and ancient land

When peace came it didn’t last, this piece of your colonized past

Called Kuwait painted with blood the soil and water of Iraq.

They chain you now and talk of morality, freedom and of democracy

And claim the world is safer that they hold you down

But then they had said they didn’t care, Kuwait was none of their affair

Until their bombs rained on the houses and schools of Iraq.

For over a decade they starved you, bombed you and murdered you

In the name of weapons they said you had not disarmed.

When your children died for lack of food, they said ‘twas for their own good

That they wept and died, they said, these ‘liberators’ of Iraq.

Then came they once more, they said to ‘free’

With bombs, tanks and missiles, your people from Ba’athist harm

WMDs throughout the country, a terrorist under every tree

They claimed, and came to ravage the ancient land of Iraq.

A strange liberation these invaders brought, an odd democracy

While the Zionist entity cheered, they shot and raped and spurned and speared

Old men, young women, and the children of Iraq.

“We’ll kill you if you raise your head,” these foreign ‘liberators’ said

“We’ll raise a firestorm if you dare strike a spark.

Will signal the final destruction of the cities of Iraq.”

They thought it would be easy, their flag would fly

Over the land and sea, the rivers and the sand

(They thought they had broken your back, stretched you out on the rack)

Over city and village, orchard and oilfield of Iraq.

They thought you would knuckle under, accept your fate and kowtow low

While your oil paid for your slavery, and their boots pressed you down

Oh what a shock they must have got, when you stood your ground and fought

And washed with their blood the streets and alleys of Iraq.

In Ramadi and Najaf, from Fallujah to Baghdad

From hiding they bomb you and shoot innocents down

But the more they torture and they kill, the sharper your avenging steel

That slashes and chops them in the alleys of Iraq.

And though your name sits awkwardly and strange upon my tongue

Your war is ours too, this I must make clear to you

We’re with you in your battle in the streets and alleys of Iraq.

Brothers, where did you find the strength? I ask you this

Someday will end this violent night, victory will crown your glorious fight

Bill The Butcher revisits an older poem inspired by the Vietnam War-era protest song, “The Fields of Vietnam.”

Not A Good Place To Be and other poems.