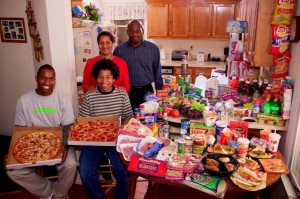 I’ve been thinking a lot about food lately. No, scratch that. I’m ALWAYS thinking about food. So the other day I wandered over to eat at Picoso, a family-run Mexican restaurant in north Berkeley that makes the world’s best guacamole. And while walking home past the world-famous Chez Panisse restaurant, I spotted a huge crowd of people standing around out in front.

“What’s happening here?” I asked one of the people in line.

“Michael Pollan and Maira Kalman are doing a book-signing event — and there is also free food.” Well, one of the major creeds that I live by is, “Never turn down free food” — so I bought a copy of Pollan’s and Kalman’s illustrated “Food Rules,” had it signed by the authors, went on a tour of Chez Pannise’s extensive stainless-steel kitchens and then sampled hors d’oeuvres that had been prepared using Pollan’s 83 rules about food. http://www.berkeleyside.com/2011/11/02/michael-pollan-new-food-rules-but-no-need-to-be-neurotic/

And I also ran into Alice Waters herself. “I usually celebrate my birthdays at Chez Panisse,” I told her, “because it gives me something to look forward to each year besides just getting old — but this year my birthday falls on a Sunday and you guys will be closed. And it’s my 70th birthday too! So what should I do?”

“Perhaps you could celebrate it here on either the day before or the day after?” Waters replied.

“Or you could try Aziza, a Moroccan restaurant over in San Francisco,” added Pollan. Then other people recommended trying Camino, Dona Tomas, Pizzialol, Quince, Cotogna and Commis. But it just wouldn’t be the same — not going to Chez Panisse on my big Seven-Zero. So we worked out a compromise. I’d have my dinner celebration at Chez Panisse the night before, eat very slowly, and then celebrate turning 70 at the exact stroke of midnight — even if it meant sitting out on the restaurant’s front steps after they closed. Perfect.

PS: Here are some of Pollan’s 83 really helpful food rules:

2. Don’t eat anything your great-grandmother wouldn’t recognize as food [and nothing highly processed or containing unpronounceable chemicals either].

5. Avoid foods that have sugar or some form of sweetener listed in the top three ingredients.

11. Avoid foods that are advertized on television [this rule should also apply to restaurants too. Thank goodness Chez Panisse doesn’t advertize on TV].

40. Make water [not soda] your beverage of choice. Do what animals do when they’re thirsty.

45. Eat all the junk food you want as long as you cook it yourself.

56. Eat when you are hungry, not when you’re bored.

82. Cook! Cooking just might be the single most important thing you can do for your dietary health.

Pollan then summarized his book in just seven words: “Eat [real] food, not too much, mostly plants.”

Which brings me to the “main course” of this article: Why food is so important to us: WITHOUT FOOD WE WOULD STARVE. So bear that in mind the next time you read about how Monsanto or Archer Daniels Midland or Congress is screwing with our food supply again.

Christopher Cook, author of “Diet for a Dead Planet,” states that, “It is no longer news that a few powerful corporations have literally occupied the vast majority of human sustenance. The situation is perilous…. This corporate occupation of our food isn’t just unfair and wrong; it’s impractical and destructive. It’s ruining farmers, the land and our future food supply.” http://www.democraticunderground.com/101616552

Yes, large for-profit-only corporations are endangering the food supply in places where people are barely subsisting and we’re always seeing photos of starving babies from there. However, here in America these same corporations are highly endangering you and me as well. Why? Because Americans just THINK that they are eating real food — when much of our food merely consists of the three Cs: Cardboard, chemicals and crap.

Americans may think that we are nourishing ourselves when we eat corporate junk-food but the reality is that all too many of us are dying young from heart disease or cancer or obesity or diabetes; that our thinking has become fuzzy due to lack of nutrients; and, even worse, we are always hungry even though we keep stuffing our faces with imitation “real” food.

A photo from Peter Wenzel’s book, “Hungry Planet,” shows a typical American family sitting around a kitchen table with all the food they will eat in a week — and there’s hardly even one real fruit or vegetable among all of that stuff! http://minnesota.publicradio.org/collections/special/columns/state-of-the-arts/content_images/HungryPlanet-USA.jpg

PPS: For a month now, I’ve been eating by the food rules of Dr. Terry Wahls’ famous “nine-cup” diet http://tedxtalks.ted.com/video/TEDxIowaCity-Dr-Terry-Wahls-Min — which consists of having every meal include one cup of colorful fruits or vegetables, one cup of deep greens and one cup of either cruciferous vegetables, onions, mushies, garlic and/or leeks. Eat nine cups of this stuff per day plus some salmon and grass-fed meat thrown in and see what happens.

“You get a long list of nutrients from [unprocessed] food that you don’t get from any other source,” stated Dr. Wahls, who cured herself of advanced MS on this diet. And, surprisingly, it appears to be making me feel healthier too — plus I’m actually starting to cook. Me? A chef? Who would have thought?

Jane Stillwater- Many Americans aren’t getting actual nutrients from their diets.

What’s With All The Heroics?