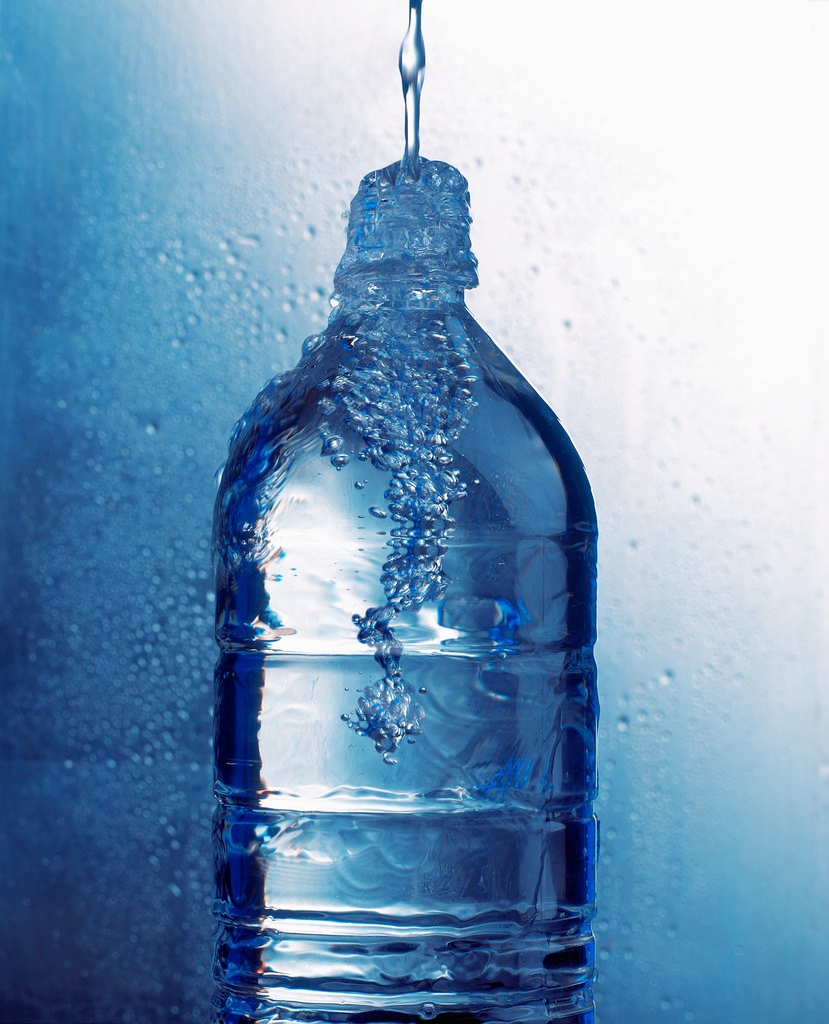 My fiancée is one of those people who can’t wait to pay for water! Every time we go out, he has to purchase some designer brand of H20. I’m a tap water person, so this drives me nuts! I keep telling him that bottled water is not as safe as tap water. Nobody believes me!

According to Nestles, a leading manufacturer of bottle water, more than 75% of what people drink comes from a can or bottle. Most people admit they would drink more sweetened beverages if bottled water were not available; which in the past has increased America’s caloric intake by 50 %.

With the obesity rate in children rising 370%, bottled water seems like a logical alternative for kids who might otherwise reach for sodas or other sugary drinks.

(Source: Bottled Water – Things to Know, Is it good for your health)

But is it safe?

What about the plastic used to make the bottles? Is there a danger from that?

Plastic bottles are safe when stored properly (out of sunlight), in room temperature and when consumed by their “use by” date, on the label.

A chemical called bisphenol has created concern among some. I wondered if this was used in making plastic water bottles.

H20 Bacteria
But none of this was my deepest concern in arguing this subject with my fiancée. I always worried about the bacteria in the water.

Long before modern studies had established the germ theory of disease, or any advanced understanding of the nature of water as a vehicle for transmitting disease, traditional beliefs had cautioned against the consumption of water, rather favoring processed beverages such as beer, wine and tea. For example, in the camel caravans that crossed Central Asia along the Silk Road, the explorer Owen Lattimore noted, “The reason we drank so much tea was because of the bad water. Water alone, unboiled, is never drunk. There is a superstition that it causes blisters on the feet.”

Everyone always told me that bottled water had less bacteria than tap water; so I began to wonder. I had heard something different from people in the know many years before. So, I asked myself some logical questions.

How could a container, holding a substance like a Petri dish, be safer? Especially, when I often saw it stored near sunlight in small markets, events, and other public places.

I had my suspicions it wasn’t, mostly from working for a company a who had created a laser that measured real-time analysis of the amount of bacteria in water.

They measured bacteria in: river water, bottled water, tap water and every water product you could imagine. (I wrote the marketing literature for this company, so I had a basic understanding of bacteria and H20 and a whole array of things that would put the average person to sleep.)
So, I looked it up here, in the American Water Works Association (AWWA), the nation’s leading source on all things water and the Water Library:

In case you weren’t aware, the AWWA Standards are guidelines for all facets of the drinking water community.

According to the professionals, bottled water is not safer than tap water. Why? 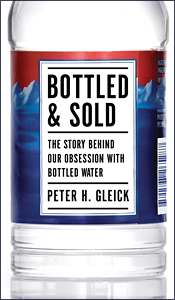 In Peter Gleik’s book, Bottled and Sold: The Story Behind Our Obsession with Bottled Water, he insists the world’s attitude toward safe, piped drinking water is unreal and that tap water actually is better for us. He explains that tap water is purified by a natural hydrologic cycle. He says:

Although tap water is safe almost everywhere in the United States, someone buys a bottle of water every second of every day — and the millions of plastic bottles discarded daily end up in landfills, waterways, even the ocean.

Gleick, recipient of a MacArthur fellowship and president of the Pacific Institute for Studies in Development, Environment, and Security, proposes that bottled water companies be forced to include the true environmental costs of the production and disposal of plastic bottles in the price of bottled water. Bottled water would then be an expensive option that most people will avoid.

Public access to drinking water would be easy, and selling bottled water… difficult, he writes, and government regulatory agencies should protect water from contamination and the public from misleading marketing and blatant hucksterism.

I also considered various Consumer Confidence Reports, which verified my suspicions for why people preferred bottled water. Many of our beliefs about water are studied in consumer confidence reports. There are a lot of reasons consumers distrust tap water and some of them are listed in these reports:

The risk perception of literature suggests CCRs may not be effective in communicating risk about the drinking water supply because of such factors as:

Risk perception and communication research suggests that people use intuitive judgments about risks based on their experience and environment. Although these mental models of risk may not be accurate, they should not be discounted. In order to communicate effectively, utilities must first determine what people believe and want to know about water quality…Once utilities have identified their customers’ beliefs and concerns, they can correct misconceptions and provide the information people desire..Based on individual, family or community health.

I still kept thinking about the opinions I had heard that bottled water was actually unsafe to drink. So I looked up the BioSentry — that laser that determined how many particles of bacteria were in water.

It is made by JMAR – a company that develops, manufactures and markets precision measurement, motion control and laser manufacturing systems.

If you ever want to learn about water, then you need to meet the engineers who designed the BioSentry. They will put you to sleep and wake you up with the amount of information they know about bacteria in water. For instance, bacteria particles come in all shapes and sizes. Bacteria molecular structure is varied and can be detected by the shape and size of the cell structure.

Now, can you imagine the various shapes of bacteria? Picture this, now; as water rushes over various platforms it picks up the contaminates along those platforms; contaminates like Typhoid and various roundworms. For instance, the moss on the rocks it tumbles over, the bacteria in the ground along the bottom of the river bed, you name it!

Now picture water running through machinery to bottle it. How many bacteria particles do you think it might pick up in a food and beverage processing center? This is what JMAR says about its real-time laser, the BioSentry:

Using its BioSentry® water monitoring system, JMAR recently conducted a study to test the purity of seven of the leading brands of bottled water in order to answer two pressing questions:

Just how pure is bottled water?
and
Does greater cost equate to greater purity?

The seven brands tested were Aquafina®, Arrowhead®, Crystal Geyser™, Dasani®, Evian®, Ice Age® and Spa. The baseline for purity, as measured by the amount of biological particulates detected, was established by using filtered, deionized water. Each brand was tested, and then compared to the baseline. The seven brands were labeled and presented in the test result charts in sequential order according to average selling price, from lowest to highest.

The results, as highlighted in the following charts, were surprising. We found significant disparities in regard to water purity among the brands tested. We also found there was no correlation between price and purity.

In the chart below, you will find particulate counts (per milliliter) for each of the seven brands tested. The BioSentry system uses four channels to detect measure and classify biological particulates, and each channel indicates a specific shape and size, ranging from 0.4 microns upwards to 10 microns. These particulates typically consist of non-viable, dead, or decomposed bacteria. Although these may not necessarily pose a health risk, they do make us question the overall purity of the water we drink, and for which we pay a premium

Now this may not mean anything to you; but to me…someone who has been hospitalized twice for food poisoning, it means a great deal.

For one thing, upon my return in February of 2011, from El Salvador, I found myself awake one night with an illness I’d never experienced before. I was violently ill, to the point I grew cold and clammy and finally passed out.

Due to being diagnosed with severe dehydration I had broken my rule about drinking bottled water, and drank from a few bottles of water given to me at a homeless shelter.

I became so violently ill that I was immediately taken to the hospital in an ambulance. The diagnosis?

I was extremely ill for several days after that. So, for me, bacteria and water strike my interest.

My fiancé is a man who feels he walks through life with a shield around him. I hope he never contracts an illness from one of those bottles of water. Like one that has been placed in the sun for loading onto a truck, someday.

Rebel Without a Pause