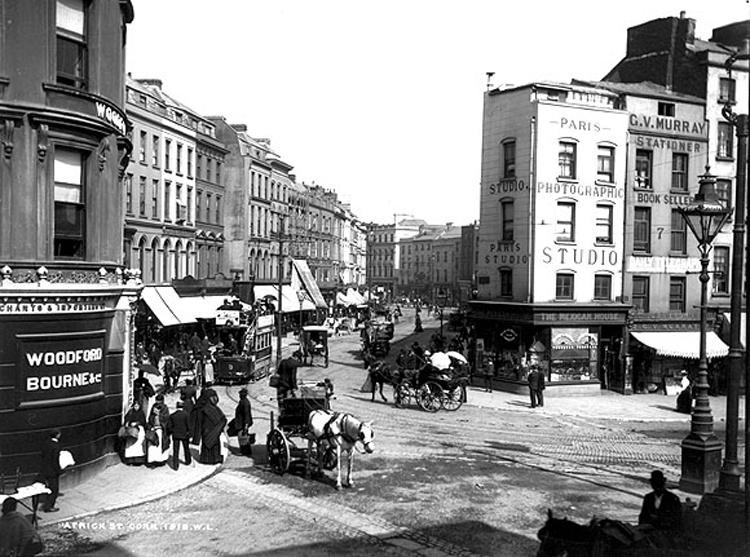 The Second World War had only been over about two years and back home in Ireland things were still very scarce. Ireland had remained ‘neutral’ and most of her farm produce continued to be exported primarily to England.

My father had been discharged from the Royal Air Force as a result of a supposed injury. He was supposed to be totally disabled but to my knowledge he never missed a day’s work over the following twenty years. He must have got some finance from the British Government as in 1947 he opened a shop in Main Street. He had all new machinery and equipment and it seemed as if things were really looking up. I remember feeling very proud of the fact and his trade as a shoemaker and repairer began to take off.

Holidaymakers would come in droves from the UK with most of the British cities having their own special week. For instance, you would have the Glasgow week, or the Leeds week, or the Cardiff week and so on. The town’s population would swell by about double from eight thousand. Every available room and bed was brought into service and a week’s full board could be had for about £4. It was not unusual for especially the boys of the house, to sleep in sheds or in fact anywhere during these holiday periods. I knew some boys who actually slept in a local farmer’s hay barn.

You have got to understand that this was the time before a lot of British working class people had even heard of Spain, let alone thought of having a holiday there. 99 point 999 percent of similar people would never have dreamt of flying in an aircraft, excepting those who had been in the RAF during the war.

Anyway, visitors suddenly realised that Dad’s handmade shoes were, in Ireland, almost as cheap as ready-mades in the UK. Consequently, from about May onward, he would begin to receive written orders for new shoes to be ready in June, July or August when the customers arrived on holiday. Come to think of it, he charged locals’ £5 a pair and visitors £6. The foreigners were quite happy to pay.

In order to fill the orders, at certain times, Dad would be working from the crack of dawn, about 5am until way past dark into the night. He would make, I suppose, two pairs of shoes a day besides keeping up with his normal repair trade. These were good times as it kept him out of the pub and away from the pitch and toss-school on Sundays. It did, however, mean that all his meals had to be taken to the shop.

One evening, it was my turn to take him his tea. This was a task which each of the children looked forward to, as invariably, the meal consisted of a large fry-up and a pot of tea. Anything he did not eat was YOURS.

This was the major version of the Sunday morning ritual, when in strict rotation one of us would take Dad’s breakfast up to him in bed. It was the only time that he did stay in bed a bit late. His breakfast comprised of a very large fry-up, which would be known today as a major cholesterol boost. Once again, anything he left belonged to the one taking up the breakfast. I know I did, and I strongly suspect that the others did as well, pray with the most devout fervour, that he had been drinking the night before and could not eat anything.

On a really bad morning, you would get nothing more than a couple of rasher rinds. However, on a truly magnificent morning, you might be lucky enough to get a couple of eggs on fried bread, sausages and all the black and white pudding. That was like winning the pools……………..

Right, back to the story: Mum got everything ready and I was too impatient to wait for her to put the two enamel plates in a carrier bag. I said I would carry them in my hands. She made me check to see if they were too hot, but I withstood the pain. My objective was to get it to my Dad as quickly as possible, him to eat what he wanted and me to eat the rest. So, naturally, I was rushing………..

As I began to cross the street, in my haste, I slipped and dropped the whole lot over the road. I stood there transfixed – what in the name of God was I going to do. Luck played a part, as, unlike today, traffic was at a minimum and you could if you wished, play marbles in the centre of the street with the very odd car driving around you. You were in more danger of being bitten by a passing horse.

I decided that I had to do something quickly. If I went home, my mother would kill me and if I told my Dad he would even do worse if it were possible. I suppose it is really, come to think of it, especially if he kept beating you silly before he actually killed you. At least Mum would have been quick.

Another point to remember is that horses were used during and just after the way in lieu of cars. There were also a couple of farms just off Main Street meaning I suppose that the cattle and horses did not mind where they did their business. Anyway, I sat on the kerbstone, picked up all the bits and pieces, wiped the enamel plates with my sleeve and began a reconstruction.

The sausages I cleaned by licking them clean in my mouth quickly followed by a large spit out of the rubbish stuck to it. Next came the black and white pudding, which I similarly cleansed. There was a problem with the fried bread as some grit was stuck to it. However, with the aid of a matchstick from the gutter, that too was removed. The two eggs were licked clean and replaced onto the fried bread. “There, he would never notice”, I said to myself “but I must remember that whatever he leaves, I must not eat as I might get poisoned”. It never occurred to me that he might be so affected.

Right, so onward I went. To the shop and I gave Dad his meal. I was obliged to wait at the counter until he was finished. He soon got stuck in and was really enjoying himself. I thought to myself that I had made a remarkable recovery from my misfortune.

After a couple of minutes, I noticed that a bunch of my father’s drinking cronies began to arrive and lean on the counter. “Are you enjoying your grub Paddy?” one asked. “Too true” said my Dad “the best of the best – are you jealous?” “No” they chorused, “I bet it has a great flavour,” added one. “Too true” said Dad. “It should do” the other said to Dad, “Mick hopped it all over Main Street. It must be covered with cow and horseshit”.

Once again in my short life, I was struck dumb and numb and could not move. However, I called up all my reserves of willpower and strength and legged it out of the shop. A quick look behind and I saw that Dad was after me with his hammer. I ran and ran until he could not keep going and I waited a long time before going home and telling Mum. I went to bed that night dreading his arrival. However, he never did say anything and years later I learned that he was quite proud of me for the way I had resolved a very delicate, tricky, and indeed, sticky situation.

The strange thing about this story is that it does not end there: At my Mum’s Wake many years later, my younger brother Peter claimed that it was he who had had the mishap. I did not argue with him at the time but during a family story telling marathon some years later, I challenged him on the subject. He again claimed to have been the culprit. I asked him to tell his version and as soon as he started, I knew it was totally different to mine. He too, a few years after my mishap had gone through a similar experience.

On this occasion, we had moved to the new home about a mile and a half from the shop. Peter was taking the meal in a shopping bag on his bicycle. He says it was pelting rain and he had his head down. Suddenly he crashed into the back of a slow moving car.
He states that he was badly cut on the legs and face and sat in the road crying his head off. The driver of the car began to panic and asked, “Do you want me to call an ambulance son?” “No” cried Peter “just help me to get me daddy’s tea back; he is going to kill me”. They picked up the rashers of bacon, sausages, eggs, fried bread and of course the black and white pudding.

He continued to the shop and did not say anything. The only problem was that Dad saw the blood on his face and demanded to know what had happened. Peter says he began to cry again and blurted out to Dad what had happened. Apparently Dad did not give him a reason to cry any more – much to my surprise.

Mike- On a really bad morning, you would get nothing more than a couple of rasher rinds. However, on a truly magnificent morning, you might be lucky enough to get a couple of eggs on fried bread, sausages and all the black and white pudding.

The Enemy of My Enemy