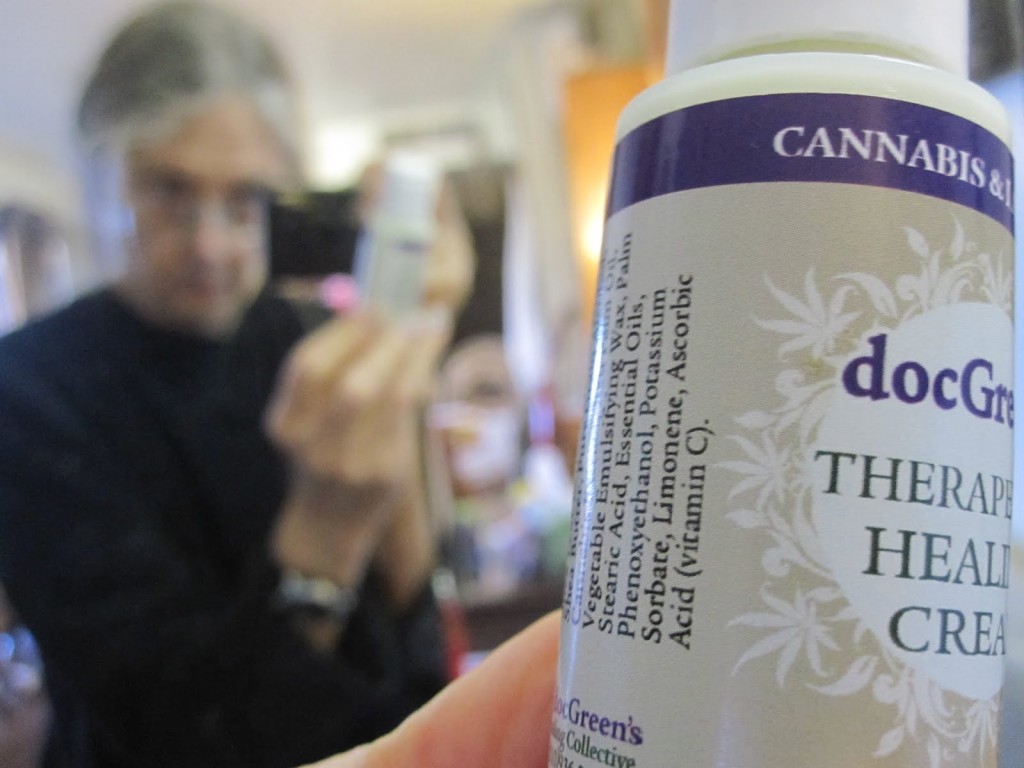 Now I’ve discovered “DocGreen’s Therapeutic Healing Cream,” which is made from shea butter, palm oil, vegetable wax and cannabis.  That’s right, you read that right.  I am currently rubbing marijuana onto my knees. 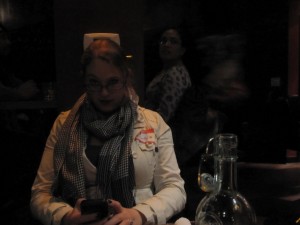 “But where did you get this stuff?” you might ask.  “While standing on a corner in West Oakland?  After skipping across the border to Tijuana?  By following hippies around up on Telegraph?  In the evidence room at the DEA?  Where?”

I got it at my friendly local marijuana dispensary http://www.harborsidehealthcenter.com/.  And what a trip that was too, with all kinds of types — from arthritic old ladies and dying cancer patients to young men and women who looked like they’ve never been sick a day in their life — standing in a really long line and waiting their turn in front of a huge display counter featuring everything from manufactured doobies and sativa buds to infused chocolates and ointments like the kind that I got.

Plus it also made me sort of happy — a big surprise there.  Not that I was stoned or zonked or nothing, and there was definitely no slow-motion-type incapacitation or uncontrollable munchies like I’ve heard that you get from eating dope brownies or smoking a spliff.  And there was none of that sudden Bob Marley “one-love” positive-vib stuff either.  I still have all the same worries and troubles that I used to have before — that corporatists are still destroying our country and my tooth still hurts and I’m still overdrawn at the bank — but now I’m just a little bit less on edge about all that and a little bit more able to cope.

PS:  I figured that since just a little bit of DocGreen’s healing therapeutic moisturizer helped my soreness and also my frame of mind, then perhaps I should try a bit more.  So I rubbed some of the ointment onto my sore neck as well.  Wrong thing to do.  An immediate headache resulted, and then I started worrying again all over — but this time more fiercely.  Oh rats.  I just knew it was too good to be true.  Looks like I’d better go back to trying holy water and saunas. 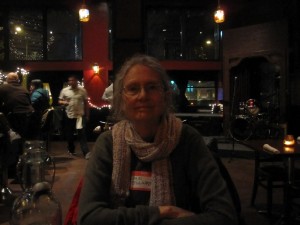 But then I listened to Layna Berman on KPFA and she said that many people end up getting addicted to various substances by trying to “take the edge off” their lives.  Hey, I wanna take the edge off!  But according to Berman, no, that’s not a good idea,   Apparently having worries is a good thing — because they force you to act, to try out different things that might end all those worries.  Perhaps like joining OWS in order to end the corporatists’ sleazy reign of terror in Washington?  Oh, okay.

Berman also stated that by using outside means of cheering oneself up, then our body loses its own ability to cheer itself up.

PPS:  Then I listened to a video on “Full Disclosure” that talked about how California is being taken over by Mexican drug lords — even including taking over the legal medical marijuana trade.  Yikes!

According to a recent “Full Disclosure” report, “Mexican Drug Cartels are controlling industrial farming of Marijuana while enslaving both the illegal alien laborers and the U. S. Farmers.  Once entrapped by the Cartels, they are unable escape with their lives.”  http://www.fulldisclosure.net/Blogs/107.php

Double yikes!  Now I’m in danger of becoming a member of the Sinaloa drug cartel!  Just because I’ve got bad knees.

PPPS:  If marijuana is illegal, shouldn’t they make all those other artificial feel-good substances illegal too?  Like cigarettes and booze?  Wouldn’t it be nice if you had to have a doctor’s prescription before you could set foot into a liquor store?

PPPPS:  Someone else just recommended that I just simply stick to eating mushrooms.  According to a recent TED video on the subject, mushrooms are the last best hope for this planet and we can even use them instead of fossil fuel:  http://www.youtube.com/watch?v=XI5frPV58tY  Yeah, but can mushrooms make my ankle and knees (and brain) feel any better?

PPPPS:  Then I went up to that dispensary on Telegraph Avenue at http://berkeleypatientscare.com/ and got a chocolate infusion to eat.  Forget that!  One small bite almost the size of a baby’s fingernail and I was absolutely frozen in place for the next TWELVE WHOLE HOURS.  I couldn’t even get to my computer to call for help on FaceBook!

This article is Part One of an ongoing series regarding the advantages and disadvantages of using medical marijuana. And if anyone wants to try DocGreen’s Therapeutic Healing Cream, please let me know and I’ll give you the 411.

From Yoko, regarding an update on the food and radiation problem still haunting Japan:
Kayoko and I have been invited to give a presentation at Pecha Kucha next Tuesday 1/24 in San Francisco.  We will be speaking on our experiences during our trip to Japan last October, in regards to food and radiation.  Please find all the info here:
http://www.umamimart.com/2012/01/umamimart-pecha-kucha-124-sf/

From Full Disclosure: The Dark Side of legalizing pot:  Is California headed for corruption much worse than in Chicago in the days of Al Capone and prohibition?  Watch this video assessment by Mexican Mafia and Gang Specialist Sgt. Richard Valdemar, who retired after more than three decades with the Los Angeles Sheriff’s Department.   He describes how the Mexican Drug Cartels are controlling industrial farming of Marijuana while enslaving both the illegal alien laborers and the U. S. Farmers.  Once entrapped by the Cartels, they are unable escape with their lives.  Valdemar cites a recent example of the desperation of “medical marijuana” dealers in the U. S. who cannot turn to the police to save themselves from the Mexican Drug Cartels now taking over operations in California.  http://www.fulldisclosure.net/Blogs/107.php

Jane Stillwater: I rubbed some of the ointment onto my sore neck as well. Wrong thing to do. An immediate headache resulted and I started worrying all over again.

Obama’s State of the Union and the GOP reaction