Libya Exemplifies Everything Wrong with the War on Terror 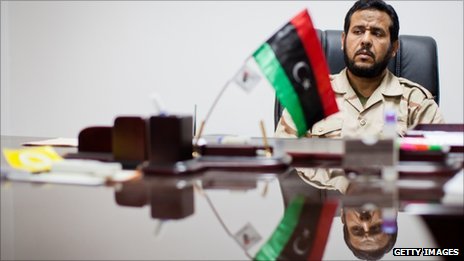 By: Bill the Butcher
So Tyranny has been defeated, once again, in Libya, and the evil dictator is on the run. The good guys have won – once again.
Or have they?
Well, Moammar Gaddafi has not only not been caught, enough of his people seem to have stuck with him to remain the nucleus of a liberation terrorist rebel army, and more than several parts of the country have stuck with him (how many times have the Glorious Liberators taken Bani Walid in the last few days, exactly? How often have they been vowing annihilation of Sirte unless it surrenders, while NATO is enthusiastically bombarding the civilians of that town? And what about the third, predominantly black, part of Libya, Fezzan? Who controls that? Why isn’t anyone talking about it? What with all those black corpses in Tripoli hospitals shot by the Glorious Liberators, I kind of doubt black Libyans will be too enthusiastic about liberation from Gaddafi tyranny. But I digress.)

What I want to talk about is someone called Abdelhakim Belhadj, and why his story is such a perfect example of the utter immorality of the War Of On Terror in general.
Who is Abdelhakim Belhadj, anyway?
Remember that Tripoli has a new government now – sort of? Well, actually, it’s got two sets of people running it. One’s the so-called Transitional National Council, an amalgam of Western-backed “revolutionary heroes” and Gaddafi men who jumped ship and went over, many at the last possible moment. The other lot? Well, it’s Abdelhakim Belhadj.
I think it’s time we learned a bit more about him. You know, because – as I’m about to discuss – he’s going to be verywell known soon enough.
Also known as Abu Abdullah Assadaq, Abdel-Hakim al Hasidi, Abdel Hakim al-Hasadi and Abdel Hakim al-Hasady, he was born in Tripoli in 1966 and became an engineer before turning to jihad in an attempt to overthrow the secular regime of Colonel Gaddafi. He moved on to Afghanistan in 1988 to participate in the anti-Soviet jihad (paid for and organised by the CIA, of course, as we all know), and met, among others, that great freedom fighter (as he was then, before turning overnight into the World’s Most Evil Man), Osama bin Laden.
After the mujahideen took Kabul and promptly began a full scale civil war against each other, Belhadj returned to Libya in 1990 and set up an organisation called the Libyan Islamic Fighting Group – which, incidentally, was banned as a terrorist organisation after the 11/9 attacks. This Libyan Islamic Fighting Group (based in Benghazi, the Freedom-Loving Capital of Free Libya, in case you forgot) carried out an anti-Gaddafi rebellion, including three attempts to kill the man (at least one of which was paid for by MI6) in the mid-nineties. By 1996, Gaddafi’s forces had essentially destroyed the LIFG, and Belhadj returned to Afghanistan, where the Taliban had captured Kabul and castrated and hanged the former president, Najibullah, and his brother, to the total and absolute lack of condemnation from the United States of America. There he met Mullah Omar, and set up two training camps, one of which was headed by one of Al Qaeda’s current top ideologues, a Libyan named Abu Yahya. Also, many of his LIFG men joined Al Qaeda with alacrity, and he had no problems with that.
By this time, obviously, he’d graduated to being an enemy of the Empire, and after the invasion of 2001 he left Afghanistan and was finally arrested in Kuala Lumpur, Malaysia, in 2004 after the CIA and MI6 (his old paymasters, both) tracked him down. They didn’t send him to Guantanamo Bay – they first sent him to a secret CIA prison in Thailand and then turned him over to Gaddafi (who back in the mid-2000s was best buddies of the same people who suddenly discovered earlier this year that he was Evil Incarnate).[source]
According to Belhadj, he was tortured during the seven years he spent in Tripoli’s Abu Selim prison, where he went “three years without a shower and one without seeing the sun.” [source] Then, after he’d allegedly “moderated” himself, he was released from prison last year, at the instance of, of all people, Saif al-Islam Gaddafi (the Monster Number Two, if you haven’t forgotten). This made Belhadj so grateful that he spoke on an unreleased Al Jazeera interview in March thanking Saif Gaddafi – the same man he was trying his hardest to hunt down and kill when Tripoli fell. (Don’t expect Al Jazeera to be too eager to publicise that film just yet; that channel has sold out long ago to Qatar, the same Qatar which provided most of the rebels’ new weaponry.)
When the uprising (I won’t call it a rebellion or revolution, because those are emotionally charged words) against Gaddafi began, Belhadj jumped on the bandwagon, with his own ex-LIFG fighters (now called the Islamic Movement of Change) and other jihadists. Soon enough, he launched his own little coup d’état, having the only secular military leader the rebels had – Abdel-Fattah Younis – murdered, leaving him the only possible choice as military commander of the rebels. And that’s his position today.
Oh, and he’s the military commander of Tripoli as well.
It goes as I predicted – the “rebel” movement is cracking up before the anti-Gaddafi war is even done. The Transitional National Council, the NATO-backed puppet regime populated with “democracy-loving revolutionaries” and defectors from the Gaddafi regime, has no legitimacy amongst the Islamist militia groups which did the actual fighting.
Ismail Sallabi, head of the Benghazi military council, called on the NTC to resign, castigating its members as “remnants of the Gaddafi era” and “as a bunch of liberals with no following in Libyan society”. [source]
Somehow, I have trouble believing that these people, who have been fighting for an Islamic Emirate in Libya and Article One of whose draft constitution declares that Sharia will be the basis for law in the new Libya, will care all that much for a

democracy where they might have to surrender all the real power that is now within their grasp.
Nor do I think that the TNC will want a real democracy, somehow, one which might throw up a government which might decide the revenues from Libyan oil should benefit Libyans and not enrich foreign neocolonial vultures. Democracy in Libya, obviously, isn’t going to happen. There will be a lot of fighting, however, over the shape of the non-democratic regime to come.
Obviously, Belhadj himself has no great love for the British and Americans who were his former paymasters, but who shopped him to Gaddafi with great alacrity when the time came. Documents left behind by Moussa Koussa, who was Gaddafi’s spy chief before defecting to Britain early in the rebellion, clearly prove Britain’s role in handing over Belhadj – who has now demanded an apology. Working on the belief that a colonial empire (even if only in its name, “Great” Britain) hates to apologise, I doubt Belhadj’s demands will be met any time soon. Also, working on the belief that an Islamic regime in Libya is liable to be more anti-Western than a puppet regime of imported “revolutionaries” and ex-Gaddafi collaborators, the West will stick its nose in. And once the people of Libya discover that they’re going to have to either sacrifice any social liberalism or become economic slaves to foreign capital (the more likely situation, backed up by a foreign occupation force), they’re going to revolt – again.
And soon enough, Gaddafi will evoke nostalgia, fond memories, and wistful sighs for how good things were.
Let’s see all the ways, then, in which Belhadj represents every single thing wrong with the War Of Terror:
1.     He’s a jihadist who was built up, trained and financed by the Empire without concern for the long-term circumstances.
2.     He was paid by a Western democracy’s intelligence service (MI6) to murder a foreign leader, allegedly without the knowledge of the British foreign minister. What do you call an intelligence service which acts independently of the democratically elected government? A secret police? A private murder force?
3.     Like so many jihadists, when his purpose had been served, he was shopped to his enemies. Something he should have expected, seeing that another name for Britain is Perfidious Albion.
4.     When he became useful again, he was picked off the ground, dusted down, and morphed into a “freedom fighter” once more. Does anyone really believe that he, and the other jihadists who spent the last years fighting the Empire in Iraq and Afghanistan before turning their guns on that secular despot Gaddafi, will suddenly let go of their radical ideology and their anti-Western attitudes and turn into model democrats? No?
5.     Talking about that secular despot Gaddafi, once again, as in Iraq, Afghanistan (in the eighties), and now in Syria, the Empire is eager to overthrow secular Arab regimes to replace them with Islamic fundamentalists without a thought for the consequences (unless said consequences be laying the groundwork for a full-scale occupation). This is not brilliant long term planning.
I suspect very strongly that when the civil war between the “freedom-lovers” starts in earnest (not very long now, but the initial shots will be blamed on Gaddafi loyalists until it can no longer be hidden – remember the “Saddam dead-enders” in Iraq?) Belhadj will once again morph into an Evil Enemy. Since most people seem to have the attention spans of decapitated cockroaches these days, it won’t even occur to them that he was a tool of the Empire – not once, but over and over again. Like, oh, Osama bin Laden, for instance.

Bill The Butcher-So Tyranny has been defeated, once again, in Libya, and the evil dictator is on the run. The good guys have won. Or have they?

Dogs That Defied the Laws of Science