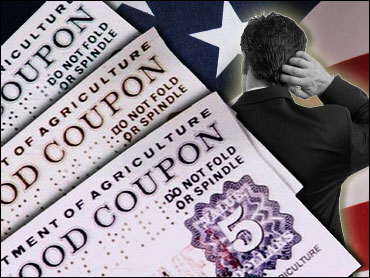 There’s no doubt about it we have a nation of hungry people.  Many would argue that we should perhaps let them “eat cake” as was once attributed to a Queen who lost her head.  After all we are also one of the most obese nations in the world.  It’s hard to feel sorry for people, even poor people when they are walking around with a hundred or more extra pounds.

However, in the last twelve years, without a doubt all our lives and economic status’ have changed.  Many of us are reliant on one form of aid or another.  Perhaps you don’t even see your aid as aid, but you are happy to receive garden overflow from a friend, it helps stretch out your grocery week.  Or you are more open to hand me downs whereas before you vowed never to put your children through that.

In this time of trouble, our government is sitting on funds that are allocated to help people.  It’s a shocking thought when we hear congress arguing about the efficiency of cutting social security, Medicaid and other social programs.  But the fact is we have unused dollars and hardly anybody is asking why.  Those that do are also venturing the hypothesis that these unused dollars could be helping our flagging economy.

In California, a whopping $4.9 billion in benefits is left on the table each year, money that some say could juice the economy by $8.7 billion in related activity; like stores that sell commodities, farmers that grow the food and factories that process and package it.

Supplemental Nutrition Assistance Program, or SNAP, (what we used to call the federal food stamp program, no longer are actual ‘stamps’ used instead EBT, an electronic benefits transfer is utilized) states that they are working to make changes to make it more efficient but one wonders why this hasn’t been done and if the money is truly there or has been re-allocated to other places.  Even if it hasn’t it certainly must be talked about.

Our nation doesn’t have a friendly stance on welfare in general and SNAP in particular.  People often cite the misuse of the food allocations.  General complaints are that SNAP users buy food that working citizens cannot afford.  Things like meats and fish and cheeses that in these times people are having to cut down on.  Also, those receiving SNAP will indeed abuse the program buying high ticket items like imported Coffees and returning them for cash or shopping for someone else in trade for money.  The purchase of junk food is another complaint.  Some states in fact have junk food clauses in their Food Assistance Programs, most do not.

We are a nation on the fence with many traditional lawmakers and voters not liking how the food program has been being used; the fact that money that is allocated is not being used is just another argument for them that we should do away with the programs.

At the same time we have some of these traditional voters for the first time in generations maybe needing the assistance they have voted against.  For the first time they are getting a glimpse into the bureaucracy that wraps these programs up and keeps people from getting help.  They are frustrated and are not used to the actual work involved with getting aide.  It’s beginning to shine a light on some of the problems with these programs that people have remained blissfully unaware of up until now.

In the state of California where we grow a great deal of the nation’s food and a lot of the world’s, we are facing some embarrassing statistics. Less than half of those eligible in California enroll, compared to a national average of 70 percent. That’s second to last in the nation.  Compared to their neighbor just to the north, Oregon where 90 percent of those eligible enroll.

Much of this is due to poor legislation.  Currently if you have committed a non-violent drug felony you do not qualify for assistance of any kind.  This logic becomes extremely stupid when one realizes that those who have been convicted of violent drug felonies as well as any other felony are eligible for aid.  That’s right, in California you can kidnap someone, murder them, bury them in the backyard and do your time and get food stamps, but if you are busted with pot while driving forget about it, you’re going hungry; and more alarmingly so is your family that’s anyone who lives in your household.

Another big problem that California in particular has is the requirement for all recipients to be fingerprinted.  This may seem like a small thing and reasonable, however it poses a hardship for families who work.  Contrary to what some people believe most people receiving SNAP nationwide work at least part of the time taking time off during the workday to go to an approved fingerprinting site is a hardship.  Particularly when one has to take time off from a job that may or may not be covered.   In addition many of the working poor have people lining up to fill their jobs, they really aren’t going to leave an excuse to be laid off or fired.  And do we want them to?  This is the big argument that welfare detractors consistently make.  “I work for a living, why shouldn’t they?”  And yet in order to get help, they need to effectively not work.

There is also the distrust factor. Not many people want to willingly give up more of their information than necessary, so this requirement is a stumbling block in reaching families that want to stay off the grid as much as possible. The USDA estimates the fingerprint requirement deters enrollment in food stamps by as much as 7 percent. In addition, the CFPA (Consumer Financial Protection Agency) has found less than 1 percent of food-stamp investigations nationally are due to multiple-aid fraud. Additionally, the state auditor has determined that the fingerprinting requirement is unnecessary, thought it costs the state about $17 million annually.

There are bills on the table aiming to fix some of these problems.  California Assembly Bill 6 aims to eliminate the fingerprint requirement and switch to semiannual reporting. The bill would also help people with receiving a stipend for utility bills through an initiative known as “Heat and Eat.”  This is a good idea for more than the fingerprinting problem; a stipend for utility bills would go a long way towards helping families in need, not abuse the SNAP system.  Others states are and should be looking at doing more of this.

“Fifteen states have already removed this law,” noted Jessica Bartholow, a legislative advocate for Western Center on Law and Poverty in Sacramento. “Although the numbers are low, about 890 people, it costs a lot to administer and doesn’t recognize people have done their time and instead imposes a lifetime sentence of hunger. It also makes it difficult for their families and for them to successfully reintegrate into the community.”

This issue goes beyond feeding people and enters the territory of also keeping people out of prison.  Ex-Convicts who have done their time should suffer no more punishments.  Isn’t that the point of going to prison, to pay your debt to society?  What good does it do when you come out and cannot provide for yourself and your family and a situation is created where you are a social pariah?

The Federal government under President Obama has been pushing hard for poor performing states like California to fix these problems.  They want to see streamlined application processes and the fingerprinting issues corrected.  It may be one of the things our current administration has gotten right.

In the mean time we need to be looking more towards how SNAP dollars are being spent.  According to the U.S. Department of Agriculture, the number of enterprises approved to accept food stamps grew by one third to 209,000 in 2010 from 156,000 in 2005. With the rise in approved establishments, food stamp benefits also grew to $64.7 billion from $28.5 billion for the same five-year period.

Now businesses like Yum! Brands, which include Taco Bell, Long John Silver’s, KFC and Pizza Hut, have been applying in states to accept SNAP EBT.  This new wave of food service friendliness is being pushed along by lobbies and is based on a provision dating to the 1970s allows states to allow restaurants to serve disabled, elderly and homeless people.

If we are truly concerned about health when it comes to feeding people we should be paying attention to these lobbyists who are trying to find a way to get a financial pick me up in a time when a lot more Americans are eating out less often.

Whole food is a standard America should be looking for. Even better, fresh whole food.  To that end a lot more farmer’s markets are set up to accept EBT which is good.  It is the market to table model that will be cheaper for us in the long run and will help us be healthier and make better choices about what we are eating, not to mention what and how we cook.  Perhaps the SNAP program could throw in cooking classes modeled after the ones people pay big dollars to take.  It would be beneficial to families and get them out their homes and experiencing new things.

In any case, the goal should be to find a way to get allocated food dollars to the table instead of penalizing people for both needing them and trying to work.

Grainne Rhuad- In a time when many in our country are going hungry some states are left with as much as $4.9 billion in allocated Food Benefit Funds left on the table each year.

Libya Exemplifies Everything Wrong with the War on Terror