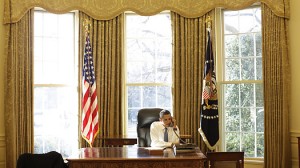 (Most of you are aware that President Obama made an official statement right after Tuesday’s election, referring to the thrashing the Dems took as “humbling” – then went on to offer an olive-branch to the Republicans by way of ‘working together’.

The Republicans, on the other hand, sufficiently disabused both Obama and the rest of the country of any notion of bipartisan cooperation – in his victory-speech, John Boehner called the election a ‘repudiation of Washington’ and promised to repeal the health-care bill.

It’s evident that cooperation isn’t on their minds. The choice for Obama and his administration, it would appear, is akin to the one given condemned criminals in Utah back in the day – the choice between being hung, or shot.

Either way, absent a miracle it’s looking more and more like one-and-done for Obama. He did it to himself, by pandering to the special-interests, the military and the mob. The mob has returned the favor by taking a great big bite out of that hand-offered-in-friendship.

This action has to be decisive –and it has to make up for two years of lost time. Rather than publicly acknowledge that a can of whup-ass had been opened on his agenda, he should have said something like this:)

I have let you down.

You voted for change – and in the first thirty days of my administration, I could have done what I’m about to do, but instead the only thing I accomplished of any note was to hold a Super Bowl party and rubber-stamp a lot of the prior administration’s initiatives.

I’m here to tell you that the change for which you voted is here, and will begin tonight.

If I’ve learned anything from this election, it’s this – courage requires the acceptance that loss is inevitable. A soldier on a battlefield, to be effective, has to accept that his death is a likely outcome of his actions. An athlete on the field has to accept that loss is an outcome of competition. A businessperson knows that, when founding a business, only 50% of new companies survive their first five years.

I have accepted, in stark terms, that I will be a one-term president.

My greatest mistake was in believing that I could make a difference by not acting, and by waiting for others to see the light through gentle, intellectual persuasion. I see now that this is not the case.

Unlike most of my critics, I studied the Constitution in law school. I see nothing in that document which declares Congress a ‘lame duck’ after an election. To that end, I am instructing the current Majority Leader to draft legislation extending unemployment benefits indefinitely, or until the current unemployment rate is below 5%. A vote will be taken on this measure when Congress is back in session, and before the Thanksgiving holiday.

Further, I am directing her to draft legislation, in concert with the Federal Elections Commission, to create a publicly-funded elections program. This legislation will effectively prohibit the outright purchase of an election such as what we’ve just seen, and will also severely curtail the actions of political-action committees and lobbyists.

To those who will scream that this is a restriction of free speech – again; I’ve read the Constitution, and there’s nothing in it that guarantees a person the right to shout ‘fire!’ in a crowded theatre – or to purchase influence by way of campaign contributions. We have laws against graft and corruption. Once this new bill is law, we will begin to see a government which reflects the true nature of the country – and not the interests of a few.

Lastly, I am directing the Speaker to assist in the preparation of legislation to make permanent the effects of my next actions. The remainder these actions will take the form of executive orders. They are as follows:

1. By executive order, I am closing the detention facility at Guantanamo Bay, Cuba. All detainees will be transferred to Federal prisons where their cases will be reviewed. Any for whom legitimate cases cannot be brought will be repatriated to their home countries.

2. By executive order, I am issuing a 90-day stand-down in Afghanistan and Iraq. Command authorities in those countries will be given one week to create a plan for an orderly withdrawal of troops. By late winter, 2011, every soldier in both of those countries will be home. In the event this is considered a sign of weakness, please understand – our commitment to the defense of our borders is as high as it has ever been. Any attempt made by any nation, person, or power to interfere with that withdrawal or to otherwise attack our country or its interests will be met with force. We will not, however, continue the dreadful practice of my predecessor in conducting undeclared wars.

3. By executive order, I am repealing the Patriot Act, the Military Commissions Act and other orders issued by my predecessor which either violated Constitutionally-guaranteed civil-liberties or restricted same. A full list of these repealed acts and orders will be made available tomorrow morning.

4. By executive order, I am ending the policy of ‘don’t-ask/don’t-tell’ in the U.S. Military.

5. By executive order, I am ordering a hard-stop on any and all foreclosures of privately-owned homes in the United States and an immediate investigation into the loan-and-foreclosure practices of the nation’s banks. I will not see another family evicted in America until we can sort out the mess caused by Wall Street and the banking system.

Folks, the other day I saw a car – it had three bumper-stickers; one read, “We are creating enemies faster than we can kill them”. The other read, “If you’re not outraged, you’re not paying attention.”

The last one read, “Be the change you want to see in the world.”

Personal philosophies can’t be summed up in bumper-sticker language. Neither can national policies. However, you hired me to be the change you wanted to see, if not in the world, at least here in America.

I can promise you this. From now on, I will be the change which most of you want to see. We will cease creating enemies in the world. We will pay attention to your outrage, and to that of the family of nations. We will begin to repair – permanently – the problems our predecessors have created.

I will take more action over the next two weeks – action involving regulation of the financial markets, the insurance companies, and to begin dealing with the mess that is health care in America.

I owe you that.

Yes, I’m going to be a one-term president. And, that’s fine with me.

To my opponents – bring it on. I can deal with it.

To all of you, I’ll end by quoting one of my favorite T.V. pundits – good night, and good luck.”

The Republicans have promised gridlock. Obama offered an olive-branch, which won’t be accepted. W.D. Noble offers us an alternative – the speech Obama should have made….